Following Sunday’s 1-1 WSL draw with Manchester City, Jonas Eidevall pointed to an improved team structure that is helping Arsenal to achieve better results in big games. Last season, the Gunners lost all four of their encounters against Manchester City and Chelsea and also lost away at Manchester United.

This season so far, Arsenal have beaten Manchester City and Chelsea at home, United away and drawn away at City. In previous seasons, Arsenal had struggled to play out against high pressure against the bigger teams.

On Sunday, Arsenal used some routines to play out against City’s pressure, which we analysed here. However, Jonas said that some of the routines we saw were not specifically prepared for the City game.

“It’s fundamental to us, we want to be a team that builds out from the back. But I want to share something because it shows how important it is to be a mature team in being tactically flexible because we didn’t necessarily prepare for City pressing the way that they did with Lauren Hemp. 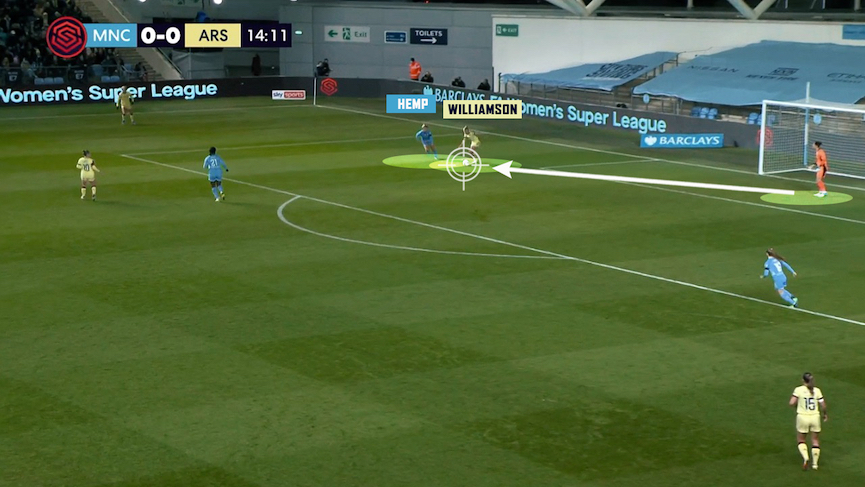 “We actually prepared for them to press a little bit differently. But the concept of having a winger who tries to force our central defender inside from out is something we have played against a lot of times this year, we have practiced it and we know which player it leaves free.

“The players were so quick in executing it. It was just for me and the other technical staff to reinforce it but I thought that was a really good sign of us being able to recognise something and adapt.

“For you to say when you watched it back it looked like we had rehearsed it the day before the game, that is a great testament to the players that they made it look like that. That shows we are maturing to resolve situations as a team.”

Eidevall also had praise for centre-half Lotte Wubben-Moy, who made her first start since December’s ill-fated FA Cup Final defeat against Chelsea and turned in an excellent display.

“I was very pleased with Lotte’s performance. She and the team had a tough FA Cup Final and what defines you as a player and as a team is how you move on from those moments.

“Lotte has been working really well in practice. She had a small injury that kept her out of the Man United game, otherwise it was the plan for her to play in that game too.

“I think she did really, really well against City. She made a lot of big defensive plays for us as well as her distribution, it was a great contribution from her.”

Hopefully we can find a way to get Miedema into games some more. Something seems off about her lately.

Something is definitely off. Miedema still seems to be doing her thing–but the team cannot create chances against strong opponents. Heck, it’s struggling to create chances against middling opponents. IMO the midfield and outside backs simply are weak in attack, especially against strong teams. Who does Arsenal have in the middle of the field that can put real pressure on a defense the way that Hemp or Harder can? Up front, Mead is talented, but beyond that? Parris has talent but hasn’t played a lot and, like Miedema, seems off her game. Certainly, having Heath on the field–for a change–will… Read more »

As I said before it’s exactly like the DvD situation. Down in the dumps for most of the season agonising about whether to stay or go and then once the decision was made she was back to her old self again.
Suspect it’s the same for Viv. She has a big decision to make and that is not conducive to playing at her top level. The sooner her future is decided the better for her and the club!

I do miss DvD though and I think the team was better with her than Jordan.