THE LOWDOWN
Arsenal travel to Kingsmeadow for the squeakiest of squeaky bum top of the table clashes. The Gunners lead Chelsea by two points at the top of the WSL though Chelsea have a game in hand so the situation could not be much more finely balanced than that. Jonas Eidevall’s side are still smarting from their 3-0 defeat to the Blues in December’s FA Cup Final at Wembley.

Arsenal have not tasted anything other than defeat at Kingsmeadow since a 5-0 victory in October 2018 that helped propel them to the WSL title. In the four games they have played in Southwest London since then, they have conceded twelve and scored three, two of those in a Conti Cup group game. It is not a good record.

The Blues have won ten consecutive home games at Kingsmeadow in the WSL and 16 out of 17 home games since the 2019-20 season was finished early due to coronavirus. It’s a formidable task for Arsenal but one they have to relish if they want to wrest Chelsea’s grip from the trophy that Arsenal monopolised for so many years prior.

TEAM NEWS
Jonas Eidevall told Arseblog News he was “hopeful” that Leah Williamson and Tobin Heath would be fit for this game. Williamson has missed the last two matches as her return from a hamstring injury continues to be managed, while Tobin Heath had to come off at half-time against Manchester United on Saturday.

Lotte Wubben-Moy will not be fit for this match, however. Katie McCabe serves a one-match suspension after being sent off against Manchester United but Arsenal have Mana Iwabuchi back after representing Japan in the Asia Cup. Rafaelle will be fit to start the game following illness.

A WORD FROM THE BOSS
“It’s not difficult to come up with a plan, it’s more difficult to execute it. We have a plan and I have big belief that we can do it. You have to be very good playing against them, of course, they have world class players but so do we. I am optimistic about our potential to get better and better because when you think about all of the new players we have brought in, they had barely practiced together before.

“With Chelsea, you could see that last summer they didn’t sign many players and they didn’t lose many players. That’s a consistent squad and that’s what we want to achieve over time. Our focus this week has been on what we need to do and what will bring out the best version of ourselves. I admitted that last time (before the Cup Final) I focused too much on Chelsea and not enough on ourselves and I can’t make the same mistake twice.”

LAST TIME OUT
When the teams met at Wembley in December in the FA Cup Final, Chelsea were 3-0 winners with goals from Fran Kirby and a Sam Kerr double. In the reverse fixture back in September, the Gunners were 3-2 victors with Vivianne Miedema and a Beth Mead brace at Emirates Stadium.

THE OPPOSITION
Chelsea fell into a similar funk to Arsenal after December’s FA Cup Final victory over Arsenal, they were eliminated from the Champions League after drawing with Juventus and losing at Wolfsburg. They also dropped WSL points with defeat against Reading and a draw with Brighton. However, they now have Ji So Yun and Sam Kerr back from the Asia Cup and seem to be coming to the boil in terms of their form.

They have beaten Manchester United and Manchester City in the last few days at Kingsmeadow, which will warm them up nicely for the visit of Arsenal. They will know full well that a victory will put them into the box seat for the title race with a one point lead and a game in hand to boot. Chelsea have already secured silverware this season with the FA Cup (though it’s technically last season’s FA Cup) and have a Conti Cup Final against Manchester City to look forward to in three weeks’ time.

In recent big games, they have not started Harder, Kerr and Kirby together upfront and though some of that has been enforced by the absence of Sam Kerr at the Asia Cup, I suspect Hayes will do likewise in this game, with Harder and Kerr to start together and Kirby giving way so that Hayes can play her preferred 442 formation. Chelsea have probably the deepest squad in women’s football and plenty of match winners on the bench as well as the starting line-up.

A closer look at how the Blues secured three vital points against Man City at the weekend! 🎥

PLAYER TO WATCH
Whether she starts upfront alone, alongside or just off Stina Blackstenius remains to be seen but in games like this, Arsenal will always look to Vivianne Miedema. Her end-product was not at its usual levels either side of Christmas for, in my view, a number of reasons. Chiefly I think the absence of Leah Williamson disrupted Arsenal’s build-up play- particularly the speed and direction of it and Miedema dropped deeper far more often in search of the ball.

Miedema has always drifted away from the frontline but Arsenal’s build-up play has been slower, making the tactic less effective in recent weeks. Under Eidevall, I think there is a very definite idea in the coach’s mind of when Miedema drops deep and when she stays high, whereas under Montemurro that was left more to the player’s intuition. I think it maybe took Miedema some time (understandably) to adjust to that. 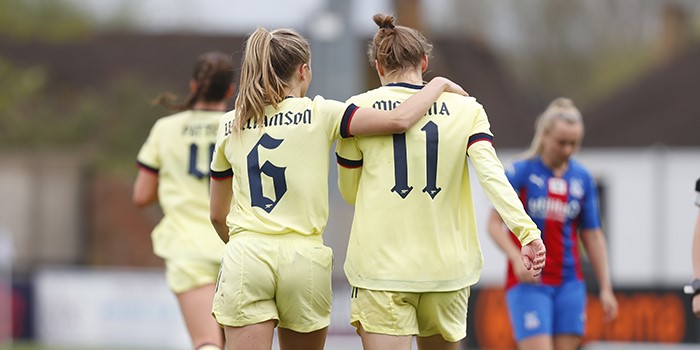 I do feel there has been a ‘click’ in recent games, with predatory goals against Brighton and London City Lionesses and a sensational assist from deep against Manchester United. In this fixture in the past she has been totally starved of the ball but if Eidevall and Arsenal can solve that problem on Friday, there is no doubt in my mind that Miedema will flourish. If she gets the ball in dangerous areas, she is unstoppable. The key is getting the ball to her in a zippy and precise fashion. 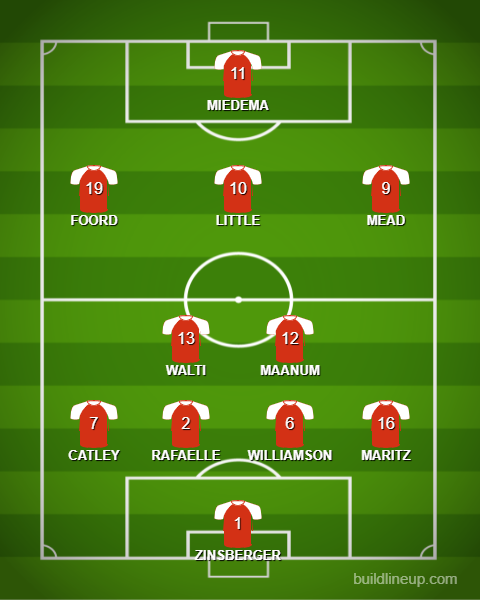 HOW TO CATCH THE GAME
The match takes place at Kingsmeadow on Friday night at 7.45pm and is a sell-out. The match is being screened live on Sky Sports in the UK and will also be carried by your local WSL broadcaster wherever you are in the world.

Previous articleArteta: We want to keep Saka as long as possible
Next articleNo Tomiyasu, ESR and Pepe on the bench: Wolves v Arsenal team news

Half an hour gone. So far so good. What a difference Rafaelle makes!