The Gunners currently hold a two-point lead at the top of the table but Chelsea have a game in hand. This is an opportunity to put an eight-point gap to Chelsea before they play again- albeit leaving Chelsea with three games in hand- and put the pressure on Emma Hayes’ team to have to win all their three games in hand.

Reading will be no pushovers, however. They are only one point behind Manchester City in sixth place in the table. They were taken to extra time before losing their FA Cup 5th round tie away at West Ham on Sunday but they have been on a very good run since the autumn. Prior to their 4-1 defeat at Brighton last time out, they had won five consecutive WSL games and had won seven of their previous eight.

Jonas Eidevall was able to completely rest Vivianne Miedmema, Stina Blackstenius and Rafaelle, Leah Williamson and Noelle Maritz were given the majority of the second half off on Sunday. There has been an opportunity for the coach to shuffle his pack and have his team as ready as they can possibly be for the big week ahead in the WSL title bid.

TEAM NEWS
Jonas Eidevall said he is “very hopeful” that Beth Mead can return to the squad after she was rested as a precaution on Sunday. Beth picked up a knock on international duty and was also rested for England’s game against Germany last week. The situation is exactly the same with Laura Wienroither, who was also carrying a knock but should be available.

Lotte Wubben-Moy should also be in contention, with Eidevall suggesting she could have been involved against Liverpool at a push. Arsenal have no other injuries at the moment, meaning they have 22 fit players for 20 squad positions, so three players will have to drop out- one of whom will likely be third goalkeeper Fran Stenson.

A WORD FROM THE BOSS
“If we win all of the games we have left this season, we will win the FA Cup, we will win the Champions League and we will probably win the league as well. The only thing we can do right now is do our best against Reading. What Chelsea are doing and what Chelsea are thinking is not my problem, I care more about my pancakes this evening! My focus is Arsenal and maybe pancakes.

“Apart from their last two games, Reading have been in amazing form, they have had amazing results, they are a top team and we expect it to be a top game. The lesson from this league this season is that you have to respect every opponent going into a game and make sure you do the basics.”

LAST TIME OUT
The last time Reading came to Meadow Park was on the opening day of the 2020-21 season when Arsenal were 6-1 winners thanks to a hat-trick from Jill Roord and a brace from Vivianne Miedema and a lovely volley by Kim Little. Arsenal legend Dan Carter scored a consolation for Reading. In the reverse fixture this season, Arsenal were 4-0 winners at the Madejski with efforts from Jen Beattie, Beth Mead and another Vivianne Miedema pair.

THE OPPOSITION
Reading have been part of the WSL’s middle tier for a number of seasons now, which is to their enormous credit considering that the men’s team has been in the second tier for some years now too. Pound for pound, not many clubs can boast the sort of commitment to their women’s team that Reading can. Historically, they have been difficult opponents.

This season started very ignominiously for the Royals, they lost their first four WSL matches without scoring a goal. Some (me) started to wonder whether Reading’s fairy dust was starting to wear off and whether we would see them begin to drop from the WSL’s middle tier into its lower tier and maybe even back to the Championship.

Not a bit of it, after those first four games won seven and drew one of their next eight and have firmly established themselves in the league’s middle class once more. With the long-undervalued Natasha Dowie upfront, Kelly Chambers’ team have found a new edge in attack. Star midfielder Fara Williams retired last summer and much of the Royals’ transfer business was finalised late in the summer window. Reading are very clearly back to their old selves again.

PLAYER TO WATCH
With player of the match performances against Liverpool and Chelsea in Arsenal’s two most recent games, Caitlin Foord is stating her case in a busy and competitive frontline. I think the Australian will keep her place in the team but in one of the wide positions with Beth Mead likely reinstated via the bench on Wednesday.

Foord has shown different sides to her game in recent weeks. Against Chelsea, Foord both managed to create dangerous one-on-one situations from the left and shut off the right flank that Chelsea most like to attack in a battling performance.

She led the line against Liverpool and came away with two goals and an assist from centre-forward. It feels like Caitlin’s form is coming to the boil at exactly the right time. She told the Offside Rule podcast recently that she felt re-energised after the Asia Cup and that has certainly shown in her performances since she returned from India. 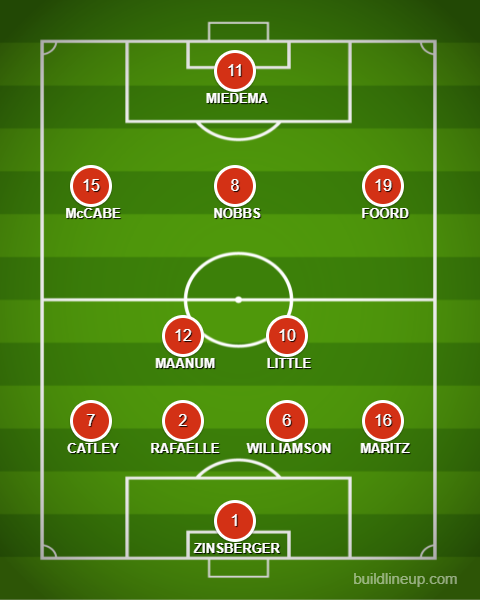 HOW TO CATCH THE GAME
The game takes place at Meadow Park on Wednesday evening at 7.15pm, tickets are available here for £8 adults and £4 concessions if purchased online before 2359 on Tuesday. Otherwise, tickets can be purchased on the gate for £12 adults and £8 concessions. In the UK, the game will be screened live on BBC iPlayer and Red Button. Check with your local WSL TV provider if you are based outside the UK.

COMING UP
We will have the usual post-match reaction from Jonas Eidevall on the site on Wednesday evening and the usual post-match reaction video too. We have two Arsenal Women Arsecasts prepared for March, one will be a mailbag episode, the other will look ahead to two massive games at the Emirates against Wolfsburg and Spurs at the end of the month and will feature cameos from Steph Catley, Caitlin Foord and Lydia Williams.

Previous articleJonas Eidevall: ‘I would like more goals from midfield, it is an ongoing process’
Next articleReport: Guendouzi agrees three-year deal with Marseille