THE LOWDOWN
Arsenal travel to Brighton on Sunday evening in the WSL looking to extend their eight-game unbeaten run and stretch their lead at the top of the league. Chelsea’s resounding win over West Ham in midweek, completing one of three games in hand they had over the Gunners, reinforced the message that Emma Hayes’ side are unlikely to be flustered by their situation.

Jonas Eidevall’s team hold a five-point lead though Chelsea have two games in hand at the time of writing. Chelsea will have finished their game at home to Aston Villa by the time Arsenal kick off in Crawley. Following this game, Arsenal will play at home in two different cup quarter-finals- Coventry United in the FA Cup followed by Wolfsburg in the Champions League.

Throw in a North London derby before March is out and it’s an intense schedule for Arsenal. But their main focus has to be on Hope Powell’s resolute Brighton side, who gave Arsenal a scare in the reverse fixture in January. On the road, Arsenal have generally made short work of the Seagulls but Brighton have shown many times that they are capable of upsetting big teams.

For Arsenal, it’s a case of blocking out whatever Chelsea do earlier in the day and not thinking ahead of the challenge at hand in Crawley on Sunday evening. They have had a week to prepare for this game and will have a whole five days before taking on Championship outfit Coventry United, there is no excuse not to be fully focused on taking another three points on the road.

TEAM NEWS
Tobin Heath will miss this game after requiring an injection in her knee, Jonas Eidevall says she ought to be available again next week but just needs to stay off her feet for a couple of days. Nikita Parris returns to the squad after a two-game absence with an unspecified injury. Everyone else is available for the game.

A WORD FROM THE BOSS
“In your first season as a Head Coach you obviously want successful results but you also need to use your ears and your eyes more than you use your mouth because you need to understand the environment that you are in. You need to understand your players, not just as footballers but as people as well.

“You need to understand what their motivations are and what their potential is and I think that can cost you some points sometimes, because you need to be brave enough to try things and see things so that you can learn. I think what I am most pleased with is that we have balanced that in a good way, we have got results and we are in a good position but it hasn’t compromised the process of development. We had great results at the beginning of the season but I think we are a better football team.”

LAST TIME OUT
When the teams met in January at Meadow Park, Arsenal turned around a 0-1 halftime deficit thanks to a Vivianne Miedema goal and a stunning Beth Mead free-kick to give the Gunners the points. In this fixture last season at Crawley, Arsenal were 5-0 winners with two goals from Vivianne Miedema and one each from Lotte Wubben-Moy, Jen Beattie and Danielle van de Donk.

THE OPPOSITION
Brighton are the ‘streakiest’ team in the WSL, Hope Powell’s side are experts at stringing sequences of results together. Just check their form since December 2020
LLLDLLWWWWLWWLLWWLWWLWLWWLWWLLLLLLDLLLWW

Not many draws in that sequence, Brighton are a compact side that try to make life difficult for opposing teams with a low block before springing on the counter. When it works, it really works. The problem for Brighton comes when they concede and have to slightly change tack.

They have won their last two games so they are in the wrong part of the streak from an Arsenal perspective. Since winning promotion from the Championship in 2018 under the guidance of Powell, Brighton have become part of the WSL’s established middle class with a sixth placed finish last season and something very similar likely for this campaign too. Brighton will wear their third strip tomorrow, which is yellow and blue, as a show of support for Ukraine.

Matchday -1. 👀 Looking back at our last outing in @BarclaysFAWSL… 💭🤩 #BHAFC pic.twitter.com/8hsLUPzfOH

PLAYER TO WATCH
Lia Wälti is arguably Arsenal’s most in-form player at this moment in time. The Swiss admitted to Arseblog News shortly before Christmas that she struggled to adapt to the changing demands of her position under Jonas Eidevall, with a more front-footed, aggressive approach. Under Joe Montemurro, we had been used to seeing her very consistently in front of and often dropping into the backline and distributing from deep.

She still does that but now she is a significant part of Arsenal’s midfield press and her array of disguised passes, with both feet, have been used much higher up the pitch this season. Wälti’s form encapsulates the manager’s classic “nice headache.” In Jordan Nobbs, Mana Iwabuchi and Frida Maanum, there are three top class central players chomping at the bit for spots in midfield.

The form of Wälti makes it very difficult to countenance rotating her out, even just for the odd game, at this moment in time. “I think her performances since the end of January and in February have been brilliant and she has been a key part in the team’s overall development, both in build-up and in defence,” Eidevall told Arseblog News last week. 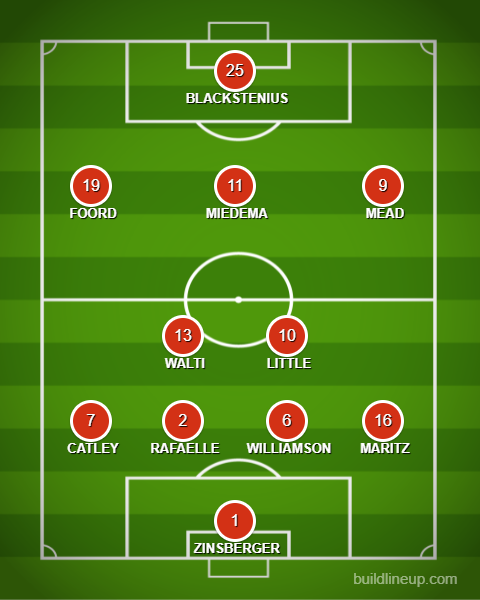 HOW TO CATCH THE GAME
The game takes place at Crawley Town’s People’s Pension Stadium on Sunday evening at 6.45pm. Tickets are available on the gate for £7 adults seated, £6 adults standing and £3.50 seated and £3 standing for concessions. The game is being screened live on Sky Sports in the UK.

COMING UP
We will have the usual post-match reaction from Jonas Eidevall on the site on Sunday evening as well as the post-match reaction video. Next week we will also have a new episode of the Arsenal Women Arsecast with a look ahead to the Wolfsburg tie with German journalist Jasmina Schweimler with a cameo from Arsenal’s Aussie trio Steph Catley, Caitlin Foord and Lydia Williams. Hopefully you caught the Arsenal Women Arsecast March mailbag episode with Tim, Alex and Pippa that dropped on Tuesday.

After that initial 4 W streak, they have not won more than two in a row.
I’d say we’re on the good side of there streaks.

An important day in the WSL and I’m trying to watch two games simultaneously! I’m right behind Villa who are doing quite well but there’s still a good hour to go. Mixed feelings about Spurs v City. Normally I’d want City to win; they have some of my favourite non-gunners (Caroline Weir, Lauren Hemp, Hayley Raso), and they’re not Sp*rs! But then I want that other team from North London to find some good form to take into their matches against Chelsea (but not at the Emirates). In the end, we’ve just got to win our games ….