Vieira is a 22-year-old midfield/attacking midfielder from Porto. Last season he was a bit of a utility man for the Portuguese champions, having played 50% of his minutes in midfield, 35% in attacking midfield, and 15% as a forward. He looks a lot like a modern hybrid player able to do a bit of everything but basically, he is a creative midfielder and for the stats that follow he will be compared to other midfielders (with the grain of salt needed that he played a bit further forward than typical). 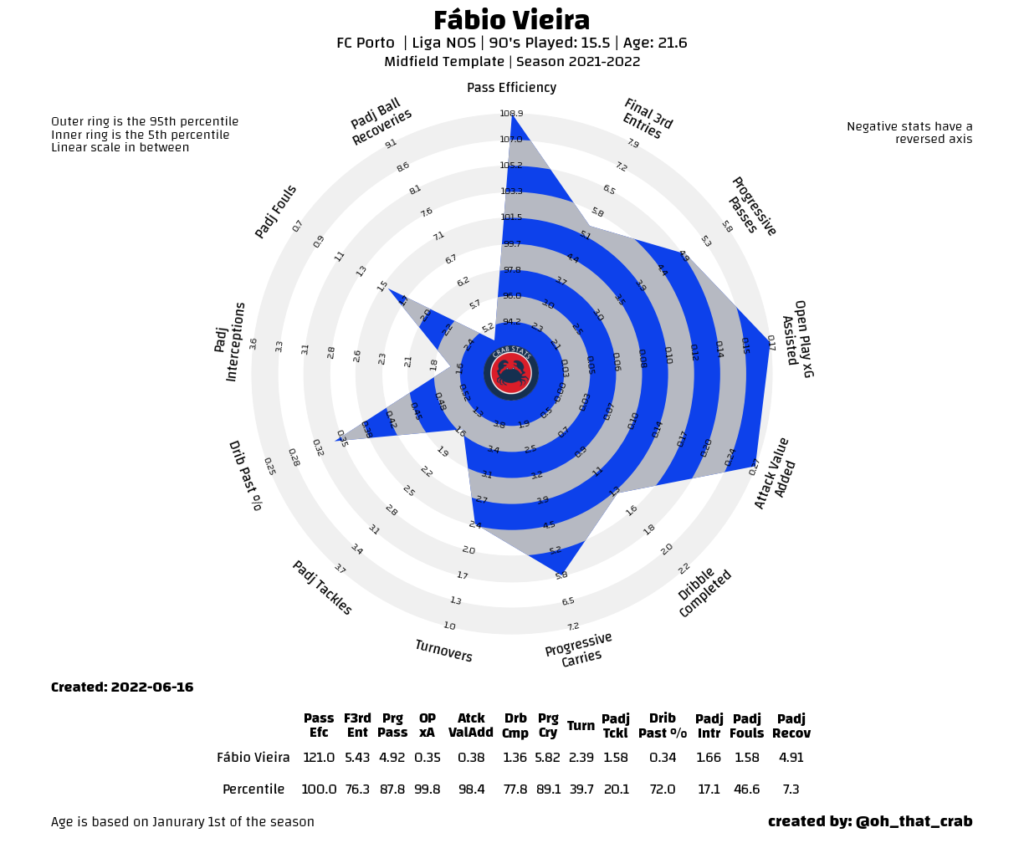 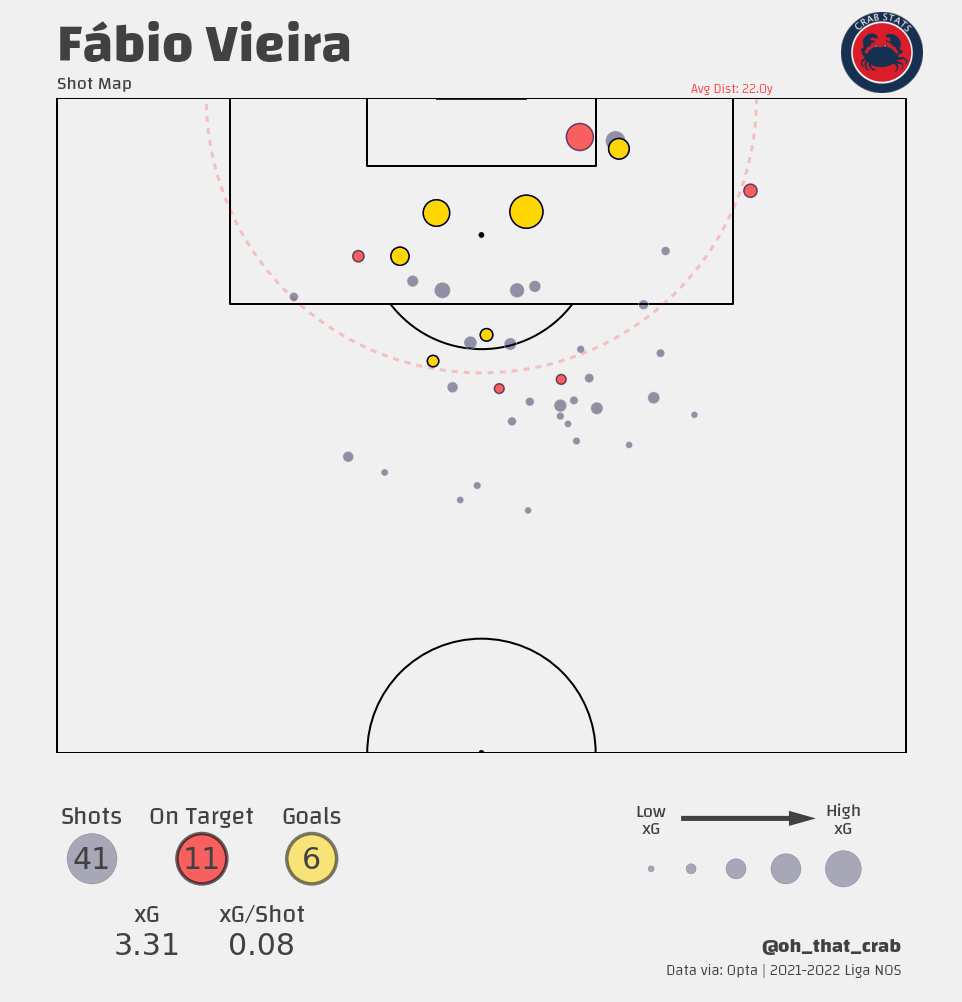 Vieira took a good amount of shots for a midfielder (about average for an attacking midfielder) but was very good at finishing the shots that he took. 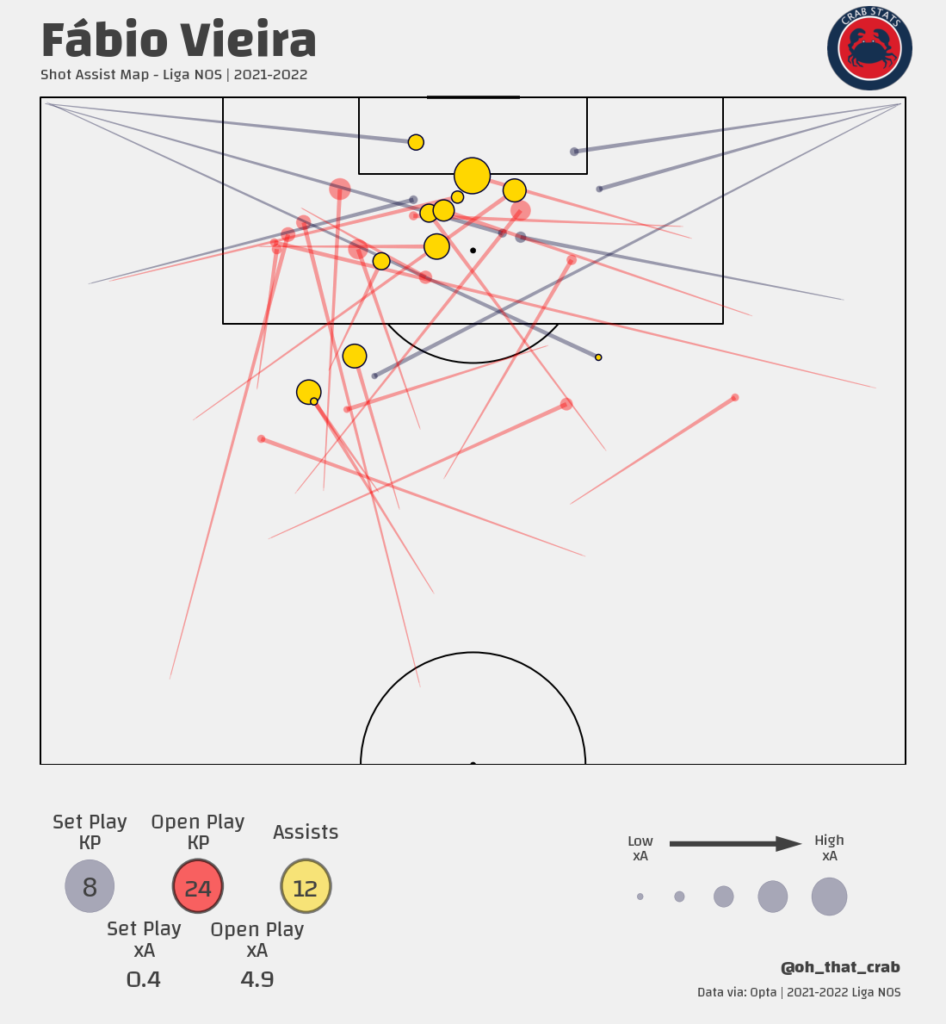 Vieira had 14 total assists but the graphic above only counts ‘intentional’ passes. Overall that is still a very impressive total, but again one where he significantly overperformed the expected values.

3.8 – Passes completed into the box per 90, 98th percentile for midfielders

5.2 – Deep completions (within 25 meters of the opposing goal) per 90, 99th percentile for midfielders 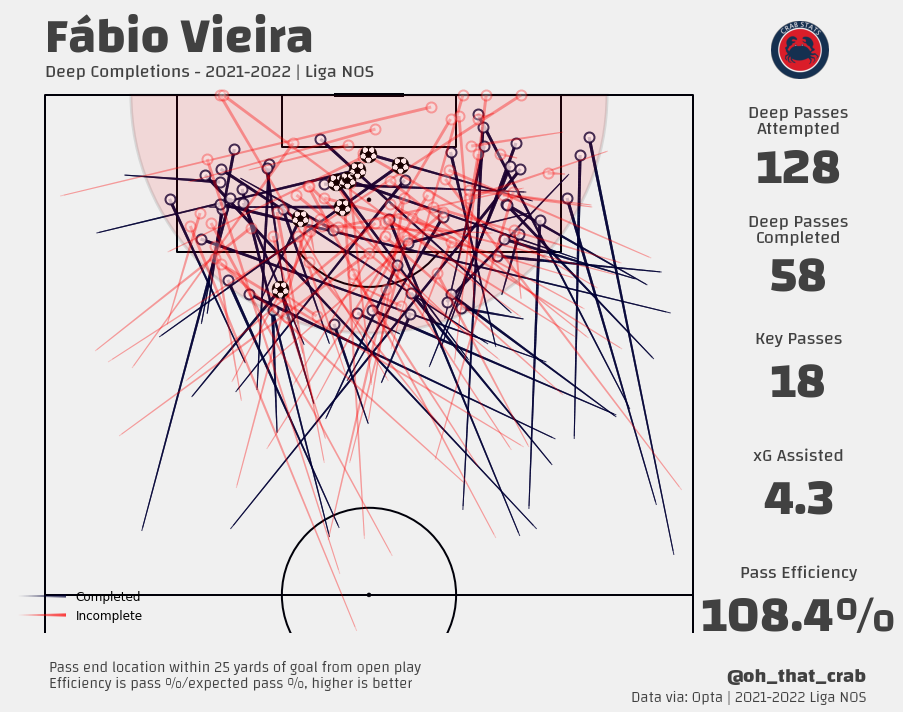 One of Vieira’s strengths is his passing, especially his passing that gets the ball into dangerous locations. His pass completion numbers are just okay 82.9%, but that obscures that he tries a lot of very hard passes and completes them at a very high rate. I have a metric called expected passing that tries to measure the average completion rate for every pass and uses that to judge how good a player is at passing, on this measure Vieira comes out looking exceptional. Below are all his passes attempted that had an expected completion rate below 70%. 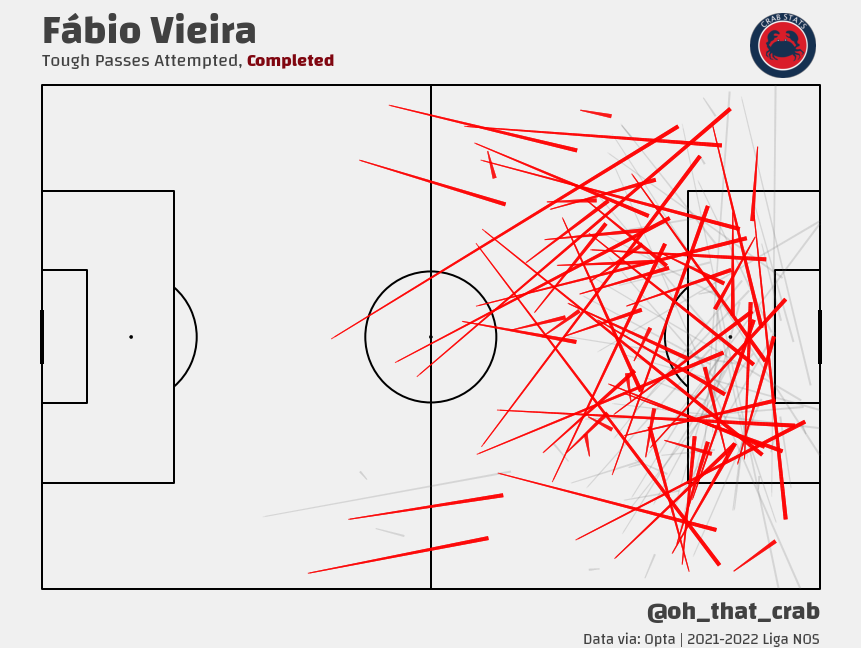 He attempted 107 of these passes and completed 71 of them, which is a 66.3% completion rate compared to 51.6% expected completion rate. That is ridiculously good for passes with this much value.

0.8 – Interceptions per 90, 15th percentile for midfielders

Vieira looks to be an exciting player with impressive statistics. The statistics should probably be taken with a bit of skepticism, however.

First, is that he played in several different roles and that can skew things (most notable here is that it probably boosts his attacking numbers and pushes his defensive numbers down).

Second, he is moving from Liga NOS to the Premier League. Liga NOS is not a bad league, it is the 6th strongest according to Club Elo but it has a very heavy tilt towards having 4 good teams, 1 okay team, and then a bunch of teams that would be on par with mid-table Championship quality.

With that out of the way, I still think that this is an exciting (but certainly not a sure thing) type of move. He should have the luxury of not having the pressure to step right into the starting elven right away if he proves not to be ready. My expectations are that he is being signed to bolster the rotation options for the team, most notable Martin Odegaard who doesn’t have a like-for-like replacement on the bench. 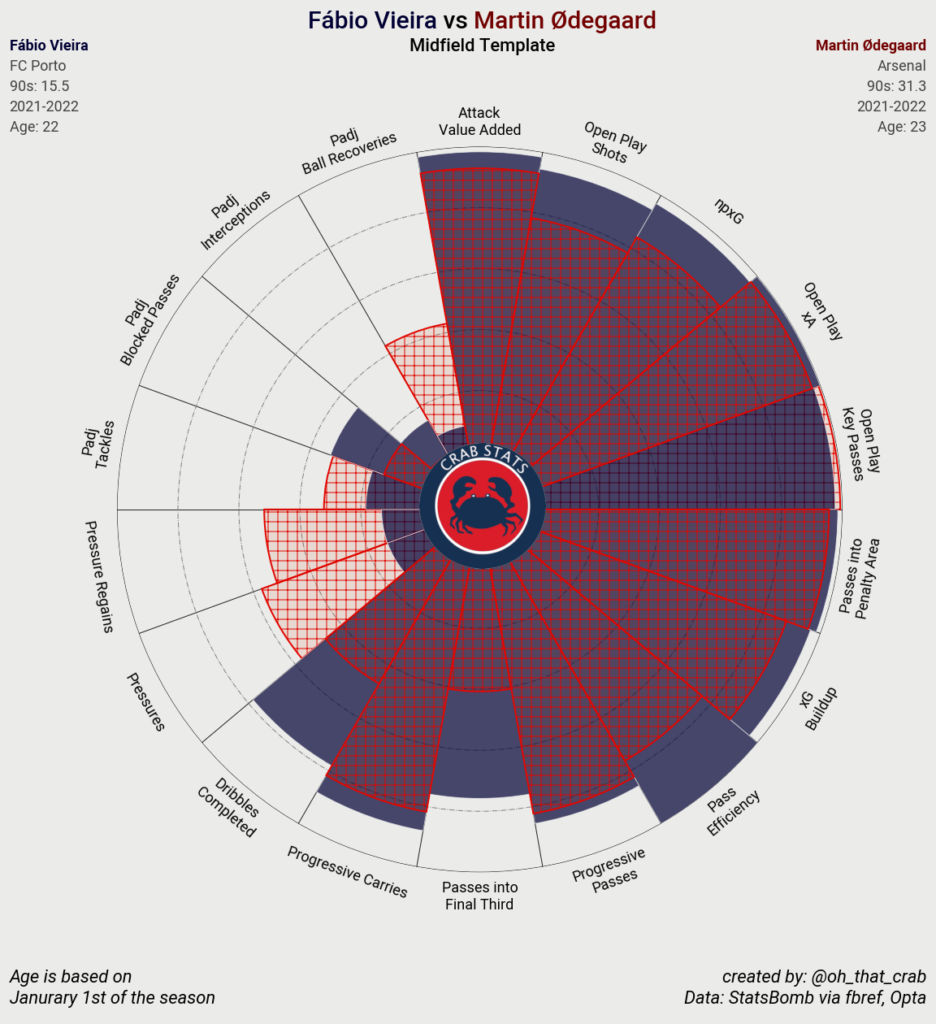 Vieira will likely start as a rotation-type option, giving depth and options to mix and match across the attacking line and midfield (probably against select opponents or when chasing the game). His fee (in recent terms) is in line with that sort of role and I think that he will probably see a step back in his stats with the change of league. That still leaves a signing with the potential for very high upside and brings back a bit of the diminutive player maker that the team used to stockpile for fun.

Sources: Opta, my own data base

Google translate tells me that “vieira” is the Portuguese word for scallops. Is this really true? How odd. I do love scallops though.

Hmmm, that smells a bit fishy.

I know my plaice.

Are you trying to gill-t me into thinking of another pun?

I haven’t yet come up with another one, so give me a while to mullet over

Nice one. I was worried you might clam up.

Am I the only one that thought this ‘fake scallops made out of white fish’ comment was heading off down a very dark avenue?

Nothing odd about it. Solid name.

Good numbers for an attacking player

Lots of good signs though the one number not mentioned is the 67 inches he is tall. At 5′ 7″ and pretty thin he may struggle with the physicality of the PL. He may have a higher chance of injuries, like Santi, given that. Hopefully not, would love to see him succeed.

Yeah, when I watched his highlight reel, I immediately thought “Yeah, you’re going to get kicked a lot”. He can turn players so effortlessly that he will be the subject of a fair few tactical fouls.

But that doesn’t mean he’s going to be a shrinking violet. Some of the toughest players are diminutive in stature.

Santi was quite durable, if I recall correctly, except for that one nasty nasty injury. But I agree, the physicality of the premier league will take some adjusting to maybe a full season. Europa League games should act as a great way for him to get minutes initially.

Based solely on the highlights on youtube though, I fear he may not get all of the fouls he did last year, especially with biased refs who offer Arsenal no protection! But looks to be a great signing and can’t wait to see him do his thing

Also Santi – Help, my foot has fallen off

Yeah, but the rest of him was really durable

To be fair, any player–the biggest, the strongest, the most durable–can suffer a freak injury or a weird complication from what should be a minor one. I think of Santi’s terrible complications more like a disease than an “injury.” It had nothing to do with his size.

Mythical creatures can get lairy after a few butter beer’s…

Typos that are actual words get you every time

Fouls are counted as failed tackles

I wonder how good he is at set piece 🤔

Hi Scott. A question about his Porto stats. I read somewhere that a Leeds fan commented that Raphinha could have doubled his assists this last season if Leeds had players around him who could finish. That got me thinking about Vieira and his 14 assists last season for Porto. Do you know if they finished a good percentage of the chances he created – and perhaps he would have finished with fewer assists if he had played on a more average team – or if maybe it he should have finished with even more?

They were a very good team and yes I think that certainly helped his assist numbers. He still did seem to create a number of very good opportunities for them

A Different George
Reply to  chepetin

They had a guy that Liverpool just paid their first-born (well, Mane) to get.

@Scott
Reading James’ article for The Athletic, I am surprised to see so fundamentally different scores for Ball Recoveries and Interceptions. The Athletic’s chart shows him in the 99th percentile, and your position him quite low. Can difference comparison templates (you use Midfielder, while they maybe use CAM) make such a difference, or am I missing something?

Interesting read and some phenomenal stats, even he can even replicate 50% of that output in the prem this season it is a great deal