Arsenal Women will start their 2022-23 WSL campaign away at Manchester City on the weekend of 11/12 September. The Gunners will be looking to go one better on last year when they finished in 2nd place, one point behind eventual champions Chelsea. The first home game will be against Hope Powell’s Brighton on 18/19 September before closing out the month with a home game against Tottenham.

The team will also play three WSL home games at Emirates Stadium- precise fixtures to be confirmed- with their three Champions League home group games to be played at the Emirates too, assuming they negotiate their UWCL qualifier in late September.

The Gunners have a bye to the Conti Cup quarter-finals if they qualify for the Champions League group stages too. Other key fixtures to look out for are at home to Chelsea on 14/15 January, while the Gunners travel to West London for the penultimate match of the season on May 20/21. The return game at home to Manchester City will happen on the first weekend of April. 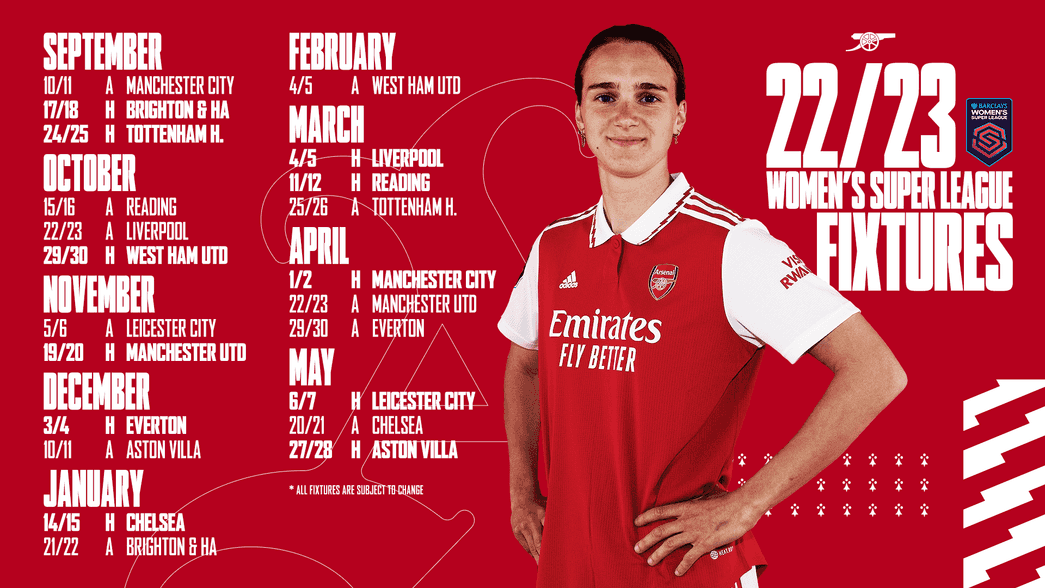 As there is no article about the win last night I just wanna say Beth Mead you are a fucking star!

My only criticism of Beth Mead is that sometimes she doesn’t seem to realise just how good she is.

Not good enough for Team GB apparently. How many hat tricks is that now?
It just shows what muppets we had in charge of our national team until Sarina was appointed!

That’s what would’ve made that hat-trick sweeter cause it was against Hege Riise’s nation of birth. Beth taking that snub personally & Im here for it

Have a look at Beth playing before the Olympics and you will see why she was dropped, by Sarina!

Sarina was still in charge of the Dutch team for the Olympics.

Although still in charge of the Dutch team, Serina had already agreed to take on the England job. As I understand it Serina and Hege Riise England’s temp manager agreed on the dropping of Beth. Given the on/off player Beth was at the time, and the absolute fireball she is now, I guess you could say the tactic was a complete success

I’m quite sure you’re wrong. There’s no way anybody who suggest a player move to a coach before official taking the job. Crazy suggestion.

A forward line up of Beth, Viv and Stina is pretty fearsome!

If only we could tempt Lauren Hemp to be a Gunner too. That would be truly scary for opposition defences!

If Miedema actually spent most of her time somewhat close to goal, so that she could, you know, get service and score goals, this would be nice. Instead, she spent the last half of last season basically playing the 10 role, with Stina as CF, and that, IMO, is not a smart thing to do. It did not make Arsenal better. Miedema, vaunted goal scorer, should be getting service and scoring goals. Duh.

Rather them than the boys.