THE LOWDOWN
Arsenal face Manchester United Women at Emirates Stadium on Saturday evening in the WSL as the league gets started again after the November international break. The international break was not especially kind to Arsenal with Jordan Nobbs, Beth Mead, Lina Hurtig, Manu Zinsberger and Laura Wienroither all pulling out at some stage of the international break- though most of them ought to be ready for this game.

Caitlin Foord and Steph Catley also played in Australia on Tuesday but Manchester United had their fair share of players away on international duty too. Jonas Eidevall’s team have a perfect record in the WSL so far this season, however, this is the first time this season that they are playing another member of the ‘big four.’

Thank you for your incredible support, Gooners 👏

United also had a perfect WSL record, they hadn’t even conceded a goal, until they were beaten 3-1 at home by Chelsea last time out. Winning this game presents a great opportunity for Arsenal to create a six-point gap to United in the table and maintain their perch at the top of the league. Arsenal are emerging from the international break into a more challenging batch of games.

As well as United, Arsenal face Everton and Aston Villa in the WSL prior to the Christmas break but also have four Champions League group games to negotiate, including a double header against Juventus and a home match with Lyon. They will negotiate the bulk of that without Rafaelle, Leah Williamson and Kim Little. We are entering a less forgiving block of the season for Arsenal.

TEAM NEWS
Vivianne Miedema returns after being rested for the Leicester match and the international break. Jordan Nobbs (quad) is fit to play, as is Lotte Wubben-Moy, who has also been nursing a mild quad strain. Manu Zinsberger and Beth Mead are available after having to leave their international camps for personal reasons. Laura Wienroither (foot) is also ok to play.

Leah Williamson and Rafaelle are both absent with foot injuries but Jonas Eidevall has indicated that both look good to return before Christmas. Kim Little is unlikely to play before Christmas with a medial collateral ligament injury, Lina Hurtig is out with a hamstring pull and Teyah Goldie (ACL) is also out.

A WORD FROM THE BOSS
It is a very tough opponent, Manchester United have started the season very well. I am so pleased that we can, again, sell such a high number of tickets at the Emirates. When we see these high standards remain and it was such a beautiful experience for the North London derby and together with our fans, tomorrow we want to try to create the same thing again.

The Emirates is one of our two homes. From the time that I have been here, we feel more and more that this feels like home. We feel more and more that is is a platform where we are able to share love for Arsenal with so many more people than just ourselves and the team. To share that and see how much energy that creates and the bond it creates between the players and our supporters, it’s beautiful to see and it gives us much more opportunity to do so.

LAST TIME OUT
When the teams met at Meadow Park in early February, Arsenal were held to a 1-1 draw- the only WSL match they did not win at home last season. Alessia Russo opened the scoring early on for United and the task was made even trickier for the Gunners when Katie McCabe was sent off with 15 minutes remaining. Stina Blackstenius equalised on 85 minutes after an outstanding pass from Vivianne Miedema.

THE OPPOSITION
United had a flying start to the season, winning their first five games without conceding a goal. However, they were beaten 3-1 at home by Chelsea last time out. After this game, United face Aston Villa and then Manchester City. After that block of games, we will have a better idea of where United might figure in the mini-league of four teams at the top of the WSL.

Privately, at least, their first priority will be to try to get that third place and Champions League qualification. Over the last two seasons, United have held a commanding position to qualify for the UWCL over Arsenal in 2020-21 and then City in 2021-22 only to stumble when they played their top three rivals in the spring.

United want to get over that line, in the first instance. They made some good moves in the summer to facilitate that with players like Nikita Parris, Aïssatou Tounkara, Lucia Garcia and Maya Le Tissier. However, they weren’t able to convince Jackie Groenen to stay this summer while Alessia Russo and Ona Batlle are delaying before extending their deals. One has to think that United will need UWCL qualification to convince them to stay beyond this season.

💬 Get to know Polly Bancroft, our Head of Women's Football, in her first interview since joining the club in October 👇#MUWomen

PLAYER TO WATCH
Vivianne Miedema returns after being rested for the match against Leicester and the subsequent international break. Miedema broke into the Heerenveen team as a 15-year-old and the Netherlands squad when she was 16. She has been on the treadmill ever since so some rest made sense for Miedema, as I set out in the video below.

The fact is, giving her a time out made sense because she is not in the starting eleven at the moment. The form of Frida Maanum in the number 10 role has kept Miedema out and the Norwegian shows no sign of slowing down, with a goal for her country against England on Tuesday night.

The first question is whether Miedema starts this game, in the first instance. If Jonas Eidevall was minded not to risk Jordan Nobbs following her minor quad tear, there is the opportunity to play Maanum as an 8 and play Miedema in the 10 role, or else perhaps Miedema gets a start as a striker? Whatever happens, one thing is for certain, it will create conversation! 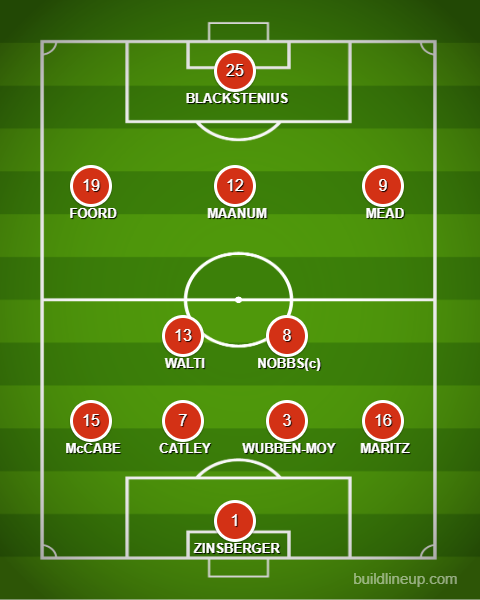 HOW TO CATCH THE GAME
The match is being played at Emirates Stadium at 5.30pm on Saturday and will be shown live on Sky Sports in the UK. Tickets are still available to buy here.

COMING UP
We will have the usual post-match reaction from Jonas Eidevall on the site on Saturday evening and the usual analysis piece will go live on Monday. We will also have a matchday vlog from Saturday available on Sunday morning.

If there is one criticism I have of our brilliant manager it’s that he doesn’t utilise Mana Iwabuchi nearly enough – she is a superb and skilful player who can contribute hugely to our midfield cause – as demonstrated by her performance in the England versus Japan international match last week.

This is nice. Has got me looking forward to the game. Hope the girls come out with a victory and maintain their 100% record.

Thanks a lot Tim, I had been checking the site daily for news about the women and finally grateful for the news. It would be nice to see Keets again even though I definitely don’t wish her team well in this particular context.

On Paramount+ in the US. I’m watching from Seattle. COYG 🔴 ‼️ ❤️