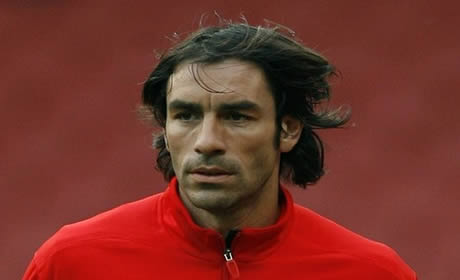 Arsenal’s dreamiest ever player, Robert Pires, holds the record for the most goals scored by an Arsenal player against Spurs with eight.

He shares that record with FA Cup winning bubbly-headed hero Alan Sunderland and some bloke who could have had the potential to be a real Arsenal legend but instead will line up with a cock on his chest on Sunday because he was an egomaniacal twat. Remember folks, sometimes the choices you make take you down a dark path.

Anyway, Pires reckons scoring against that lot is a bit special and says the game against them is huge for the fans and the players.

“I have big memories of the north London derby. Against Spurs, it is always a special game. It has particular meaning for the fans, and as players you always understand that.

“If you have the chance to score against them, it feels great, because it means so much to the Arsenal fans. Confidence is vital. This is a complicated game and for the team to have won in the build-up is important.”

Arsenal need someone new to come along and break Spurs hearts in every game, the way Bobby did. Even if they thought they might win, up he popped and they hated him for it. Which meant we loved him.

If I had a soul worth selling, it would go too the lowest bidder to have him in his prime on the pitch on Sunday. Ho hum, such is life.

Perhaps a grammarian upset over a superfluous o.

Some spurs scum on our blog

I used always like the part when he used to give it to the Spuds…HARD!

Bobby leaving was the start of all that is bad. Doom doom doom.

In other news Wednesday was a great atmosphere compared to the run in last year, and apparently not all of our players are shit. Not sure what to say to keep on the band-wagon of all the haters, but however depressing everything on earth is, there’s still a good chance the frimster will eat Jenas & send the twitch into oblivion. COYG

He’s gone to villa spooner, could’ent give a fuck about their transfers either

Hmmm… just the one like on this, have you sunk so low as to have to like your own comments… that is like giving yourself a high five after having a wank….

Article gave me a good enough laugh that I had to comment.

Like arseblog said in the arsecat: We are THE ARSENAL, they are eleven Cunts..

Well known for your rhetoric then Fred. Troll elsewhere or if there isn’t a spare bridge to go spit vitriol under , perhaps you could start a riot, you know smash up and burn out your community, all the rage your end by all accounts.

11 cnuts in a bucket still much better than Fred.

I opened the hidden comment, read it and disliked it……

A good many vlaubales you\’ve given me.

Just can’t wait to laugh on Sunday at your demise……..

Yeah I wondered why every single comment had just been minus’ed, you wee child you, just shows the mettle of you Spuds doesn’t it, no class.

Oh a spud, you lot not smart enough to have your own forums and news sites? Ok, as a fellow human, stay here and you might grow up and become as close as you can resemble a man.

that’s a big word for you, now how’s about you go for a little lie down. There you go 🙂

You may say that I’m a dreamer

So the media have linked RVP to MC. Injuries not withstanding, he is one of of only a few genuine wc players at Arsenal. I won’t be surprised if he leaves especially considering how Arsenal have drifted from one of the big four to a selling club.
All this thanks to Wenger.

rvp I think would go to real. They need a striker like him who can be consistant

Wenger says his ambition is to make Arsenal the best club in the world. He would have a chance in Jan by buying top quality players and not some average French/Spanish or german players or better still cheaper players and over the hill or my.
Only then will the fans and RVP believe him. Otherwsie to many others ,Arsenal will be a nursery for the financially doped teams.These teams if successful can fall back on lucrative sponsorships which would give the gunners a miss.

Funny what fond memories pop up around derby day. Like: “Gary Mabbutt was a cunt”, for instance.

Oh yeh, Gary Mabbutt. He was shit wasn’t he. Looked like one of those trolls you stick on the end of a pencil. Ugly twat. And ol’ jug ears on the beeb can fuck off as well.

Realistic Their midfield is stronger than ours: Fact ( Modric) JW19 I miss you
Realistic: They have stronger in form defenders ( Fact) TV5 and Kosser I miss you.
Realistic: We are still going through our “baby steps” sensitive process
BUT… we have credibility, we have history, we have class, we have the Pole in Goal, we have Oxtail, we have Per, we have Arteta, We have Arsene, we will overcome. because we are THE ASENAL.

and we have RvP! He can take care of their defenders any day, with his eyes closed

Modric is THE most overrated pile of skin and bones (and nothing else) I have seen on a football pitch. Arteta has more class in one toe than Modric. Plus, Modric looks like a fucking diseased malnourished ratbird, where as Arteta is a bit of a dream boat. This is a north London derby and as long as we want to win it more, we will win it. This is a great chance for the new players to really get the fans on their side so I think they might excel. I know our defence is a bit dodgy but… Read more »

Actually, I don’t know if anyone has seen the animated kids film “flight of dragons” from the 80s (at least that’s when I watched it) but he looks like one of the horrible little rat creatures in that, or like the Grand High Witch in The Witches when she gets turned into mouse. Yuckface.

[…] Pires tells Arsenal players that scoring against Sp*rs feels great. It’d be nice to see another thorn in their side emerge, and not one that developed a […]

Bobby is dreamy….
At one point one of the very best players in the world. That 1-2 move he did when he shuffled the ball from right to left foot and back again (or was it the opposite way? Fuck me even my Memory is twisted) Done Gerard at anfield to set up Freddie, done sp*rs defender to finish off the 5-2. Ahh!
Legends live forever

Arseblog: Simply the best! We just can’t have enough of U!!!

Just gone done the holloway rd and looked at our magnificent stadium, it really is a sight to behold! We’ll be walking round tottenham with our willys hanging out, getting excited now RVP hatrick please

And I know that I’m supposed to love you purely for your performances on the pitch, but I’m a woman and well….which footballer would I rather look at?!! Or see put the winner past the loathesome Spuds.

[…] Confidence gain by beating a team? Definitely though. Winning breeds momentum, and brings less pressure to the players, allowing them to perform better. I wouldn’t call them our strongest rivals, but doing well against our fiercest rivals surely helps boost morale and cheer the fans up. Robert Pires for one, understands what I mean. He says: […]

You all know what I wished?….that adebayocunt king scores an own goal!

This website uses cookies to improve your experience while you navigate through the website. Out of these, the cookies that are categorized as necessary are stored on your browser as they are essential for the working of basic functionalities of the website. We also use third-party cookies that help us analyze and understand how you use this website. These cookies will be stored in your browser only with your consent. You also have the option to opt-out of these cookies. But opting out of some of these cookies may affect your browsing experience.
Necessary Always Enabled
Necessary cookies are absolutely essential for the website to function properly. These cookies ensure basic functionalities and security features of the website, anonymously.
Functional
Functional cookies help to perform certain functionalities like sharing the content of the website on social media platforms, collect feedbacks, and other third-party features.
Performance
Performance cookies are used to understand and analyze the key performance indexes of the website which helps in delivering a better user experience for the visitors.
Analytics
Analytical cookies are used to understand how visitors interact with the website. These cookies help provide information on metrics the number of visitors, bounce rate, traffic source, etc.
Advertisement
Advertisement cookies are used to provide visitors with relevant ads and marketing campaigns. These cookies track visitors across websites and collect information to provide customized ads.
Others
Other uncategorized cookies are those that are being analyzed and have not been classified into a category as yet.
SAVE & ACCEPT
wpDiscuz
51
0
Would love your thoughts, please comment.x
()
x
| Reply