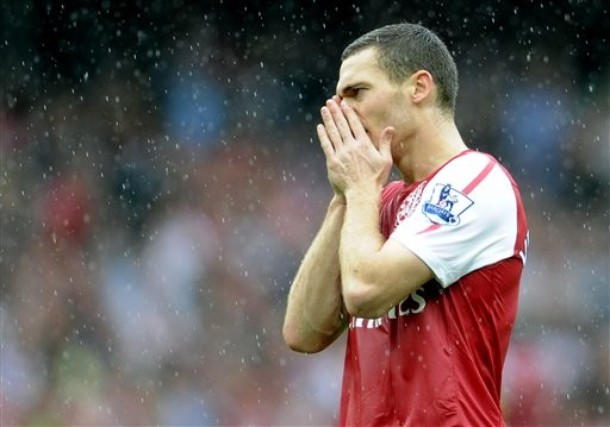 Arsene Wenger has confirmed that Laurent Koscielny will miss Sunday’s North London derby against Tottenham Hotspur and hinted that Alex Song will continue to cover in the centre of defende alongside Per Mertesacker.

The French defender, who missed Tuesday night’s win over Olympiakos with an ankle problem sustained in a challenge with Bolton’s Reo-Coker, is thought to have failed a late fitness test.

Koscielny will be joined on the sidelines by Johan Djourou, who is still out with a hamstring problem, and Sebastian Squillaci, who despite returning to full training is lacking match fitness.

Arsene Wenger also confirmed that Thomas Vermaelen’s return to first team action will be delayed by a further two weeks. The Belgian had been tipped to return to action straight after the mid-October international break, but will now likely not feature until November.

“Vermaelen will be a fraction late. One or two weeks after the international break,” confirmed Wenger in his weekly press conference.

THIS IS ALL POO….If only we had brought Cahill…. I jest not. I would have taken both him and Per. JD is lacking confidence, Kosser is bruised.. TV5 Nov return… MIQUEL I see you appearing in more EPL games. Please no Toto.
”
“A wise man was asked, ‘If you had your life to live over what would you do differently?’ He said, ‘The thing I look back on that robbed my life of the joy I had was worrying about things that never happened’. SO DON’T WORRY.

If there isn’t a problem with our medical team, balsa wood players or training methods, then my name’s Smeggy smeg Mcflange

what are you trying to say?!

what no one has said
Reply to  Anton

I beg to differ. In a top institute like Arsenal, it’s strange to fuck up on such basics as the medical team, whereas in teams such as Cardiff or Bristol Rovers, the injuries do not pile up as much as us.

a) down to bad luck,
b) due to Arsene Wenger’s training methods.

No matter what you think, it is just strange for a top sporting institute like Arsenal to consistently have injuries like this without even once asking if it’s the medic team’s fault.

No, your name is Anton Antonio McWank!

I’m sorry but we’re fucked. Looked how bossed around the park we were against Olympiakos without song in midfield, how do you think that’s going to be against the spuds? Very fucking angry right now.

People must stop moaning like a bunch of schoolgirls , we have a strong team and i think we have enough to beat spurs , have confidence in your team and support them , i know times are tough regarding injuries and what not but worrying about what could , should or would have been and feeling sorry for yourself not gonna help anyone , focus on the future and have faith in the team , Gunners Forever!!!

Save 75 cents
Reply to  Mr Adams

Finally someone who isnt a whiny little queef bemoaning our staff. Go Gunners!

Arsene is turning out to be one of those professors with fagged out brain. F**k arsene.

OMG…the Verm situation continues. He is about to be a BUST in my books.

I want coquelin to play ahead of frimpong on sunday

A day for the forgotten, and team news update ahead of Sunday. | Being Arsenal FC Bystander

[…] were also some team updates, with Koscielny set to miss out, whereas Vermaelen return has been delayed. This means Arsene has a decision to make in whether to retain Song at the centre back position, or […]

So I still think we will whoop ass on those spu*s fucks. But……….. This has now gotten ridiculous with vermaelin. I hate to say it but it’s time to move him on and replace him with someone who isn’t made if glass. We need a solid central defensive pairing. Not two different guys every three days. I’ll take subotic or hummels. Or fuck it, bring em both on.

Just like some were clamouring for Van Persie to be moved on a couple seasons back because he was made of glass ? Half you bastards can’t complain about players not being loyal to the club when your ever so ready to dump them like last weeks fish the moment you feel the ‘doom’ come upon you. Lighten up and show some faith.

I’ll show some faith in a player when he puts together a string of 15 good games. Tv5 has missed more games in his 3+ years at arsenal than I realon John Terry has missed in10+ years at Chelsea. And yes, I feel we should have moved rvp on 3 years back and replaced him with a proper striker. You know, an etoo or Ibra or aguero or a David villa. We would have won something.

He only missed the very tail end, 5 games or so of his first season, after getting a clattering against the Spuds…, as to his Achilles Tendon injury the next year, well it wouldn’t matter if you were Superman, you can’t legislate for those, and another niggly one this season, annoying, but they happen.He will be back by the end of next month, as far as I can tell that gives him a decent chance of racking up those 15 or so games your talking about, he is a great player, and more importantly, his attitude is spot on, its… Read more »

Another season looms of winning fuck all, yippee, can’t wait!!

A draw will not be a bad result for us, esp with all them injuries. Come on Arsenal!