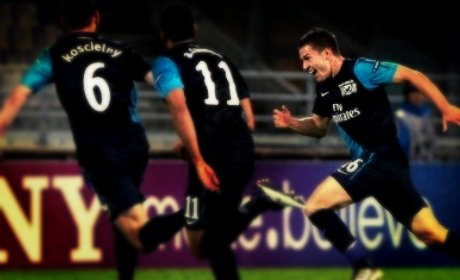 Arsenal in the Champions League

This was neither quick nor dirty: I spent way too Gods-damned much time on that graphic and it doesn’t even include historical data.

This data raises more questions than it answers but that’s always a good place to start research. For example, Arsenal are allowing 0.13 goals per shots on goal (OGPSOG) in the Champions League and yet 0.46 (almost one goal for every two shots that they allow) in the Premier League. What is the historical average for these two numbers?

Same with the defensive conversion number (percentage of opposition shots that turn into goals). Is this just an anomaly because of the Man U match or does Arsenal historically play better defense in the Champions League and why?

The fact that the offense numbers look the same should also be looked at. Do Arsenal track across all tournaments as closely this? Is this just an anomaly for this season? What does it say about our opponents in the Champions League and in the Premier League so far.

Like I said, lots of questions. Still, it is interesting that Arsenal are numerically playing much better defense in the Champions League than in the Premier League.

Watching the game yesterday I was amazed by the number of crosses that Arsenal put in. 46% of Arsenal’s attack came down the right side and it seemed like Jenkinson, Theo, Arshavin and Gervinho just kept bombing down that side and pumping in blocked cross after blocked cross. Arsenal seemed to win more corners and throws than goal attempts off our crosses yesterday.

In looking at the data, it turns out that Arsenal only had one successful cross yesterday: Djourou to Gervinho which led to Ramsey’s goal. That was counted as a successful cross because somehow Gervinho’s missed control was counted as an assist. If there were a “dubious cross/assists panel” that that cross/assist would almost certainly be ruled as a missed cross and a non-assist. That means that in the real world Arsenal attempted 32 crosses and not a single cross found its intended target.

Crosses are a low percentage pass already but zero of 32? Come on, you’re doing something wrong.

Of course when I see something like Arsenal missing a ton of crosses in a game, I immediately wonder if this is a one game phenomenon or if there is a pattern. So, I spent way too much time on the crossing numbers for Arsenal in the Champions League and produced this graphic:

Arsenal have the record for our group in terms of futility on crosses with just under 11% finding their target. A number which is hugely buoyed by the 5/16 v. Olympiakos.

Another odd thing is that the numbers show few teams are attacking Borussia and Olympiakos on crosses. BvB on average only has to deal with 12.3 crosses per game and Oly only deals with just under 16 per game. Meanwhile, Arsenal are dealing with 21.6 per game and poor Marseille lead the pack with 27.

And in terms of success rates, BvB only allows 3 per game, Marseille 3.1, Olympiakos 4, and Arsenal 5.6. In terms of percentages Arsenal top the pack again, with the opposition successful 26% of the time, Olympiakos 25%, Borussia 24% of the time, and Marseille the best in Group F with a stingy 11%.

Wolves 2-1 Arsenal: By the numbers

You may have spent way too much time on it, but I am glad you did, very interesting and thought provoking once again.

The crossing data is down right mouth watering stuff. I too had the impression that there were a lot of crosses coming in, but doing absolutely no good. This may be a Jenkinson Effect – he seems to have been brought in mostly for that purpose. His crosses look good (pace, angle, timing), but their positioning is worthless. That’s where your historical question comes into play – before Jenkinson arrived, were we this toothless from crosses? (Also, remember that before Sagna was injured, he too was not the marksman when it came to crosses.) It will be interesting to see… Read more »

I think the futility of our crosses has a bit to do with the fact that we don’t get enough people running into the box as we should. Jenks crosses are good if only we could get someone on the end of them. That’s been the case for a while (players not attaching balls coming into the box) both in attaching and defending. In defending I think we’ve gotten a bit better though.

That is just too funny “players not attaching balls coming into the box” childish I know, but funny 🙂

Jenkinson can cross the ball well, and that’s great, but he also, always, crosses the ball, even if a defender is standing right in front of him. I think he just doesn’t quite know what else to do, and is a bit panicky in possession sometimes and so we see all these blocked or missed crosses coming from him. I’m sure in time he will get better at choosing when to cross and when to pass back, and wait for a better opportunity. Unless our fullbacks can get ahead of the defense crossing, for Arsenal, is kinda dumb.

Kreame of the krop

I think it also has to do with the fact that no one on our team makes runs into the box when the ball is coming in from the wing. Just a thought.

Sabrina
Reply to  Kreame of the krop

2 things to note are 1. Chamakh started in the Olympiakos game with the Ox and Jenkinson on the right. Both had good crosses with a real target in the box. I would love to see a 442 with Chamakh-Park up front along with chamberlain-jenkinson and ryo-gibbs on the wings for the carling cup game vs bolton. 2. Walcott, Arshavin and Gervinho don’t like to cross and use that as a last gap option in order to win a throw or a corner and keep possession. Could be a reason for a lot of blocked crosses but this is definitely… Read more »

My favorite post on AN – now off to actually read it

[…] Arsene had seemed to switch to a 4-4-2 ish formation sometime around the 60th minute but Theo wasn’t a big enough target for the corners and crosses of which Arsenal was the model of futility hitting just 1 of 32. […]

Now here’s the thing – are we still shit or not? 5 wins in 6 games tells me we’re shit hot.

A bit of belief, a few more good results and well…..who knows?

Are these missed crosses, all blocks? Does this also include crosses that were made but were not met by anyone?

The crossing is all Opta data and I think they count it any time an Arsenal player even touches a cross. At least, that’s what it looks like considering Djourou earned a cross for the pass to Gerv.

the data is still inaccurate because it is manually recorded by human beings. the same human beings have not recorded the cross by walcott that RVP got a touch on. had he made a good connection it would have been a goal because the goalkeeper was in no-mans land.

@David seago (below, for some reason the “reply” button doesn’t show up on his post

The Walcott -> RVP cross isn’t counted because RVP was offside, and had he made a good connection it would have been a disallowed goal. It *was* actually a good cross though.

Interesting that the one game where we crossed well happened when we had Ox/Jenk down the side – I wonder what the crossing success % is for each player?

Very interesting. Thanks for sharing.

What caught my eye was in your first table: goals scored: CL 1.4 and PL 1.5 but shots per game: CL 11 and PL 18.25. Shots on target were about equal in CL and PL. Seems to indicate that, in the PL a least, we are shooting loads more but we’re rushing it and it’s not paying off.

great job with this analysis! i will look for more from you in the future… thanks!

Wow, amazing stuff. I couldn’t imagine football without it. Cheers

Ha! I was thinking of you when I posted Rambos numbers, because the only thing he did that really mattered was score a goal.

Ya it was a goal that counted for three points. I think we can all agree that those two stats were exactly what we needed.

Some of these stats are simply too much for my tiny brain to process.

Statto would be in awe.

I think there are number of reasons for the poor crossing stats: – Technically many of the crosses (and corners for that matter) were just bad: the majority didn’t even make it past the first defender – Our crossing tends to be aimless especially from Jenkinson and Walcott. They barely ever look up. It’s like as soon as they get the ball they are thinking “get to the byline and swing it in” – As someone pointed out above, we don’t get the numbers in the box to make it effective. We also don’t have the second man trailing behind.… Read more »

Just read the comment policy! Genius 🙂 Well done Arseblog, of only all forums were moderated with this kind of common-sense approach!

Agreed. I hate that text speak shit more than any kind of profanity or abuse. I drives me ape shit.

Finally, I’ve been expecting this for days…thought you changed your mind. Finally, the void is gone; the game feels complete. Cheers 7am. To add to other comments, I think Jerkinson’s crosses, although the best in Arsenal, are usually not well aimed. He seems to just cross the ball anyway. Also, he usually wants to get to the by-line and then hit it straight at an opponent. Dj’s cross was a bit away from the by-line and suprised the defenders (we usually have only one man against three defenders in the box). Also, if we will be crossing that much, then… Read more »

well, all is well that ends well. Now, we have a richer By the Numbers.
Good to see you guys sheathe your swords.
Cheers.

The evilness in 7am and Frog moved it to no-man’s land.

Arsene talks Koscielny and others, team news update for match against Stoke | Being Arsenal FC Bystander

[…] without Van Persie, I want to draw your attention to some statistics in the match against Marseille. Apparently, Arsenal attempted 32 crosses into the box for that game, and had virtually 0 (well one […]