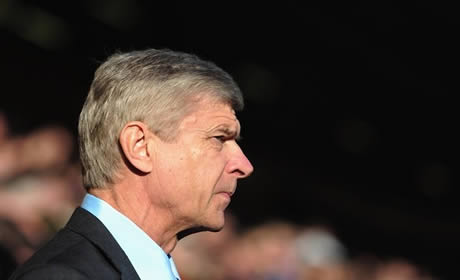 Arsene Wenger admitted his side were ‘naïve’ last night against Man City but was determined to focus on the many positives from the game.

An Arsenal corner turned into a Man City goal in 10 devastating seconds late in the second half, and the manager hinted there was a lack of experience involved.

Speaking at his post-game press conference, he said, “I felt we were a bit naive because it was a corner for us and a goal for them. I knew that we were in trouble and I feel we didn’t take enough time to take the corner because Djourou was just going up front and he had to stay at the back on the corner.

We didn’t leave him enough time to come back and that’s where we were caught. I felt we made it easy for them. They had a clear-cut chance and you couldn’t see them missing.”

Which is fair enough but in looking at the game in its overall context the boss was happy that his young team, bolstered by some current first team players and a couple of fringers with experience, held their own against City’s expensively assembled team.

“I cannot fault the team, they have shown heart, quality and desire. At the end of the day it is frustrating for the players that they are not rewarded. I feel that considering the youth of our midfield we have battled really well and have shown some fantastic quality.”

And the manager was quick to praise 18 year Alex Oxlade-Chamberlain who was a thorn in City’s side all night long, and he hinted his rapid development could see him more involved in the near future.

“He has surprised me by the consistency of this game. You pushed him off the ball easily two months ago but tonight you could see that his resistance in the challenges, his strength in the duels, is there. That is of course very important at the top level.

“I was very patient with him until now and I feel that it is important sometimes that you hold them back a little bit and keep them on the training ground. He has shown that he has improved a lot.”

And for those who accuse Arsenal of not taking the Carling Cup seriously, last night was our 9th consecutive quarter-final appearance.

It might not have ended as well as some of the others but there’s plenty to take heart from.

Hugely impressed with the youngsters last night. The Ox, Frimpong and Coquelin were all superb. I personally thought Frimpong was the best of the lot though I suppose that’s probably because I love Frimpong

frimpong will be a legend!he represents fans feelings about twats on twitter and field loud and clear!

Thought the lad were great. Wenger got it spot on though, that counter attack wouldn’t have had such a devestating effect against a more experianced side, however, thats almost the point of the approach being taken to the cup. Guess what this shows, is we can now rotate the squad properly against weaker opposition, and many more of our players can be given a game off when they need it. Chamberlin can deputise for Theo and Gerry. Frimpong and Coq can deputise for Arteta and Song. Miquel looks such a classy defender, so we’ve got another one. Everyone tells me… Read more »

for me, that was the best game since chelsea

I fully expected City to pin arsenal back and score a handfull of goals. The future is bright for Arsenal, Miguel, Coq, Frimpong, AOC. Arsenal just needs a better striker. In fact the whole front line of Benayoun, Young, and Chamakh looked the weakest kink in last nights game, should have been 2-1 to the Arse.

AOC was awesome, I bet Walcott is nervous

Ox was HUGE last night.He has this mclaren f1’s engine in his body.Boy played his heart out.I wish if chamakh had his engine.we could call him chamakherlain or chamox but i am sure the combination would be great.
Frim and Coq played brilliantly as well but you could see the rawness but these two guys are going to give arsene a headache next year which means no DENILSON!!!!!:D

Nice to see the Manchester City reserve team that would “easily get into the top 4” could only sneak a win against a team of teenagers and outcasts even after they had played their most expensive signing for more than an hour.

might we see a similar team next week against Olympiakos?

Would be good to see them get another chance to impress. Especially Alex.

Maybe just play one of Park/Chamakh and an extra midfielder? Diaby for example?

Good to see so many young talents in our squad shame not everyone got a game but nice performance by the team. OX was superb the ball seemed to follow him rather than the otherway round. Looking forward to nxt champions league game against olympiacos would love to see OZZY, AFOBE and DIABY.

To think how well a 4-4-2 formation can work with the youngster against city, imagine how good it would be to use it against a “weaker” team with our strongest squad *shivers*

Good grief.the energy and industry of the ox,frimpong and coq is breathtaking.city must be feeling lucky.

Positives:
Very Impressed by the youngsters and the way they dealt with a strong Man City side
The Ox should be above Arshavin in the perking order.

Negatives:
Chamakh and Park are lame and we definitely need to flog Chamakh in the January transfer window and bring in a more effective striker.
Gervinho needs to work on his shooting!

I do agree that both players dont look like they offer anything to the team. Chamakh looks lost he needs to leave, either on loan to another english team or be sold. I’m willing to give Park a bit longer, he hasnt had many chances so he might have more to give. But the one player who for me has to go is Arshavin, he looks disinterested whenever he plays. He is a long way off being the player that scored 4 at Liverpool all those months ago. He always seems to pick the option then loses the ball, and… Read more »

Great to see so much hunger from the younger players. They were fantastic.

Had we not had Chamakh and Park competing for best Fernando Torres impression up front a win was definitely on the cards.

If Sol could do a job for us, I believe Titi definitely can. But, he’s only “training” with us.

Wenger nids 2 sell chamakh nd arshavin nd replace them with either of Marko Marin or Reus,nd Seydou Doumbia and Lukas Podolski….life wld get a whole lot better if we do that

Haha!! Love the song SZCZ! It seems so weird to feel happy after an Arsenal defeat! This Arsenal squad is willing to give 100% in every game! No big time charlies thT just want to perform in big games. I noticed this even in Saturday against Fulham. I just new we would get a goal because we were pressing so well. If we had a confident striker last night we would of won. Ox, frimpong, coq, Miguel, theo, wilshere, Ramsey, Vermealen, Szs. Wenger is building a squad of good players and players who would run through the wall for Arsenal!… Read more »

I missed the game last night as well as the replay, but from reading the various reports/comments, Ox looks to be the real deal. Can he have more of an impact than Arshavin going forward? If so, he needs more first team love.

Very excited about the New Year, if we can linger around 3rd for another month, we only get stronger with Wilshere and Sagna being re-introduced into the mix. Sucks Gervinho will be missing in the New Year though!