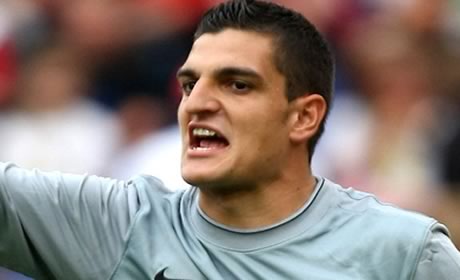 It is being reported today that Vito Mannone is fed up of life on the bench and wants to leave the club.

The Italian keeper is quoted in today’s Sun (yeah, we know!) saying, “The ideal situation would be to let me go on loan and then make it permanent.”

Mannone went to Hull on loan last season, playing 10 games to add to the 8 appearances he made for Arsenal the season before that. However, the emergence of Wojciech Szczesny means his chances of forcing his way into the first team are very slim and he obviously knows that, having yet to make any kind of first team appearance this season.

Being third choice keeper at any club must be a frustrating role. Not every player is happy to Stuart Taylor their way through their career.

Mannone’s desire to go somewhere else to play is an echo of Lukasz Fabianski’s recent appeal to Arsene Wenger ahead of Euro 2012. The Polish stopper said, “I want my situation to be resolved in the nearest future because I want to play at Euro 2012. I hope Wenger will understand me and we find a solution. I want to play for Arsenal but if not, I will have to go somewhere else, even if it is on loan.”

That both of Szczesny’s understudies want to go is probably a clear indication that they know as long as he stays injury free he’s going to the Arsenal number 1 (13) for years to come.

Mannone’s departure would mean Manuel Almunia moves closer to first action unless Wenger takes the opportunity to promote one of the young keepers at the club – with Argentine Damian Martinez the most likely option.

To be honest I don’t really blame him, he’s a young lad and wants to play first team football wheresoever it may be, and being third choice even if it is at a club like ours must be a little depressing.
Hats off to him really if he doesn’t just want to sit on his hands and wants to make something of himself, if he does go, I wish him all the best.

Yeah, dont blame him also knowing a few players are ahead of him. He’s not better than Fabianski or is he? I watched a reserve game (arsenal player vid) and he made a basic error. Also hearing that Martinez is the one with the bright future, when not loan to a premeir league side and see how he gets on

I will never forget that fulham game that he won for us single-handedly. Good lad and all the best to wherever he goes (or stays)

I think that’s the problem with our fans (i include myself in that statement). We see a player have one great game and suddenly he should be given as many games as possible (a slight exaggeraton on your point but you get where i’m going). He was 3rd choice then and he’s 3rd choice now. He made mistakes prior to and after the Fulham game and it’s only his age that stopped people calling him ‘Mann-can’t-stop-the-ball-one’ or something like that…
It’s a shame it hasn’t worked out for him but we have better young ‘keepers coming though.

It would be sad to lose him as I was comfortable with him being the #3 and having the goalkeeper line-up be Chesney, Fabby, and Mannone but he is 23 and deserves some first-team action. Same with Fabianski who is 26 years old. They both need playing time. Lets not be Manchester United and treat both of them like Ben Foster and Thomas Kuzz… however you spell his last name. Both of those keepers were young and were not good enough for Man U but they still stayed and look were they are now. Thomas is still 3rd and Manure… Read more »

Ben Foster is a starting GK for a decent PL side. I don’t see what’s wrong with that. He’s more than good enough to be United’s second choice keeper.

Ben Foster is on loan at a decent club, I will give you that but coming from an Arsenal fan talking about a former Manure player I think if he left in 2007 or 08 when he was 24-25 years old. He would have been a much better player. Also Kuzz is a lost cause.

I rellay wish you didn’t go with the dropper stopper gags. It’s hard being a keeper. the constant hounding of Fabianski and Almunis on Arsenal websites do no-one any favours. Fabianski’s made his mistakes in the past but has fought his way back and we are one muscle strain away from having to rely on him or Mannone. At this level it’s a hell of a responsibility to be the second keeper sitting on the bench ready to come on if required. Constant undermining of their and our confidence doesn’t help. A jittery crowd makes for a jittery keeper.

I don’t think Fabianski is entitled to say anything after all the blunders and high profile errors he committed in his Arsenal career. Some of those mistakes directly caused
our exits from the cups. Arsene Wenger and the club stood by him then when everyone else was crucifying him. He owes us and e should not forget that. As for Mannone, everytime I see him, he’s a bunch of nervous energy. He can go too. Almunia, well by default he’s staying I guess…

Just putting that out there: Who is Reina deputy at Liverpool? Can Vito not join them. He is a very very good goal keeper and deserve opportunity.

They’ve just got Doni from Roma, so he’d still be third choice there

I have a better question. Who gives a shit who the second choice keeper at Liverpool is ?

Haha true could’ent give a bollox

it’s a long season and there are cup matches too.just be patient guys.keep pushing on SZCZ and let that guy give his 100%..if i was SZCZ i would be scared to make an error as i know there are two top dogs behind me.

Good luck Don Vito, whatever happens.
Seems to just be here at the wrong time really.
It’s funny how people were saying we were weak in the goalkeeping
department and now, with the same goalkeepers, we just don’t know what to do with them, because they’re all pretty decent. In my opinion anyway.
Plus there are at least two very able youth/reserve keepers in the ranks too.

Can’t blame the guy for wanting to play, but if you want to play you have to outplay the guy in front if you any chance you get (including practice). Last year when Arsenal’s GK situation was in complete turmoil, every GK on that Arsenal team should have done their utmost to show Wenger they deserved the job. SZCZ stepped up and proved it. If Vito wants it, he needs to shut up and step up. The season is long and there are a lot of games to be played, and anyone with two eyes and a brain knows Almunia… Read more »

i smile at articles when our backup keepers want out cause that just shows me that they see something in WS13 that is telling them WS13 is very good and they dont see themselves knocking him from between the sticks. a keeper for many years to come. being his only 21.

Maybe they should try to learn to play Full Back. Arsene Wenger loves to re-invent players in new positions. Let him try with Vito and Fab. I mean, if they make the bench and Chesney doesn’t get injured they still have a chance to play if they can double at full back.

Another thing Wenger could do is let them get some time on the pitch by substituting Chesney whenever we get ahead by 3 or 4 clear goals and have 25 minutes left. They’d become some of RVPs loudest fans cheering him on to “score another one”.

we have plenty of back up goalkeepers so 1 or 2 leaving aint a problem.