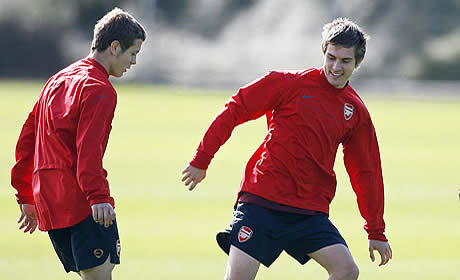 Arsene Wenger has revealed that the development of a pre-season partnership between Aaron Ramsey and Jack Wilshere played its part in the decision to allow Samir Nasri to leave the Emirates in August.

Having started the summer adamant that neither the Frenchman nor club captain Cesc Fabregas would quit N5, the boss gradually saw his hand forced by player stubbornness and, in the case of Nasri, an offer which was too good to refuse for a player in the last year of his contract.

Reflecting on the summer’s events, Wenger confirmed that he had been left seriously short of options once the extent of Jack Wilshere’s injury was confirmed and subsequently reacted by snapping up Mikel Arteta and Yossi Benayoun.

“You want to keep your young players but when we didn’t reach an agreement over a new contract I prepared myself to face it [the prospect of Nasri leaving],” Wenger told Arsenal Player.

“Overall I knew that Ramsey didn’t play much last year and that he would be in contention if he had a chance not to be injured. In pre-season I felt that Wilshere and Ramsey worked very well together.

“What we did not expect of course was to lose Wilshere on top on that. We had to admit then that we were a little bit exposed quality and number-wise.”

One player who was seemingly scouted by Wenger as he looked tomake up the numbers of his squad was Owen Hargreaves. The former Bayern Munich and Manchester United midfielder left Old Trafford at the end of his contract in the summer after two years sidelined with injury.

A decent player on his day, it appears Arsenal were tempted by a cheeky bid, but figured when it came to ridiculously injury-ravaged central midfielders we had probably had our fill. It’s not as if Ramsey, Wilshere, Diaby, Rosicky haven’t at one time or other spent at least eight months sidelined at a time.

“When he played at Bayern Munich we followed him very closely but it was big transfer – I think he was sold to Manchester United for £17 million at the time and he only had one year left on his contract. So we didn’t move in for him at that time,” Wenger told the Mirror.

“In the summer, you consider it but we had players like Frimpong and Coquelin coming back – Song and Diaby in these defensive positions where we were not really in the need.”

Every time I try to think of the bright side, I will always remember that Ramsey and Wilshere will become the much too bright future of Arsenal’s midfield, and I always forget they’re not even 22 yet, and Walcott’s just 22.

Agreed. And both want to play for The Arse. Jack’s a Gooner through and through, and Rambo chose us despite being courted by Sir Drunkalot.

Nasri and Cesc chose not to play for the Arse, so bye then.

But a little bit worried to count in Theo for the future just yet. He has to extend his contract first.. 🙁

He will do so, thats for certain

I’m not worried one bit. When its time, we’ll find out. What’s the gain, for eg, if I worry from now till the end of the season and then, he signs.

The more I see of Nasri, the happier I am he’s gone. WE made HIM look good, not the other way round.

So I say fuck you very much Citeh…and the fact that he’ll be gracing the Carling Cup against our fringe players should say it all for the deluded greedy little cunt.

If he even gets his game, that is.

Arse fans; Why all this fixation with Nasri?
He won’t be playing tonight. Neither will Clichy, you will however probably have Kolo to boo, seeing that slagging off ex gunners are your main focus..
Your behavior towards Adebayor stands out as the most discusting in world football.

No fan would boo kolo, he went cause wenger believed he was past hist peak and got ALOT of money for him. He will probably get som cheers actually..

And the worst behaviour ever? Did we throw a pighead at him when he took a corner or what did I miss? Ade was abused only by some chants and only after he hade gone over a year insulting Arsenal-fans in many many ways.

So the main idea is: when the club decide to get you at of the club, by not proposing to Piers for example a two years contract well deserve but only one year, or when Arsene thinks the player’s best is behind him, it’s okay. But when a player, doesn’t go on strike but just say, “I don’t want to renew my contract, I will play if you ask me, but no renew it” it’s a problem? Come on, let’s be fair about it. The club and the players make an agreement that we call contract. Nothing wrong for me.… Read more »

What about Spuds reaction to Wenger? Thats NOT disgusting?

Worse than Man U singing disgusting insults to AW for 15 years?

Players that leave are giving their all in service for the club don’t get booed. Those that go for the blank cheque each week are money-grabbing mercenaries who think they are better than the club.
Adebayor played well for one season, got a bigger contract and then didn’t try. Man City came along, offered Arsenal a good sum and the player a massive contract to which he said, yes please.
Could you see Adams, Keown, Parlour, etc… Doing that? I doubt it. I can’t see good ol’ Jack doing it either in terms of a modern player.

red or dead
Reply to  Gaxe

fuck off gaxe you prick.

ps: nasri is a cunt.

your comment is ‘discusting’ troll, why are you commenting on an arsenal blog anyway? you’re obviously not a fan since every arsenal fan knows that no arsenal fan would ever boo toure and adebayor more then deserves any abuse he gets…so why don’t you take your ignorance elsewhere

Whereas Adebayor’s behaviour towards us fans, our team, and his former team-mates, was…what? exemplary? Running the length of the pitch to celebrate, stamping on prone ex colleagues, pimping himself out every summer?

Fuck Adebayor. See where he is now, begged out by the shite up the road, and with most of his wages paid by fucking eejits that know no better? That’s where that graceless fuck belongs.

Happily, his greed will leave the Spuds high and dry too. What is it that’s ‘best served cold’ again?

I always thought the real reason why Nasri left was because he was a lesbian faced little cunt.
And Gaxe, fuck off you prick, its actually pathetic that supporters of other teams come on here and ‘try’ to mug us off – Adebayors a cunt and got the abuse he deserved.

I know it’s not the point but in all seriousness, Nasri left in great part because he was a coward, he didn’t believe that this Arsenal side with him in it could compete with Citeh so he took the cash to be a bit-part player and win trophies in comfort rather than take on a challenge.

we got ox coming, coq, (maybe frimpong, with a bit more matured person). even alex song is only 24. bright future indeed. just hope that everyone is like captain jack, who claimed would play for gunner for life.

All in all Arsene made the right choice of letting prick move over to city and milk them dry coz all things have an end don’t they? Am sorry for hating Wenger when everything was tumbling down in the Emirates then. Guns for life COYG!!!

I didn’t care to see Nasri go at all. He had a decent half-season, and then when the going got tough he just disappeared and was on the pitch in name only.

Instead of him, we now have guys like Ramsey and Wilshere who give 100% in every game.

Within five years we’ll have forgotten that Nasri ever played for us.

I have to say all the slagging off of ex-players (deserved or not) is getting so tiresome. We just look like a bunch of spoilt bitter whingers to other teams. Save all your hot air and get behind your team and support them positively. Who gives a toss about Nasri, he’s gone and not worth my time. I’m going tonight and will be aplauding Gael and Kolo and then pretending I don’t notice Nasri when he walks into the room with his new boyfriend.