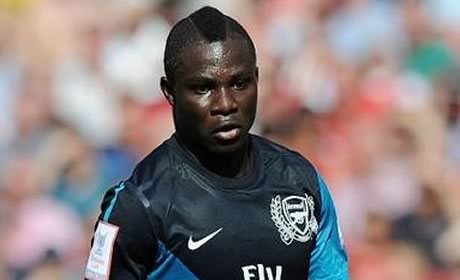 Arsene Wenger hinted that Emmanuel Frimpong may go out on loan as he believes the midfielder needs competitive games to develop further as a player.

Speaking at his pre-game press conference in Greece this evening Wenger praised Frimpong’s combative qualities and suggested the game against Olympiacos was a chance for him to show what he can do.

“He is a guy you know you can go to war with him, he has a real winner attitude,” he said. “Now for him it is to take the final step and get a regular place in the Arsenal team.

“He was massively impressive before he got injured, because he had been outstanding in pre-season. He struggled to come back and feels he is not completely back to his best, but I think he is – what Manu needs now are competitive games.”

Whether that means at Arsenal or on loan, as was mooted last week, remains to be seen, but the Ghanaian may find his chances of competitive football increased with a temporary move in the new year.

And Frimpong admitted he had moments of self-doubt when recovering from the cruciate knee ligament injury he picked during the summer of 2010.

“I knew I would come back to playing football, but felt I was never going to get my chance at Arsenal again”, he explained.

“When I had my chance, everything was going well. I thought that when I came back, we would have all the other players fit again.

“But in football you cannot predict anything, and I have just carried on from where I left off, and have that chance again. Now I have to keep playing well to force the issue of playing in the team.”

And the famous Greek atmosphere won’t faze Frimpong one bit.

“When you are a professional footballer, you want to play in those kind of stadiums and environments. Tomorrow is going to be a test of character, not only for me but for others and we have to deal with it.”

certainly one that will “die” for the Arsenal…. i hope

The anticipated loan move to Molineux stadium won’t do Frimmers any harm, hope it goes through. I wondered if Arsene would maybe send him to a team that plays decent football like Swansea to hone that side of his game but the rough and direct game employed by the Wolves may actually work to his advantage and help him adapt better. He’s physically ready for the premier league but once he’s there mentally, I think we’ve got a Colossus on our hands. What’s more, a Colossus with a burning desire to do good by the Arsenal and one that hates… Read more »

Benayoun is shit, he doesn’t deserve to play for afc

Benayoun is a true gunner already. He knows he was treated like shit with Liverpool and Chelsea (mainly Chelsea) and is now being treated as a player at Arsenal. He even tweeted after the Chelsea-Arsenal match that he was proud of us and that this was a great win. So ya he knows Arsenal is the better place

he’s not playing very well at the moment, but he hasn’t had the games, which is what he needs. by all accounts he has a really positive effect on the squad. Maybe he’ll go back to Chelsea in the summer but not before having a really important job to do at the Arsenal.
Personally, i like the guy. I think he’s a good influence.

I know Wolves are mooted, but are they the side we want him at? Premier League is definatley preferable, could he get a better footballing education elsewhere though.

Somewhere like Swansea or Norwich, an would get into the Wolves side?

If Frimpong can make the difference, I’d like to see ’em hang around in the Premiership. Hearing Colin Murray say “Wolves” on MOTD 2 cracks me up every time……

I’m not updated with how Wolves are, but does anyone know who his competition would be there? Do you guys see him getting decent minutes? One thing I don’t like is that cunt Karl Henry. Hopefully Frimmers can kick him around in practice.

You asked: “but does anyone know who his competition would be there?”
My answer: Nobody

My favorite club for Frimpong is Wigan. They need someone like him badly. Martinez has gud soccer technique. It’ll just be like playing for under Arsene away 4m Emirate. I hope Ryo too go on loan in England possibly to Wigan too.

Wigan are the crappiest team in the league right now. I’d be much happier to see him go to Wolves than Wigan.

Strangely enough, it’s when players go to the crap teams that they try and change that teams fortunes and we see what sort of player they are. Going to Wigan and dragging them up through the ranks would be better than helping a team stay in a mediocre mid-table position.

Wigan need a fighter. and Martinez will be better manager.
We don’t need Mick McCarthy telling Frimpers how to fight.
Frimpong will make a bigger difference at Wigan with like minded players than he will at a team that plays desperate football like Wolves

Wolves isn’t a bad choice for Frimpong. Contrary to believe, Wolves do try to play with the ball when they attack. They just lack the final “edge” to finish it off. Like Arsenal of this season they play predominantly through wing with Jarvis and Hunt. He won’t get much competition in the “DM” role as Wolves only have recently fit again Guedioura and Karl Henry in that role. Wolves might not be technically excellent but they have plenty of heart to make up for it and I feel Frimpong will thrive well in that environment. I would think that Bolton… Read more »

Heh. I got no problem with Mick McCartey or Owen Coyle. Mick looks like Ted Danson and Owen Coyle like George Clooney’s uglier, chinless and cap toothed brother. These men would welcome Frimpong like a fat kid welcomes cake.

At any rate, I think you can do a lot worse than play alongside Stephen Hunt (though Petr Chech will disagree).

I’d rather think that Frimpong would prefer to play alongside Mike Hunt.

Burt from Burt and Ernie, oh my goodness that is priceless. Mate you’ve just set me off into a fit of laughing, just thinking of that tuft of hair on his head, I can’t even remember now what I was going to post before. Excellent. 😀

Hmm, that previous post is in the wrong place, definately supposed to be a reply to Merlins Panini post.

Mccarthy looks more like Wallace from Wallace and gromit….

looks more like Burt from Burt and Ernie to me.

I think we should let Bolton give him a go. Worked for Jack, and I think Coyle tries to play football, so it would be a decent further education for the Frimster.
Perhaps Everton might be an option? They’re skint and need someone like him too, I reckon.

All said and done, a relegation battle(that, let’s face it, Wolves will probably be in the thick of come next year) will certainly benefit him, he’ll end up playing in a lot of intense games and hopefully it’ll inculcate a real must-not-drop-points attitude in him.

It may be worth noting that Wolves play Chelsea, Liverpool, Man Utd, Man City and Newcastle at home in January and Sp*rs from January onwards. Frimmers may be able to do us some favours on loan – even if its just Frimponging a couple players on the run in to the chase for CL places.

That’s a great idea. Go injure players on our competitors while not in Arsenal colors. Or at least give them the Nasri treatment. When Wegner’s asked about it, he can shrug his shoulders and blame it on Wolves.

Just give the lad a good team to learn from!

Somehow I doubt that Wolves are that team.

I don’t think Steve Kean is the right manager for him….

Frimpong will be a massive star in the future. Just like Wilshire, a loan deal at a decent mid-table side will do him a world of good.

What cunt has thumbed me down? Fuck off you wanker!

best place for SZCZCZCZCZC to learn was the first team, same for CJ, don’t see why not for Frimmers either to be honest. We’d all be pretty fucked off if Song picked up an injury and Frimpong was stuck at Molyneux, even if he was kicking Karl Henry in the head every morning at training.