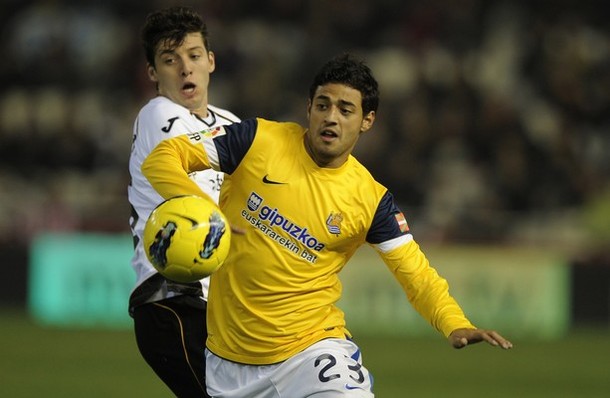 After an impressive season on loan at Real Sociedad it appears that Carlos Vela has done himself no harm in the hunt for a permanent move away from the Emirates.

While a deal at Sociedad appears unlikely, due to his wage demands, agent Eduardo Hernandez made clear that he had been approached by several other ‘important’ sides.

“We are in talks,” he told press in Mexico. “There are several clubs interested in him because he had an exceptional year. All the clubs are important, because Carlos has shown the talent and strength he has.”

Still under contract at Arsenal, Hernandez also hinted that a return to the Emirates was possible, although that decision lay firmly in the hands of the boss.

“Back to Arsenal could be an option, but I do not know if it’s ideal. [Arsenal] are one of the biggest clubs in the world, but Carlos wants to play. The decision will be made by Arsene Wenger.”

“Any player needs playing time to show what he has and to get into a rhythm, he participated a lot [at Sociedad] and these are the results.”

Having been called-up by Mexico to represent his country at the Olympics, Hernandez also confirmed his client had turned down the opportunity to focus on finding a new club.

“(London 2012) is an important showcase, a championship broadcast worldwide, but what he did in Spain was impressive. He took the decision (not to go) and spoke with the people on the national team.”

Cheers to @SiuFay for the heads up again.

still somewhat disappointed he couldn’t find his feet at our club oh well, on to joel campbell then! Whats the word on him? I hear he’s eager to make an impression at arsenal…just hope its a good one!

Good news. It’s a shame he never made it here but glad to hear several clubs are in for him. The last thing we need is a repeat of last summer where we can’t sell our fringe players.

he will fetch 10 million pounds atleast !!

He is a quality player but sadly he just never adapted to the EPL. Hopefully his future can be sorted quickly and he can play regular football.

He looked pretty comfortable in the carling cup, the competition he actually played in. He never adapted fully to the 4-3-3 formation at arsenal, but to be frank, he was never given the chance to. I’m sure he will leave now, and it’s good he managed to salvage some credibility at Sociedad. Good luck to him.

I used to think it was the system and he’d be better in a 4-4-2 – I remember him looking a real star alongside Eduardo – but it cant have been as he played on the left in a 4-3-3 at Sociedad and, once he’d recovered his confidence, he emerged as La Liga’s fourth highest scorer in the second half of the season, bettered only by the predictable three at Barca/Real. In an interview in Spain he said he hated the training with us – don’t know why: he didn’t go into details – so it’s no suprise he didn’t… Read more »

@miranda – don’t forget he spent 2 years at arsenal when we were playing the 4-3-3 formation and I thought that he did actually improve dramatically as a left winger on the odd occasion when he did get a chance (usually in a cup). So I think it was partly a question of taking time to adapt to the position, and, as you said, he did improve during his time at sociedad, because he regained confidence, or because he adapted to the position or the way the team played. Not sure exactly which – probably a combination. Also I don’t… Read more »

I really liked the way he finishes, that’s a sweet left foot he has.
He could have been a fox-in-the-box types, but I guess he was never cut for the EPL. Of all the players listed for the “Exodus”, he is the most talented one, imo. But he hasn’t been missed when he is not in the squad, and with Campbell and Afobe coming through, the loss won’t be great.
Would hate it if he makes it big somewhere else though :s

Gonna miss Mr Nothing but Chips and Lobs.

Best finisher and best close control at arsenal aside from RVP and 2nd to Walcott in pace. He could have taken Arshavin’s place in the squad 2 years ago, and certainly wouldn’t have done any worse (he consistently scored and assisted when playing for arsenal, MUCH better than 1 in 3 if you consider the minutes he played). I’ve no doubt he would have grown into the role over the course of a season of 1st team football.

I taught he could have been a similar player to reyes but better. Oh well, I wish him well. Check this link: pcstorage.org, you’ll like what it has to say.

Hurry up and leave Mt average. Thanks

Of the 4 “reserve” strikers i would put him 4th in the queue for the taxi. behind park chamakh and bendtner. he never settled into the formations we were playing yet he has this year settled into a 433 which is what i am sure we will be playing next season. However, we all need to stop talking about rvp walcott bendtner mvila giroud etc. they are all at the euros and will not be making moves till after

Davi
Reply to  bc

Why does park need to go? He’s another who probably just needs a chance. I think there’s something going on behind the scenes, but as I don’t know, I can only judge on his performances and he looks extremely talented, but not fully adapted to our system yet.

I think he’s a really talented player who would do really well in our side if given an extended run. At Sociedad he started slowly but by the time he’d adapted, he was absolutely brilliant. Unfortunately, I don’t think we can afford to go though the 10-20 games it might take for him to get in form, so it might be best to sell for a good fee while he’s doing extremely well.

Sad to see you go Vela. Think you can class yourself with Mannone as people the boss never believed in, sure he must have his reasons. Think you would have been perfect for 442 as you played your best game, IMO, while partnering Eduardo in an FA cup match in which you also scored a blinder. One player that we may end up regreting that we sold. But that’s how life is. You miss some and gain some.

Right now, I think it’s a toss between him & Arshavin as to who stays. Personally, I would keep him at the club. Saw a few Sociedad games(they show virtually all Barca,Real matches here and just a few others) he looks bright and surprisingly looks hungry for the ball. He seems a little buff up now as well which could come in handy back in the EPL. Still only 23, he looks like maturing nicely. Looks better both in his technique and calmness in finishing shots off and his versatility/mobility to play across the front line(LW,AMC,RW) than “world’s greatest striker”… Read more »

He has always scored goals where ever he has gone but it does become a bit difficult to be consistent if a player only gets 3-10 minutes to show what he has to offer. And when he did get to start games he usually had a midfield short of players with a real eye for a goal scoring pass when Vela would make so many runs and not be seen by say Ramsey and one can only say if that were Cesc he would have been fed along time ago. This was made apparent in the 2010/2011 season when Vela… Read more »

We should sell this guy and use the profit to buy Joey Barton.

he was probably a good striker but nothing compared to me, greatest striker to have graced football

hey bendy..he was better than me, If he comes to city, i’ll shit in my pants, because ill be forever on the bench (dench)

Sorry to go off topic but I just read a comment on Le-grove by a so called Arsenal fan (incesc) who called RVP van rapist is it just me who thinks that Le grove is full of spurs fans pretending to be Arsenal fans or cunts of Arsenal fans. No one pulled the prick up over it when I tried the site would not show my comment the site is run by cowards or it will not show any comment that they don’t agree with.

We can definitely get 7m and insert a sell on clause too. He is a good player, just not for the EPL.

The comments here show why England needs some sort of truly competetive reserve team competition for squad players to play games in regularly so that they are sharp when called on to play in the first team. Our squad players don’t currently get enough competition to play themselves into some form. Perhaps this is something where the Spanish have the edge on us (though I don’t think their model of second teams would work in England), Perhaps taking a leaf from Rugby League in Australia might be an idea (Not sure if this happens elsewhere). The Premier Reserve League matches… Read more »

Plus, show the highlights of the Reserve match on the big screens in the stadium prior to the main match. If we’ve won we give the crowd a boost. If we’ve lost we give the crowd a reason to cheer for the first team to get revenge for their little brothers. Also, if Sky showed the brief highlights of the reserve match it would raise the profiles of the featured reserve players a bit while also giving us a 5 minute break from the God-Awful pundits they force on us if we’re watching on TV. Wouldn’t you rather see Vela… Read more »

There is a reserve league.

And if there was as much interest in watching the reserves as there was the 1st XI, then they wouldn’t be reserves, would they?

[…] the agent of Carlos Vela told the press in Mexico that some big clubs are sniffing around El Chipador: We are in talks. There are several clubs interested in him because he had an exceptional year. All […]

Too lightweight for the PL but at least he has put a shift in by going on loan and will make it easier for us to sell. I just hope Joel Campbell/Ryo don’t turn out to be the same!

Why haven’t we gone after hazard. We are so poor in the transfer market, its the only thing that frustrates me about wenger

I am sure you guys probably know this already. Looks like another that got away. http://www.guardian.co.uk/football/2012/may/28/chelsea-eden-hazard-lille

Were we ever seriously interested in him? Seem like we were rumoured to be for the longest time.

We could never afford Hazard but Kagawa is more affordable. However, I can’t see Wenger agreeing to pay 20 mill for a player with one year left on their contract