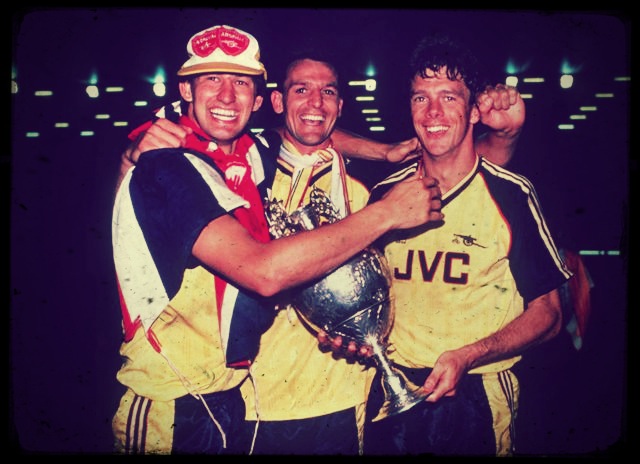 Having seen his side keep clean sheets in their opening three games, Arsene Wenger has commended Steve Bould for his work with the Arsenal defence.

Replacing Pat Rice as the club’s assistant manager this summer, the former Youth team coach has been widely praised by members of the first team for his tactical input on the training ground, but appears to have also impressed the boss.

Speaking about his new number two at a UEFA convention in Nyon, Arsene Wenger reflected:

“We have played two teams who didn’t really attack, but he [Bould] is doing a good job.

“We continue our training regime. He has taken over from Pat Rice for the defensive job where he is doing very well.

“Will we finish with the best defence in the league? I hope so.”

As has been well documented, Bould was mentored by disciplinarian George Graham after signing from Stoke in 1988 and went on to become an integral member of the famed back four which provided a rock-solid basis for three title winning sides in the eighties and nineties.

Arseblog News echoes Arsene’s warm words and trusts that Bould’s winning attitude continues to rub off on the youngsters…or something less innuendo-tastic.

Cheers to @RYO_Cleverfish for the heads up.

If jamie redknapp agrees that our defense is finally something then surely there must be something we’re doing right. (Though we don’t care what the twat says anyways).

I agree, if Jamie Jedknapp can see it, it must be true.

For Jamie Redknapp to see anything it has to be so fucking obvious, everyone has seen it sa long time ago.
It real is the seal of approval we have all been waiting for !

It really is the seal of approval we have all been waiting for !

more importantly, if Gary Neville thinks our defense is alright then it must be!

as much as i disliked him as a player, he is brilliant in his analysis.

I think it’s not only because of Bould we concede less goals. It’s because we have a outstanding squad at the moment. The players work very hard and they are mentally stronger than previous seasons.

Podolski and Chamberlain who work very hard to defence. I have never saw Arshavin or Walcott do that. We had always a good attacking line now with the influence of Bould and a better work ethic from the players defence is starting looking really good.

I feel we had a decent work ethic in the team last season too but the tendency to get caught out by 2 guys breaking against 4 players we had back was far too prevalent to be purely down to a lack of team work. I agree that we’re tighter because our defence is playing better AND our team is working hard but mostly down to the work with the defence than the rest of the team.

And it speaks wonders that Koscielny hasnt even played a game yet, who in my opinion, is our best defender.

The thought I always kept having over the last few seasons is that: if we would just sort it out and stop conceding comical first-shot-on-target-goals then we’d actually get a lot more wins, which could very well be the crucial difference between challenging for the title or being an also-ran in the top 4, and this more so than any signings we could possibly make.
Here’s hoping that the new found defensive attitude will be strong throughout the season throughout the various line-ups we’ll have and so maybe, just MAYBE we can win some trophies this year.

I wouldn’t change the start we’ve had for the world (apart from 3/3 wins) Slowly but surely we’re building something special. It makes me so happy and is a real throwback to days of Adams, Bould, Winterburn and Dixon. It’s good to see Bould’s assistance paying dividends.

If we’re the only club in england with 0 conceded so far then the Bould assistant manager is obviously doing something beautiful alright.
He’s got no hair and we don’t care.

I saw the straight line at the back and it really made me think . . . hmmm, not seen that for a while, Bould is clearly making an impact.

I hadn’t seen the line that together and organised for so long, it was really refreshing to witness, that’s when I thought, do you know what ? I think we can surprise a few people this season.

I saw the same. At one moment when L’Pool were off side the back line were straight as a straight thing and arms raised in the air. Very reminiscent of the old days. Only worry I have in defense is cover of the LB/RB positions in case of injury. Maybe all is ok but after last year not having any at all available I wish we had a bit more solid cover there.

There Seems to a a different ethic about the whole team,all seem to be playing for each other without any prima donnas as in the past.When we went in front at Anfield I didnt feel that we were always likely to concede a goal as we have in the past .It seems that there is a bit of George Grahams old arsenal stubborness in this group. Start to score a few more goals and this side could really go places ,especially when we have Jack and Sagna back in the fold.Starting to think we are looking good again

Alright I’m going to be the first to say it. Has noone thought that our clean sheets might just be coincidence? We have played 2 teams who just sat back and one team so poor their best player is a 17 year old with 2 apps. The mood of the comments change week after week, when we eventually lose everyone will revert back to the “our defence is shit” lines of the last few seasons, it’s funny seeing some of the same people who months ago were calling mertesacker and Gibbs aweful are now singing their praises I’m going to… Read more »

Mr Bould has caused my heart to work less weekend mornings, as compared to the cardiac panic everytime the defense and Almunia had to coordinate for a lob in from the opponents. If nothing else, I thank him for my health.

Gotta be the same for Arsene too. I’m thinking of him burying his face in Pat Rice’s lap during the WBA match in May.

Please talk to Sagna and then please say something public which we don’t have to read between the lines.

seeing the little boy inside Judas messing with sagna, I wouldn’t want it near our defense

Can I be the first to call you a moron?

sagna is gone.deal with that first.I’m counting you will be the first to call him a CUNT

Okay we get it you’re a cunt, stop trying to overemphasise it!.

” The bould doing beautifully”
” The bold and the beautiful”

Don’t be doing that.

How do you know Asians robbed your
house? Your cat’s gone and your
homework’s done.

I don’t mean to be fatgooner 2.0, but I don’t think our defence has really been tested. Yes we have definitely improved both in defence and defending as a team but I think that improvement is being overstated. Just like wenger pointed out, stoke and sunderland came to defend n rarely tested our defence and liverpool actually created chances, a more ruthless team (with non-racist players) might have converted one or two. Am I happy with the defence? Definitely yes, but I think we’re over-hyping its improvement without sufficient data. That being said, I hope we can get through chelsea… Read more »

Deschamps has speak out that Giroud will not play tomorrow on France squad against Finland because he is injured.. wtf..

He sprained his wrist when he swung the banjo but missed the cows arse !!
calm down everyone*****its just a joke*****

This time he must have clipped his balls while shaving.

Yes, it’s great Bouldy is doing well. But he has been on the coaching staff in some capacity for years….why didn’t Wenger bring him in to help the defence ages ago when it was sooooo obvious we couldn’t defend to save our lives.
The fans were calling for this appointment years before it happened…..if we could see it, why not Wenger?! Lousy management.

Wenger saw a fuckload of things that fans didn’t see either.

Whist I’m obv happy with the first 3 games and the team ethic it’ll be interesting to see how we cope when we do concede, especially if we go behind. I’ve always supported Wenger but you have to wonder if he’s thinking he should have promoted Bould years ago! Wenger was told seasons ago but he refused. Also, where did the ‘famous back four’ tactics go? Pat rice was around then wasn’t he?

People are giving Bould a lot of credit (players included), and probably rightly so, but right now he’s not missing four starters. And he didn’t start the season with a surprising Newcastle (a game in which cunty Joey Barton got Gervinho sent off), matches against Udinese and at Manchester United without enough first team players.

id giroue can score a few we have a chance but basically defence or no defence we have one proper striker if lucas is really a play maker from the left who can chip in, abd that is not good enough.. i like the look of our squad so much this year just hope the french lad can get his shooting boots on soon. my friend in france has assured me he is top quality so fingers crossed.

Thank you @AAllen sport for your posts throughout the day, Arseblog?, not so much. Appreciated.

I’m loving the improvement but I just wish Wenger would get over his stubbornness at times, it was obvious for all to see the defence needed work, with a new coach, and when someone would mention it to him he’d get so pissed off. I guess he was just into those transitions eyeglasses. God it would be painful at times to watch him ripping into poor old Pat, who just had to sit there and take it.

Ye @AAllen, I got to say after a long day at work dominated by a hangover and a lack of sleep due to an impromptu Wednesday night piss- up, logging on and seeing those 3 beaming faces and that trophy in that photo brought back great memories. But when you think of it, if we could only stay in the hunt this season, keep clean sheets, players fit, get the rub of the green we never usually get and win the league, I think personally the victory would surpass any title previously won in my lifetime, Anfield included, and that’s… Read more »

Just drink a fuck load of water. It’ll clear you right up.

Just go back on the drink you’ll feel even better

Gibbs showed a great deal of improvement this season, let’s hope he will last a season now.