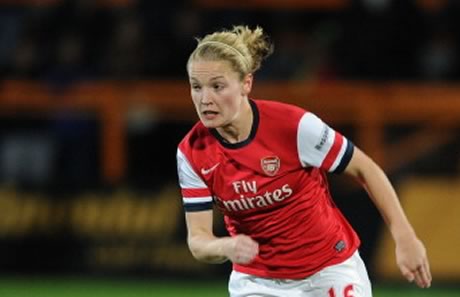 Arsenal Ladies finished 2012 in fine fettle domestically. They cruised to their 9th successive league title with an unbeaten season in the WSL and also bagged the Continental Cup. They now bring the curtain down on 2012 with a Champions League double header against German behemoths Potsdam Turbine, with the first leg taking place at Borehamwood this Thursday.

Tim Stillman spoke with 2012’s WSL top scorer and Arsenal midfield lynchpin Kim Little about the game with Potsdam, her impressions of the domestic season and how she became one of Britain’s most renowned players.

I did manage to score some goals and create some too, which are the main points of my game. But I still think I can be more consistent over a whole 90 minutes. Maybe I over exaggerated when I said “average”, I don’t think I had a bad season by any means. But I know I can play a lot better and I set very high standards for myself. I can be more consistent than I was.

Vic Akers and Laura Harvey have both been moved to refer to you as “world class”, which is quite a statement given that you’re still only 22. Which areas of your game are you looking to improve upon?

My consistency definitely, I need to be able to perform at the highest level for an entire 90 minutes and I’m not quite there yet. I want to score in every single game because scoring and creating goals is what I do. If I don’t score, I’m always disappointed. I don’t have a particular area or aspect technically that I want to work on because I need to work on everything. I have to improve on all aspects of my game, especially in midfield where you need a lot of different qualities.

You’ve said in the past that Zinedine Zidane was your greatest inspiration growing up. Do you have a particular female footballer that inspired you when you were younger?

It was difficult to pinpoint a female footballer for inspiration when I was younger. There really wasn’t much women’s football on television so I wasn’t as aware of the women’s game. I was a big fan of the men’s game and used to watch every game I could on the television and Zidane was just the ultimate player.

But Julie Fleeting is a big heroine in Scotland and when I came to Arsenal I was really delighted to be able to get the chance to play and train with her. I’ve learned a lot from Julie because she’s a phenomenal footballer. But it was certainly Zidane for me when I was a kid.

A lot of the girls in the squad are passionate about the teams they support. Ellie White is a big West Ham fan, Gilly Flaherty supports Millwall. Kelly Smith grew up an Arsenal fan and Steph Houghton and Jordan Nobbs are Sunderland fanatics. Who did you support growing up?

I grew up in the North of Scotland, so Aberdeen were my team. But I can’t say I was a fanatic. Certainly not in the way that Steph and Jordan are about Sunderland. I was just a really big football lover, but Aberdeen were the team I looked for.

How did you get into playing football as a child?

I can’t really pinpoint any particular moment or reason. I used to really enjoy playing with my Dad and my older brother in the garden at home, so I started playing at school. I got selected for a few boys’ teams and it just took off from there. The more I played, the more I loved it and the better I got. I started playing a lot of 5 a side and 7 a side and it just progressed from there.

Kim, you were one of the few Scottish footballers to publicly put yourself forward for selection for TeamGB for the summer Olympics, despite the fact that the Scottish F.A. had concerns over TeamGB. A few Scottish and Welsh players declared themselves unavailable so as not to offend their national F.A.’s. It was a controversial decision and one that generated a lot of discussion. Was it a hard decision to make?

Obviously I had to think about it. I’m a proud Scot, but I’m British too. It was an immense opportunity for me to go and play the game at the highest level and I just couldn’t turn it down. I’m glad I did too because it was such a great experience and I think it made me a better player too.

Looking ahead to Thursday, Arsenal face Potsdam in the Champions League and will find themselves in the unusual position as underdogs. How will the girls cope with that very different pressure?

They’re an excellent side and they’ve won the Champions League twice in the last few years and been runners up a couple of times recently too, so we know what we’re in for. It’s going to be the stiffest test we’ve faced this early in the competition, that’s for sure.

We’re used to concentrating on our own game to get results, but we’ll have to do a little more research on them and be very aware of their strengths. We’ll be cautious of their skills and ability of course, but we need to impress ourselves on the game because we have quality players that can hurt them.

Who would you say are Potsdam’s players to watch?

They have a Scottish forward named Lisa Evans who I’m familiar with from the international set up. She’s only 20 but she’s a very dangerous player. She’s a forward and she’s very quick and direct and likes to get at defences. She has a lot of pace and we’ll have an eye on her for sure.

After the Potsdam games of course, Arsenal Ladies go into hibernation until the spring when the domestic season starts again. Last summer the girls did a post season tour of Japan. Are there any similar plans this autumn?

Not as far as I know, we certainly haven’t been told of any plans like that. We’ll get a few months off after the Potsdam games, with no games and no training. We’ll get a complete break from football and then resume pre season training in around January ready to go again next season.

Finally Kim, the F.A. recently launched a 5 year plan for women’s football relating to television and commercial coverage and introducing a second tier to the WSL in 2014. What are your reactions?

It’s definitely a move in the right direction. We know we have to take things slowly and build and I think this plan really looks like it will build on good work that has already taken place in the last two years. The formation of the WSL has already really pushed things forward in terms of coverage and exposure.

The Olympics has put the spotlight on the women’s game as well and it’s important we capitalise on that. In terms of the WSL, a second tier means that relegation and promotion will be reintroduced and that will be really big and push the quality of the women’s game even further.

Thanks very much to Kim for her time. Arsenal play the first leg of their Champions League encounter with Potsdam Turbine this Thursday, 1st November at Borehamwood’s Meadow Park. Kick-off is 2pm. Tickets are £5 for adults and if you’re wondering what to do with the kids this half term, tickets are free for U-16s.

Fab interview. Kim is a fantastic footballer – reminds me of Nasri. But with class.

What has Lil Kim got to do with Arsen– oh.

Anyway, congrats to the Lady Invincibles.

No cunts please. Oh, look at that. Too late.

Blogs, how can i do multiple thumbsdown???

DO ME A FAVOUR LOVE (Sorry)

Great interview, and many congrats ladies!

Make it a treble for Arsenal, Kim.

It’s amazing how “little” I give a fuck about WSL.

And I also bet Le coq would fit right in into the Arsenal ladies team. Right in!

It’s probably quite amazing how “little” your “coq” actually is too.

Shut up, You little duck.

Take that you cunts who say that Arsenal hasn’t won anything.
Come on Lady Gunners, make it a treble.

Good to see that gunners are winning silverware somewhere.

Im suprised Gazidis and Kroenke didnt bring this up at the AGM.

I know we like to knock gazidis abit but he actually mentioned it in the early part of his speech at the AGM.

Dang Arsenal drawing Potsdam in the Champions League Round of 16 is like Celtic drawing Rangers in the Scottish Cup Round of 16.