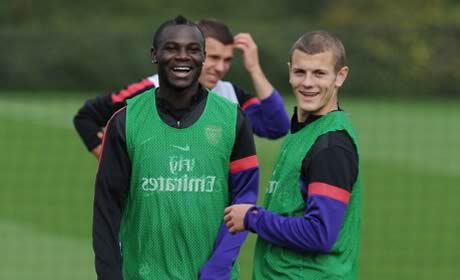 After declaring for the country of his birth, Emmanuel Frimpong’s introduction to international football is being held up by FIFA red tape (and his unavailablity due to injury of course).

Because he’s represented England at under-age level, special dispensation is required from the game’s governing body, similar to what England will require if they call up Carl Jenkinson.

The head of the Ghanaian FA, Kwasi Nyantakyi, told local radio, “The matter is still with FIFA due to some documentation they need from the other football associations in the UK.”

“This piece of documentation has dragged the issue but we are hopeful before the end of the year the issue will be resolved to give him the chance to come and play in the Nations Cup if the coach so wishes.”

Of course much will depend on Frimpong getting regular football and with the Arsenal midfield a highly competitive and high quality place, he may well need to go out on loan again.

There have been suggestions he could go back to Wolves, where he was due to spend a season until damaging his cruciate ligament, and after a number of reserve fixtures he could, along with Jack Wilshere, make a first team return in the Capital One Cup at the end of the month.

I’m happy with this, he’s not getting into the arsenal line up anytime soon so it will be good to get some minutes for his country

can we send him to prem team.Pretty sure he’s be a good fit at Southampton.

Alternatively,
a young man who has already missed almost 2 seasons of development with serious injuries which we, the Arsenal supporters, have paid for might want to think about paying us back a little and spending some time at the club developing his skills as opposed to sitting on the bench somewhere in Africa during January/February.

After that much of a lay off there’s always that blood rush to get back on the pitch and get on with things. Much like wilshere wants to play really bad right now. That’s what going thru frimmers’ head at the mom “i need game time”. Anyway I wish him all the best in the Afcon, it’s just one of those unavoidable fingers crossed situation.

This will be the only time FIFA will get their pathetic arses in gear, and issue the paperwork, so he can go to the ANC, rather than stay and get his career back on track here.

Ghana starting xi is just about to get frimponged!!!!!……in a good way.

That word ‘frimpong’ is as versatile as the ox!

Would like to see him at a team like Southampton (same goes for other loanees) One of the great things about English football now is that there are a lot of teams trying to play “proper” football. This will only help us and our youngsters in the future.

Taxi for Frimpong! Hopefully he’ll sign for Hearts of Oak while he’s out there and find his level.

Why are you even here?

I wasnt a supporter of frimpongs decision to switch allegiance as i do not advocate biting the hand that has fed you. however the decision has been made so the best thing now is to get him on the plane for the acon. the experience will do him the world of good

He was never getting into the England side. He made the rite choice. To bad the same cant be said for gooner Carl.

Wolves are currently in 3rd place in Championship, so I’d hardly dismiss the suggestion that he go play there.

They must be doing SOMETHING right.