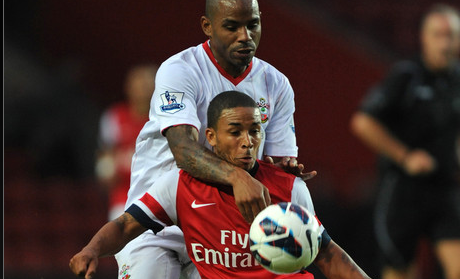 During last season it was not uncommon for Arsenal to go nearly three weeks without having to fulfil a fixture at Reserve level. The subsequent shake-up of football at second-string and youth level for this season, however, has meant that the club’s youngsters can now sample the life of an experienced footballer- by being involved in games every three days or so.

Striker Chuba Akpom, for instance, has had quite an eventful week. Having emerged off the bench at the Madejski Stadium to help set up a goal in a 2-2 draw with Reading U21s, Akpom was subsequently handed his maiden first-team call-up for the Champions League trip to Olympiacos, before impressing last night as Arsenal secured progression in the U19 version of that competition, the NextGen Series, with an entertaining 4-2 dispatch of a dangerous Athletic Bilbao side.

Akpom was one of several youngsters to be involved with the first-team for their excursion to Greece. Fellow forward Zak Ansah, just back from a long-term injury, and Swiss defenders Sead Hajrovic and Elton Monteiro, also made the trip, whilst Jernade Meade, on just his second senior appearance, was largely impressive before being replaced by another youngster in Martin Angha.

Meade and Angha were rested for the U21 game with Reading, but the game provided a moment to savour as forward Nigel Neita scored his first competitive goal for the club at any level in almost two years following a neat piece of skill to elude the Reading defence. The ice-cool Thomas Eisfeld was also on the scoresheet, although the German wasn’t able to be called upon for the first-team this week as he, like fellow foreign youngsters Jon Toral, Kristoffer Olsson, Hector Bellerin and Damian Martinez, is not yet eligible for the Champions League B-List.

The NextGen Series fixture last night, meanwhile, was a pivotal one for Terry Burton’s side as they knew that victory was required if they were to progress to the next phase of the competition. They got off to the best possible start when Hajrovic headed home a rare goal, but were pegged back when a penalty was harshly awarded against Isaac Hayden and Aguer Aqueche stepped up to score.

Arsenal eventually took control of proceedings, though, with Ansah, Toral and Hayden all finding the net and, even though Bilbao pulled a goal back late on, Arsenal held on for the win and could now face the likes of Barcelona and Inter Milan in the knockout rounds.

The U18s continue to struggle, however, with Steve Gatting still without a league victory after his team went down 5-3 to their Reading counterparts at London Colney last weekend. Austin Lipman scored a brace to add to Tarum Dawkins’ second goal of the season, but it was a largely disappointing display from Gatting’s side.

There were some positives to take, however, in the performances of schoolboys Jordan Brown, a striker, and Aaron Barnes, a right-back, with the latter making his debut at that level.

Really good to see that we have some promising youngsters, as always. Just hoping they will make a difference in the first team in the next couple of years

Great update Blogs! More of these (as news is available) would be really appreciated – always good to know who to look out for 😀

Looking forward to seeing Eisfeld in the first team

True, had wondered why he wasnt being played in the CL but this article clears that up.Cheers

I Hope wenger gives chance to eisfeld and gnabry in PL matches after the capital one cup fixture against bradford city.

I would say let eisfeld to develop at the team other than first team for this year. So he can get used to scoring and other technical moves. Remember he got injured for quite long time before.

Eisfeld is promising, very consistant at U21 level, also Hector Bellerin is also fantastic for the U21’s. For me they are the ones to watch, highly reccomend anyone to get down to barnet for U21 games, cheap tickets and if you dress smart you can pretend to be a scout ! t