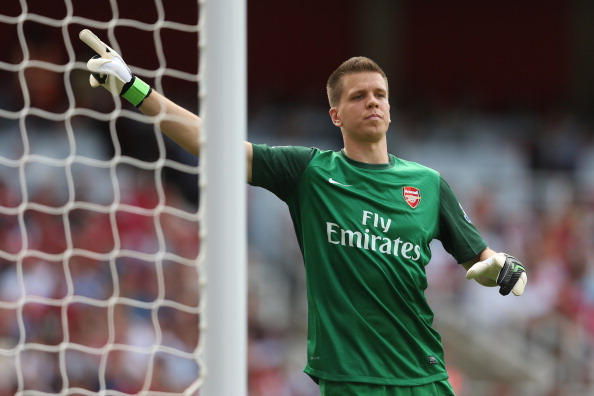 As Arsenal prepare for their third encounter with Swansea inside a couple of months both Wojciech Szczesny and Francis Coquelin have spoken about the importance of overcoming the Welsh side in this evening’s 3rd round FA Cup replay.

Michael Laudrup’s free-flowing team, spearheaded by in-form Spanish striker Michu, have already proved themselves difficult opponents this term, building on their 3-2 win at the Liberty Stadium last year with a 2-0 victory at the Emirates and the recent 2-2 draw in Wales.

Having developed something of a hex over Arsene Wenger’s squad, and with the club coming to terms with Sunday’s defeat against (shit…obviously I meant Man City, we don’t lose to Chelsea until next Sunday), young midfielder Coquelin has made clear it’s a must win encounter.

“After the Manchester City result it’s important to get our mood back up again and win a game,” he told Arsenal.com.

“We showed great character to come back in the game at Swansea 10 days ago, and now we have to show the same qualities. We need to win this one, and with the tough of run fixtures coming up over the next few weeks it could be really good for our confidence.

“They played very good football, but then they’re an excellent team with a very good manager in Michael Laudrup.

“They play a quick passing game and make it dangerous. It’s a similar style to ours, and I think they’ll give us another tough game.”

Wojciech Szczesny also spoke of the need to rebuild confidence following a tough start to 2013.

“We have already lost against them at the Emirates, managed to get a draw [at the Liberty Stadium] and I hope we can qualify for the next round because we realise the FA Cup could be a massive chance to win a trophy this season,” the Pole told Arsenal Player.

Given that it’s obvious we’re not going to win the Premier League and are major outsiders in the Champions League, the 23-year-old also highlighted that England’s premiere cup competition represents the most realistic chance of our ‘new’ generation ending the club’s god-forsaken trophy drought.

“We need a trophy for everyone to start believing that this club and this team are good enough to win trophies again.

“To not win anything for seven years is not good enough, any trophy would do but we realise how important the FA Cup is for the fans. We would love to do it.”

Arseblog News can’t fault the sentiment, let’s hope we’re not all talk and no trousers…again.

Proper Arsenal is Woj. Arsenal No.1 for the next 10+ years

If only he was as good on the pitch as he is off it. Time to focus SZCZ.

He is good on the field , sh*t at distribution

He’s not decent enough for the mighty royal Arsenal. Any kind of a competitive backup or replacement would be appreciated.

Kind of funny that Master Bates should be stimulated to respond to Penis.

Lets buy Michu before this game. And when he gets to North London, tell him to put on Arsenal jersey and play for us.

that would be Michu-sing of transfer funds.

I’ll get mine too

While you’re there, grab your credit card. Arsene has forgotten his pin number and Ivan lost his on the piss.

Remember the invincibles because we aren't good anymore
Reply to  vino

And Peter hill wood never signed up for one anyway

“We showed great character to come back in the game at Swansea 10 days ago, and now we have to show the same qualities.

Arsene also said something similar after that game.For fucks sake we failed to hold onto a lead with just 10 minutes remaining

I thought we ended our trophy drought , didn’t we get the top four trophy last season ?

No. Last year we won Super Community Copa Libertadores League of Africa. It’s given for finishing third and it’s so much more prestigous than acclaimed and famous top four trophy that it should make everyone stop being sarcastic for a while…

Shouldn’t really bother reporting about what gets put up on Arsenal’s website or player. Almost as repetitive and predictable as our press conferences.

It would make a refreshing change if Woj had a quiet night tonight and we actually give them a bit of a flogging. Erm well we could hope.

Don’t leave any Miccu shape holes in the defense boys.

Let’s give Mannone a chance in this match, I hate to see what’s happening to him after he was fooled into believing that any good performances he had during Szczesnys injury would result in him challenging for the number 1 jersey

Arsene should spend our transfer budget having mike dean Wacked off, we have only won 2 of the last 16 games that he has reffed for us. Maybe arshavin could wack him off down at the Russian baths, or some guy with really rough hands, that would learn him.

the only sam is nelson
Reply to  Sol goodman

Nah, we’ll just ask arnold schwarzenegger to do it in the Russian baths, then get him to team up with Jim Beluschi and they can eradicate out the Sp*ds.

the only sam is nelson
Reply to  Tenzo

Arshavin would do it tomorrow or maybe the day after or maybe after that.

I hope we don’t let them kick around Jack like the cunts from city did at sunday, someone should really step up and give jack some cover.

this should give them a nice boost before… oh, shit

deano
Reply to  the only sam is nelson

Well he wants a challenge and thats a real challenge. Dortmund home and away and champs league rest of the season he can get back to having his break.

Being a big club should never include taking scalpd.. least of all swansea :’@

Thought the same thing myself. How the mighty have fallen, that we now consider Swansea a “scalp”. Good grief.

Ahh Wojciech. A foreign footballer who has real passion and loyalty to the club who gave him an opportunity.

Hoping for a positive result. I’m pretty sick and tired of the negativity and pessimism.

Gutted reading around how people are actually hoping for arsenal to lose. Which will apparently put pressure on Wenger to get sacked or something like that.

All I have to say is that regardless of what you think of him as a manager, he is still the manager of the the arsenal. The team we love and should support unconditionally. Hoping for doom and gloom for some misguided bigger picture is appalling. COYG!

Would be nice to see Eisfeld tonight.

Wenger After Match Press Conference Generator v1.0 1. We have showed… a)quality b)character c)quality and character 2…. I think that… a)we deserved a penalty b)Theo wasn’t offside when he scored c)we deserved a win but that’s football 3. … about Theo… a)he will most definitely stay b)we’re still working on his contract c)he is committed to the club 4. … plus we’re working hard on the transfers because we have shitloads of money and let’s not forget… a)we just signed Diaby b)we’re about to sign Rosicky and Arteta c)it’s hard to find somebody as good as Rosicky and Arteta so… Read more »

Best keeper to play for us in recent seasons gone but by far the worst kicker of the ball. Needs to work on how to clear the ball or kick them its gnna get him in real trouble sooner or later dont want sagna to go all front and come back to receive the ball because of his kick. Dont understand this how he cant clear the ball when he can shoot on goal so well.

Big game… hope it can revitalise us a la Spurs last season.

Why do I feel I have heard all this before from the various team members. Christ I hate being so negative about Arsenal.

I love Wozzza and he will be great for us but our defence really have to be on the ball tonight.

Come on guy smash a few past em and get us back to winning ways we need the FA cup back with us.

Urgh, finding it hard to feel positive at the moment,
for all those unhappy with Ches,
remember Almunia,
the horrified stare he had every time a player entered our half,
the sense of hopelessness we all shared when anyone crossed anywhere within a 3 mile radius of Almunia
now think about Ches
there we go, a positive 😉