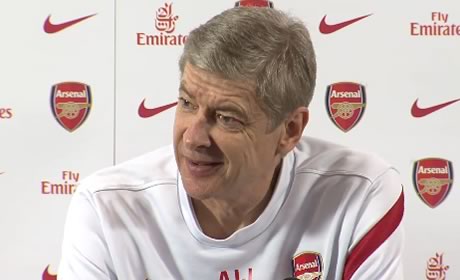 Arsene Wenger is not underestimating the threat of Blackburn Rovers in the FA Cup tomorrow, but has hinted he’ll rest some of his more overworked players for the game.

The cup presents the club’s best chance at a trophy this season, but the manager is clearly mindful of Bayern Munich on Tuesday and the importance of the Premier League schedule.

At his pre-game press conference, he said, “The players who will not start are the players who have played many games recently. “I will not take a risk with the rest of the season in mind.

“We are favourites, Blackburn have nothing to lose and they have a squad of Premier League players.”

Thomas Vermaelen is “90/10” to make his return to the team after an ankle injury picked up against Liverpool, while Jack Wilshere and Laurent Koscielny are rated 50/50.

It’s likely Wenger will err on the side of caution with regard both players, while the likes of Abou Diaby, Tomas Rosicky, Alex Oxlade-Chamberlain and Gervinho, back from the African Cup of Nations, could all start.

Arsenal are without the suspended Carl Jenkinson.

This does not give me confidence.

Squillaci at CB does us he me confidence.

I she them they agree.

Arsenal, we’re on your side
Our love we can not hide
Our hearts are open wide
For nobody else but you

I just want to see Rosicky start for once. He should be playing so much more alongside Cazorla but Wenger prefers Ramsey, don’t know why. Rosicky’s experienced, a clever passer and surprisingly an amazing tackler. Deserves too play much more.

One word, Diarrhoea. He might shit himself after seeing what a sweet assist he has given.

Also, got nothing against Ramsey, has shown amazing spirit last couple of games. But I don’t see why you wouldn’t give someone a chance who adds calmness, creativity, and can influence the team with his passing. Sometimes I feel Wenger expects bit too much from Ramsey. I’d chose Rosicky whenever he is fit, would love to see him link up with Cazorla and Wilshere.

that’s the thing isn’t it, clearly he isn’t fit enough since his last injury/lapse of first team time – what on earth makes you think Wenger would always choose Ramsey over Rosicky if Rosicky was fit and willing? He’s even clearly stated how much he enjoy’s Rosicky’s game, and even sent him on a friendly to get some game time…

Ramsey has been playing much deeper.

Wenger prefers Cazorla and Wilshere in that position.

I suspect he’ll go with Rosicky in there tomorrow though. Here’s hoping everyone’s faith in him is justified. Of course he’s good enough, but returning after such a lengthy lay off isn’t easy.

A hattrick for Gervinho!

With Bayern on the horizon we need fresh legs..resting some of the usual starting 11 against Blackburn is essential..

D would have got more thumbs if he’d put :

Arsenal are without the suspended Carl Jenkinson.

The only way your team would happen is if the most cynical fans are right and Wenger really doesn’t want to win the cup, but would rather get thrown out.

I believe most of our first should be rested for saturdays game. the formation should be Szceszny Sagna – Miquel – BFG – Monreal Diaby-Rosicky The Ox – Eisfield – Podolski Walcott (60 mins then Giroud) Its the perfect balance between youth and experience without risking the fitness of important players ahead of Tuesday clash with Bayern. I would start Podolski purely because he was rested at Sunderland and shouldnt have too long a break and the inclusion of Eisfield and Miquel is a risk , but we should have the firepower in reserve should things backfire. A welcome return… Read more »

Unleash the CANNONS
Reply to  Dzzz

The Coq would be less of a risk than the Iceman in midfield and we can even have Yennaris (or Coq) at right back should the boss decide to rest Sagna (I hope he does). I think Gervais should start with Ox and Poldi in attack; btw id love to see the Pod in the CF role.

That doesn’t sound like a team that would have played much together in training.

Good point, but Arsenal have such a consistent system, that I’m sure every player knows their role pretty well by now.

@Dzzz:
Ramsey could even play in there,as either he or Poldi won’t start on Tuesday.
Arteta, Wilshere, Santi, Theo, Giroud will all surely play v Bayern.

Let’s not get carried away just because Ramsey playing as Right Back against one-trick pony Sunderland managed to help us keep a clean sheet. If anything, Arsenal have been finding difficulty to really finally polish the fine tuning, rhythm, and passing game and have only maybe looked more comfortable with less wasted chances since two games ago. You can’t expect to switch half the players and continue the flow as it is now. I predict tomorrow’s first half could possibly be quite slow, 50/50 on whether we score or not, I suppose. If Walcott plays, I thoroughly expect him to… Read more »

Yes, good idea, rest the players that haven’t played in over a week 😉

Funny the days when the FA cup replays could go to 4 or 5 replays before you’d get a result. Same 11 starting most of the time too lol

bard
Reply to  Mark the spark

Those days are over. Money’s fuelled an improvement in fitness that means rest is needed a lot more to compete.

Rufusstan
Reply to  Mark the spark

Yep, it was so impressive in those days when players could go on the piss the night before a match and still keep up with the pace of a game.

Bottom line, you cannot compare the eras. Either you get the pace and intensity of the modern game or the consistency of the old game; not both. (Try to get both and you just break players).

I remember the days when you respectfully referred to Arsene as Arsene, rather than “Wenger”, a barely concealed “no trophies cunt” assault on his being French.

You forgot the accent you disrespectful cunt.

Looking forward to uumm…Gervinho’s massive forehead running around hither and thither. Pray he carries some AFC form into this match. It has been a while since he did something of note.

Jeff Stelling reckons Gareth Bale is better than Cristiano Ronaldo….the only thing he’s better at is peeling bananas with his feet.

Does Gareth Bale realise what a prize twat he looks like with that silly bloody thumb heart sign he does. Grow some balls, you’re a man aren’t you……….we’ll chimp/man anyway

Spot on. What a bellend this bale is, he does the thumb heart thingy with a cheesy smile and ends up looking even more horrendous……

Hope spurs sell him though and in turn do their all to keep shit adebayor….

He’s a MAD magazine faced greasy chimpy Sp*rs cunny and his hand heart celebration bollocks will look like the empty gesture it really is when he fucks off to Madrid in the summer and Sp*rs finish back in 8th or 9th place next season where they belong. He’s a good footballer, very selfish and nowhere near Messi or Ronaldo. He hasn’t even managed 30 goals in a year before, let alone 90 like Messi

Gareth Bale’s thumb-heart sign thingy is really his pantomime of what his Mum’s vagina looks like… the only one he’s ever seen.

RM and the Cocks are both overpaid one man teams. They made Lyon look great last night. Which is about their level.

Push ’em back into 5th or 6th where they belong, and monkeyhead will be off to warm the bench in Madrid, beside that other overblown half ass Modric.

5th or 6th sounds just about right… just high enough in the table to nick a place in the Europa Shite League the following season, where they can piss away all their energy jetting off on 5-hour flights to play un-pronounceable teams in the former Soviet Union.

The greatest mathemagician that ever lived (TGMTEL)

Pete
Reply to  The greatest mathemagician that ever lived (TGMTEL)

Chamberlain and Rosicky played in AFCON?

If you look closely you will see a comma. It may be of some interest to you.

I’d do a defence of Yennaris Per Vermaelen Miquel. I want Sagna wrapped up in cotton wool for Munich. No point risking Koscielny if TV5 is playing LB v the Germans

I love your recognition and appreciation of Sagna’s importance to the squad. Which begs the question… why the fuck have we only offered him a ‘disrespectful’ 1yr contract extension at an unchanged salary of GBP60k-a-week which is the same as what Squid/Djourou/Fabiasnki/Bendtner/Chamakh earn?

Alex Song wanted to stay at the Emirates but he chose to leave in reaction to similar ‘disrespectful’ treatment from the Board. Don’t we ever learn from our past mistakes?

Win this and we’r 2 games from a final, can’t help but think we got a real chance on the FA cup this year.

I want to see Eisfeild get some games
Expect to see Gervinho shooting at the corner flag again!

Gerv is good when he has his confidence. Lets give the guy a break and see what happens.

he's so good he adopted a Brazilian name
Reply to  heihaci

Go on Gervinho, pretend you’re playing in AFCON for the Ivory Coast, and imagine that Mikel Arteta is really Yaya Toure and that Olivier Giroud is really Didier Drogba!

Whatever you do, don’t shit in your undies when faced with the opportunity to tap in to an open goal from 2 yards!

Like van Persie on Weds. Ha ha the fucker.

Throwing in my team for Blackburn, what do you guys think?

Thanks a lot, I will consider it.
Yours truly,
Arsene Wenger

Gervinho to score a hat trick. Or completely miss an open goal.

Slightly off topic but relevant. More so than team lists, I cannot believe how the FUCK Arsenal head into another crucial game in their season, and the referee is…….yes you guessed it. Mike Dean. I sort of assume that everyone knows we have previous with the guy; but in case: We’ve avoided his clutches for just over a month, since he sent off Koscienly against City. The only win the guy has given us in around 4 years was the 5-2 last season against Spurs, and even then we had to endure his dancing celebration as we went 1-0 down… Read more »

Since he correctly sent off Koscielny ?

paid for by Sir Alex Rednose
Reply to  Arsenal Fan

Can we get Koscielny to rugby tackle the referee Mike Dean so he ends up in the hospital and physically unable to hurt our Arsenal? How much money is Mike Dean receiving in his Swiss bank account from that poker-faced cheating octogenarian in Manchester, anyways?

He is an enormous wanker.

All us fans going to the match tomorrow get on he’s back from the start of the match to end.
Just a few ideas
1 inform we know who he is a cheat
2 question he’s parentage
3 any other ideas?

A “Gervinho hat trick” is, like, seven or eight goals?

Or is it when he skilfully disguises the true extent of his forehead with a craftily placed trilby?

This is the game I’ve been looking forward to for a while, an FA cup win would be a massive, massive achievement this season. And it’s very possible too.

Arsene underestimated a blackburn team on a winning streak and now we are looking at 10 years without a trophey.

This could be the end for arsene

I rather hope so. I’d much prefer to see him leave now than face the ignominy of being sacked. Oh wait… that’d mean Kroenke or Gazidis giving a rats ass.