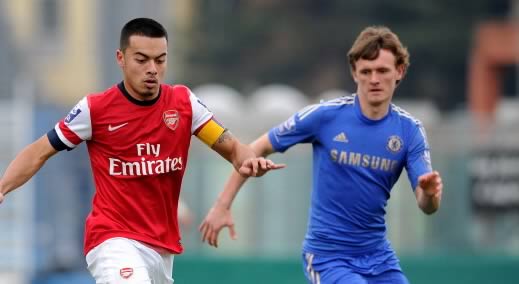 Arsenal’s remarkable run in the NextGen Series finally came to an end in Lake Como this afternoon as they lost out to Chelsea in a seven-goal thriller after extra-time. Chuba Akpom had put Arsenal ahead early on, but Chelsea scored three times in an eleven-minute spell in the second-half to seize control of proceedings. The Gunners staged an incredible comeback, however, with another strike from Akpom and a stunning goal from Serge Gnabry sending the tie to extra-time, only for the impressive Lewis Baker to secure victory for Chelsea with just four minutes remaining.

Coach Terry Burton named the same side that dispatched of CSKA Moscow in the Quarter-Finals on Monday, with the only alteration being a tactical switch that saw Thomas Eisfeld and Kyle Ebecilio switch flanks.

Eisfeld had the first opportunity of the game, sending a free-kick just wide of the near post, before a poor clearance from Chelsea goalkeeper Mitchell Beeney saw the ball fall at the feet of Serge Gnabry in front of goal, but the German youngster saw his shot saved, with Beeney also equal to his follow-up effort shortly afterwards.

Kristoffer Olsson then saw a sliced shot gathered as Arsenal enjoyed the better of the opening stages, although the Gunners were somewhat fortunate that Islam Feruz shot just wide after Sead Hajrovic’s poor header conceded possession in a dangerous area. Deyan Iliev then had to be alert to gather the ball under pressure and, at that stage, it seemed as if Chelsea were beginning to assert themselves on proceedings.

Arsenal, though, would go ahead with the next move of the game, and what a move it was. Following a typically swift break forwards instigated by Gnabry, Hector Bellerin received the ball on the overlap, as he has done on so many occasions this campaign, and fired the ball across goal where Chuba Akpom was on hand to turn home for his first goal in this competition since the opening matchday against Marseille.

Lewis Baker sent a well-struck free-kick wide for Chelsea as some means of response, but Ebecilio, who hadn’t had much of an impact until that point, shot straight at Beeney. The final stages of the first-half were rather scrappy, not helped by a poor pitch in Italy that resulted in Chelsea being forced into a chance before the interval, with Connor Hunte replacing the injured Adam Nditi. Isaac Hayden also picked up a knock for Arsenal, but was thankfully able to continue, before Chelsea put the ball in the net on the stroke of half-time only for the strike to be correctly ruled out for offside.

Chelsea appeared to start the second period with an extra sense of initiative and, soon enough, they found themselves level after Gnabry pulled down the dangerous Reuben Loftus-Cheek in the area. Baker stepped up to take the penalty, only to see his spot-kick well saved by Iliev, but, rather unfortunately for the Macedonian shot-stopper, Feruz reacted quickest to the loose ball and promptly found the net to make it 1-1.

Chelsea were now brimming with confidence, with Alex Kiwomya finding Feruz, who shot wide, before Arsenal mustered a brief response with Gnabry striking the wall with a free-kick and Ebecilio seeing a shot saved after a clever turn just outside the area. They had an excellent chance to restore their advantage when Martin Angha, on a rare venture forward from left-back, crossed invitingly for Olsson, but the Swedish midfielder really should have done better than to skew his shot over from close range.

Arsenal were made to pay for their profligacy just moments later when Baker attempted a speculative shot from distance which somehow squirmed through the hands of Iliev, who really should have done better to hold it, and into the net, to put Chelsea into the lead for the first time. When Kiwomya crossed for the dangerous Jeremie Boga to then make it 3-1, it seemed as if Arsenal’s chances of reaching the Final had evaporated, especially with Feruz coming close to making it 4-1 shortly afterwards.

Arsenal would not give up, however, and, after Gnabry and Olsson both squandered chances, Burton made a double change, with Zak Ansah and Brandon Ormonde-Ottewill entering the fray in place of Eisfeld and Angha. Ansah would have a profound impact on proceedings, producing a skilful turn on the edge of the area and then an excellent cross which Akpom turned home to give Arsenal a glimmer of hope of a comeback late on.

Things would get even better for the young Gunners when Bellerin found Gnabry, now stationed on the right flank, who cut inside to score a stunning goal to send this enthralling tie into extra-time; something which had seemed improbable when Chelsea’s third goal went in.

Both sides struggled to carve out chances with any sort of regularity in the first half of extra-time, although Akpom did shoot over, before, at the other end, Kiwomya’s dangerous cross went without a recipient. Arsenal threw schoolboy Ainsley Maitland-Niles into the mix, with the youngster making his debut in the competition, and Ansah shot over as Burton’s side sought to complete a remarkable comeback, but the last word went to Chelsea, who finally settled matters late on when substitute John Swift manoeuvred his way past Olsson in the area and crossed for the waiting Baker to make it 4-3.

Arsenal’s Lake Como adventure is not over, as they still have a play-off on Sunday to fulfil which will determine who finishes third and fourth in this tournament, and, despite their exit from the competition, they can be immensely proud of the spirit shown, not just to come back from two goals down here, but to progress this far in the tournament in the first place. Not all of these youngsters will prevail at Arsenal, that is for certain, but they will all be grateful for the invaluable experience they have picked up throughout the course of this competition.

Chavski cunts!!! Good effort from our lads though.

Why the insults? Your team lost fair and square..

Who wouldn’t want to insult the rent boys?

Nah, don’t need to insult. They won’t get into the first team anyways there, even less chance if mourinho really comes back, so maybe we can snap one or two.

And which team do you support? I’m honestly curious.

Great effort today. I’ve followed the team througout the tournament, and in just about every game Akpom/Gnabry/Bellerin/& Isaac Hayden really stick out from the rest(Yennaris too I just don’t think he’ll make the Arsenal 1st team), I know most players don’t make the team in the end but I really believe all four of the players I mentioned will make the Arsenal 1st team at some point (Zak Ansha has some real potential as well). And even another youth player Zelalem who many in the club say is the best of the bunch just got cleared to play for our… Read more »

How I wish they get to the finals. Good effort though.

Did you by any chance read the headline?

Did you by any chance read what the actual comment was?

Proud of the efforts of all the youngsters. We all know they’re technically brilliant, so to see some fighting spirit alongside that talent is good news for Arsenal. Hope to see some of them in the first team in a couple of years.

When will we see Eisfield in the first team?

I don’t think anytime soon unfortunately. He was really poor today, but in general other then getting in goal scoring positions (Which is awesome), he usually doesn’t offer anything else in the team (Till now he’s young obviously).

He was playing on the right. It’s not his natural position. He’s going through the ramseyfication process.

If you’re good enough for the first team, you don’t get Ramseyficied out of your natural position on the youth team imo. He’s got to be good enough that there’s no way he gets forced out of his best position at this level.

Have you considered that maybe it’s just that he’s good enough to be played elsewhere besides his best position? It isn’t unheard of nowadays to play midfielders “out of position” for tactical reasons.

Men or boys, our fate against an english opposition in european tournament does nt change..!! 🙁 anyway, a gud effort 4m d lads…

We have some real first team prospects coming through our ranks. I’m excited about Gnabry, Eisfeld, and Akpom.
Miyaichi and Joel Campbell just need 1 more season of playing time (Miyaichi more than Campbell) . And we have Gedion Zelalem who is the youngest and probably most talented of them all. Not all of the young guns will make it, but I have genuine hopes for these six.

Not to mention Jon Toral Harper and Hector Bellerin. Also Olsson and Tarum Dawkins. It would be great if we could replicate Barca or United from 1996. Except with less “cuntiness” and more style, and hopefully more success.

What happened to me?!

Gnabry and Bellerin look like exceptional talents so in my opinion these two will absolutely make it into first team. I also have hopes for the likes of Akpom and Hayden

gutted… managed to sky plus it and watch it through. To bring it back from being 3-1 down is a great achievement itself, Gnabry’s goal was a peach.

should have chucked Arshavin in with these lot to give him a workout 🙂 though i doubt he would be picked ahead of anyone anyway. 😀

Didn’t we all get very excited about Afobe and Aneke… JET anyone? Seems to me like the real prospects break into the team very early (Fab, Jack, Szcz?) If you don’t, you won’t make it with Arsenal. So, just Gnabry then…

Good effort by the lads, actually this is the first time I saw these young guys playing. still cant believe this match was telecasted live in india

Chelsea team younger than Arsenal and mostly English unlike Arsensl

Fed Up
Reply to  Andy Gallagher

So what They wont even make it to that chavcunts first team they too busy overspending !!

fuckdemgunners
Reply to  Fed Up

why are they all hating on chelsea lol? its not their fault you can’t win trophies at any level at all. maybe you should organize a charity match and maybe just maybe you can win it. lol lol lol fuckdemgunners or losers

I mean, otherwise, what else would cause a troll to wander this far from its cave?

This is like an article you’d see on Arsenal.com. You fucking cunt.

Why no mention of the atrocious pitch and godawful referee who Gould have sent off Chelsea’s no.4 for a second yellow on three separate occasions? And the penalty shout we were denied in the 92nd min? Christ, I know it’s only the kids but this match is missing any of the flavour of the game..

Was it edited by detective “just the facts mam” Colombo?

Good Job, but Only the Best ix Good Enough 4 Me.

I blame terry for the loss, he’s such a cunt.

I know Akpom has been in the goals……..and granted I haven’t seen much of him……..but I thought that at times yesterday his work rate was a bit pedestrian. Half arsed efforts to close down etc. I’m probably being harsh on him. Just concerned that he might have a bit of an attitude on him. Am I way off the mark?

I know he’s “one of them” but Lewis baker looks quite a player. Shame (for him) hell never get a shot, such is Chelsea’s scum.
Gnabry continues to impress me would be great if we can somehow wrap up champs league football for next season and he can get a few runs out