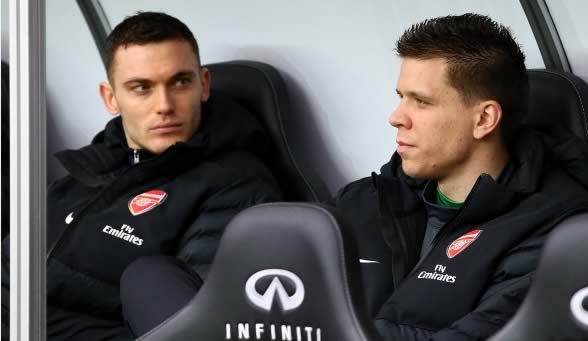 Wojciech Szczesny says that Arsenal finishing outside the top four would be a ‘disaster’ and the club is experiencing its most difficult period since he joined.

Dropped to the bench for his fellow countryman Lukasz Fabianski for the last two games, the younger of the Poles heads off on international duty and spoke, before the Swansea game, to Gazeta Wyborcza about life at the Arsenal and the race for the Champions League spot.

In typically forthright fashion, Szczesny pulled no punches about the current situation.

“It is halfway through March and we’ve lost everything,” he said. “There are still 10 matches left to save the club against the humiliation of all times. It would be disaster not to be in the top four and without Champions League next year.

“We have the ten most  important games in our careers. We are going through the most difficult time since I came here.”

Although he’s been dropped Szczesny continues to see his future at Arsenal, and when asked if he could see himself playing for another club said, “Theoretically yes, but mentally absolutely not. I am too happy to go somewhere else. I believe the Arsenal will start to win again.

“I believe in the philosophy of the club. I have a debt to pay here for the club, I owe them. I just do not want to go anywhere else. As long as they want me here the is no ‘somewhere else’, and I have a contract until June 2015.”

Let’s hope the shock of being benched for a guy who is out of contract this summer refocuses him and he can become the keeper we all hoped he might be. In the meantime, Fabianski holds the gloves.

Thanks to @JackGoonerski for the translation

Szczesny has world class potential , hope that being dropped will only help him to fight for his place and bring out his qualities even more.

Thanks chessa, stating the bleeding obvious

We had enough disastrous moments in this season, let’s leave them behind.

I like this new “two decent keepers” scenario. Perhaps Szczesny and Fab will get into such an extreme level of competition that it becomes impossible to score against either of them. I remain hopeful.

Spuds should reach to the finals of “thursday night football”, and then lost 5-2. Waiting for the St Totteringham’s Day. COYG

I’d go ever further, myself. I hope they will reach the Euro League final, lead 2-0 until the 88th minute at which point Walker (because I absolutely fucking hate that overrated arrogant slimy-looking cunt) will score two completely avoidable own goals and then in extra time they concede three more goals and lose. Additionally, they will finish 6th in the league due to not winning any of their last nine league games thus ending their hopes for Europe next season, resulting in Bale leaving for a good team so next season we will all see what a completely mid-table team… Read more »

Walker’s been talking crap about knowing “the secret to stopping Bale”. That from a guy who couldn’t even stop Stewart Downing. Anyway, Fulham seem to know that secret too. I think their tactic of not lofting 35-yard backpasses towards their own goal was an improvement on Walker’s theory though.

50 Shades of Gandalf the Grey
Reply to  Parisian Weetabix

Thank you Fulham for making us Gooners very happy. As for The Spuds it surely is squeaky bums time. Mind the collapse. Up the Arsenal

Can’t fault his attitude really. He comes across as arrogant at times but he is young and desperate to succeed with us. Fair play to the lad.

Hes to overconfident thats his problem.

And him being dropped should bring him back to earth.

Wonder why he saying something like that now. He should really keep his mouth shut.

ffs why is there ALWAYS someone like you saying this?

He was being interviewed! Would you rather he start complaining about being dropped to cause CONTROVERY? Or perhaps you might lie it if Arsenal players stared at people interviewing them in stony silence?

Jeez relax. My comments on arseblog are always positive. So I dont think he should be saying that, whats the big deal?

I’m going to catch FC Basel vs Sp*rs here next month. Even though I want the scum to have as many Thursday night excursions as possible, I cannot for the life of me imagine myself hoping for them to win!

As much as i have enjoyed our last 2 defensive performances and particularly against Bayern, Fabianski made some fairly decent (if not expected) saves. However, i feel that some people are getting slightly carried away about how ‘amazing’ Fab has been. I’m really not knocking the guy but i think that the way that we have defended as a team has been much improved in the last 2 games, dropping back and letting both Bayern and Swansea come at us, soaking up that pressure and breaking with pace and decisiveness on the counter attack. I still think that Szczesny is… Read more »

the only sam is nelson
Reply to  Wyn

Reina has looked well dodgy this season, to be fair. i think us buying him would seal his fate as the new almunia. we should leave well alone.

[…] Another example, yesterday I got an email from a reader who translated an interview from the Polish press with Wojciech Szczesny. He talked about how Arsenal had to avoid humiliation and make sure they they finished in the top four. There were some comments about his own future too, but nothing too groundbreaking as the interview happened before the Swansea game. We ran the story on Arseblog News. […]