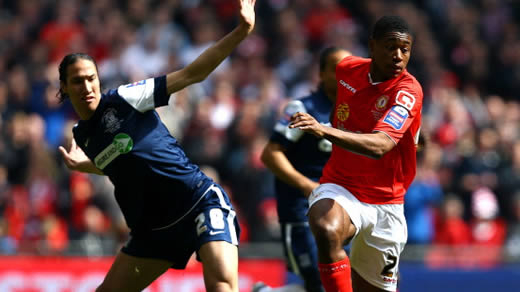 Youngster Chuks Aneke says he’s enjoyed his time on loan at Crewe this season and wouldn’t rule out a return next season if it means regular first team football.

The midfielder, now being deployed as deep-lying forward by the Gresty Road side, has made 37 appearances, scoring 7 goals, for the League One side, and says he’d advise any young player to gain the experience being out on loan brings.

“At the moment I’m still fully focused on Crewe, but I’ll go back to Arsenal in the summer and see what happens from there,” he told thisisstaffordshire.co.uk.

“One of the most important things about my future will be making sure I enjoy my football. That’s when you play at your best and your performances are highest. It’s a massive factor and I’ve genuinely enjoyed myself here.

“I can’t find a bad word to say about Steve Davis or anyone else at Crewe for that matter. I’ve been made to feel welcome in my time here and I’m really grateful for the opportunity to play so much. I would consider a return but I’ll just have to see what pans out.

“One hundred per cent, definitely, I would advise any young player at a Premier League team in a similar situation to come to Crewe.

“The kind of experience I have gained can do wonders. To come in and get a good season at my age is priceless. People would kill for that.”

Meanwhile, Dutchling Kyle Ebecilio has, according to reports in his native Holland, signed for FC Twente. Although there were apparently offers from Anderlecht and PSV, he’s signed a long-term deal with the Enschede club.

And the Arsenal world keeps turning.

Good to see some Arsenal youngsters getting contracts or game time. Pity our pile of deadwood don’t get off their arse and play for someone.

Was Aneke the one who got turned from strkker to midfielder?

I would like to have seen more from Ebecilio, his potential was supposed to be awesome. Sounds like he couldn’t turn up in a congested attacking midfield on big game days though.

Wish him all the best.

Right that it, Giroud replacement against Manchester United on Sunday.

But seriously, I hope he keeps working with this attitude, he can be great.