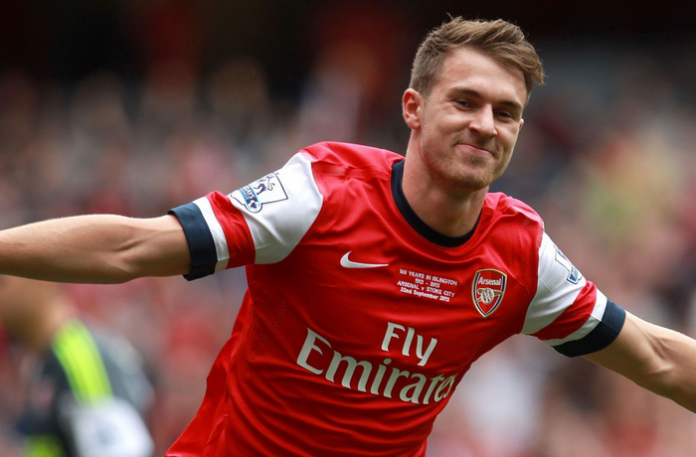 Arsene Wenger says that Aaron Ramsey will be assessed today ahead of tomorrow’s game against Swansea, but the expectation is that the Welshman should be available to travel despite a thigh problem.

There are no other injury issues for the manager to contend with, although Mathieu Flamini has a shoulder problem which kept him out of the starting line-up against West Brom in midweek.

The manager also revealed Theo Walcott was ‘realistically five weeks’ away from playing again after undergoing surgery in midweek for an abdominal muscle problem. That leaves him with some decisions to make, with Walcott’s most obvious replacement, Serge Gnabry, unlikely to feature after playing 120 minutes in midweek.

The manager could use Nacho Monreal on the left hand side, or bring back Mikel Arteta into the midfield allowing one of Ramsey or Wilshere to push forward.

Wojciech Szczesny will return to the side having sat out the Capital One Cup game.

So the rumour was right abt ramsey injury…

Oh how times have changed.

Ramsey a doubt and suddenly everyones heart is in their mouth…..

Not really I think he would have been rested regardless, he’s played all 90 minutes of every single game this season so far.

To the injury gods: Fuck you. You may take our Podolski, our Ox, even our Theo. But you’ll never take…. OUR RAMBO!!! But in all seriousness, fuck off now. Go bother some filthy spud or Manc. Loving your work on RVP.

The biggest Fuck You has to come from the fact that with us, the Injury gods get a taste for something and binge eat. *Flatmate fridge analogy ON/ — Eating both of the goalkeepers? Really? — There was a full pack of fullbacks there last night; what happened to them? /Off We get seem to get clusters of injuries that just make things worse. Now we have 7 players officially out. After Diaby we have: Sanogo (a striker), then Poldi, Santi, The OX and Theo, who are our 4 primary wide players. To add insult to injury, Rosicky is the… Read more »

That’s a pretty good observation about our injuries being in certain areas alone . I cannot fathom why it has been so however . I remember Djourou in RB and Vermaelan in LB . Crazy times that …

once rosicky and cazorla get back i am looking forward to a midfield five of ramsey-wilshere, rosicky-cazorla-ozil…….

Realistically, this is how it’s going to be for the next two months.

Until we’re able to field the most awesome eleven (plus bench) in the Premier League.

hate to say this … but where’s the bloody interlull when you need it?

Or rather over the players.

as tempting as that line up sounds, would prefer either Flamini/Arteta sitting in front of the back 4, Arsenal really have squad depth, something that we have been longing for quite some time

imagine if we got mata!

Imagine if we got Ozil, Ramsey, Wilshere, Rosiscky – Oh wait – We’ve got them already. Fuck Mata.

You’re right. Fuck him – he had his chance to sign for us. Now he’s lumbered with Big Head and his, eh……big head.

Fuck the pair of them.

I think Jenikson will do well out wide..as a short term solution i think it would be worth a punt

With the heart he shows on the pitch, I wouldn’t be surprised if he succeeded as a lone striker.

I agree with that, he mightn’t be the quickest but he’s one of our better crossers of the ball and we know he will get back and defend.

He seems bloody quick to me! Never gets beaten for pace, which even Gibbs does from time to time.

“There are no other injury issues for the manager to contend with, although Mathieu Flamini has a shoulder problem which kept him out of the starting line-up against West Brom in midweek.”

Except that issue then.

I hope this is a mind game by le prof for laudrup.

I’m not saying this definitely should be our team against Swansea, but taking into account the midweek 120 and previous games some played prior too, the potential and existing injuries, as well as the midweek against Napoli, I think this could be the likely team.

Whoever gets picked on the day, I’m sure the boss knows what’s best and picks a winner. Would be fantastic if we remain injury free though… *crosses fingers*

Id rather see Serge on the right than Ryo. He had a poor game in my opinion.

Rambo, let nick hold the baggage in ramsey’s stead, we want Rambo on the pitch

He’s just had surgery. He either got it (or made something worse) in the Marseilles game. Even before he went in, they were penciling in the end of the International break (Roy must be loving that) for his return. Putting my cynical head on, I’m wondering how long the team have been waiting for the chance to get this fixed. Seems interesting timing that they do this now. Outside of the Napoli game its pretty quiet (for Arsenal) in the next few weeks. Once Theo is back, we seem to have a run of: Dortmund, Palace, Chelsea (Cup), Liverpool, Dortmund… Read more »

By the way (keeping tinfoil hat on), depending on where Arsene is counting his 5 weeks from could mean.

If from the injury date, it perfectly lines up with the first Dortmund game.

If from today, he’d be looking for a game in the last week of October for fitness, and we just happen to be playing Chelsea wed/thurs that week in the cup.

Gotta go, there is this funny black helicopter thing buzzing around the garden 🙂

Why o why are we such a cursed team?

as long as giroud and ozil are fit, fingers crossed

Who will win at the training ground ? 🙂

The team with Cazorla in. Doh!

On second thoughts, fuck me; those are some great elevens!

Is that Pires training with the team in the pics on the club website today?

99 Problems but being a Gooner aint one

Fully expecting rambo to pull an actual ‘RAMBO’ and apply an open fire on a stick to the injury and heal immediately.

Most likely starting 11 IMO against Swans.

Where’s the goalkeeper? Your team doesn’t have one. Mind you it could be a good stunt to pull on Laudrup. Chestnut starts as a second striker and scores a hat trick but dies of a heart attack from racing back to save shots every time Swansea attack. Flapandski comes on but forgets he can use his hands and dies of a brain haemorrhage after heading 52 shots off the line. Arsenal win by 8 goals to 7. The fans go crazy with excitement and all league clubs sack their goalkeepers in the interests of football. David Beckham comes out of… Read more »

Ozgun- where can I get hold of some of that you’ve been smoking (or drinking)?

It’s strange playing Swansea. they’re about the only team we play whom I hope we don’t better. Just beat them a bit. I like them!