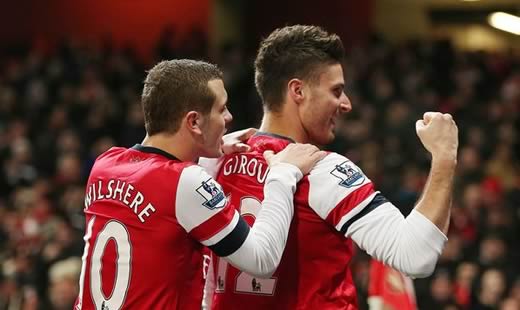 Olivier Giroud says he’s happy to be judged on his all-round game and not just his goal-scoring record having earned plaudits for his delicate touches in the build-up to Jack Wilshere’s universally appreciated goal against Norwich.

A man well versed in pretty things, he uses a mirror after all, the French striker admitted he’s proud of his role in the flowing end-to-end move against the Canaries explaining that it’s his responsibility to be unselfishly help teammates.

“It is a great thing because the goal was shown all over the world – I am proud of it,” Giroud told Arsenal Player.

“It is a quality when you are a striker to not always be greedy and when you have a team-mate well placed on the pitch, in a good position, you have to assist him.

“Strikers are judged on their goals but we must also [provide] assists and that is what I try to do: help my team-mates.

“It is easy to play with people like Jack, Mesut, Santi or Tomas – all my offensive team-mates. We have good relationships on the pitch and when we play one-touch football like [against Norwich], it is a pleasure.

“We try to do it in every game, and when we succeed it is fantastic.”

Giroud now has four assists this season in the Premier League, one more than his entire total for last season, underlining quite how much he’s improved his play in and around the box.

“I think technically I had it before, maybe I progressed because we have worked on it a lot in training,” he reflected when asked why things have clicked this term.

“It is also [down to] confidence. I did well from the start of the season, I had good preparation with the team – instead of last season when I wasn’t here from the beginning – and I scored early in the pre-season games.

Bang a couple in over the next three games Olivier. Go on. You know you want to.

He could bang me anytime..

Of all the inquisitive hobbits, you are the worst!

shakira
Reply to  The Artist formerly known as DangerMouse

i’ll rather have my kids looking like him rather then stone faced pique!

Every week I love this guy more & more. Such a classy & quality player.

Good for you then son, now get in there and ‘flick’ those mugsmasher, then the smasher.

Top striker.. I hope he gets 25 goals this season.

We’re all proud of it too, you handsome devil you.

As far as I have seen, Giroud seems to specialize in dinks and smashes. With regards to that, its his position over the subtlety of kicks…

About Sperez his remark about our lack of tactical pedigree from Wenger and him banging on about us conceding too many goals I just would like to link him to this http://www.arsenal.com/first-team/tables?season=2012/13

If he doesn’t want to open the link: Arsenal had the second best defence last season.

I might be the only one, but I feel that Wilshere goal could be our undoing in a strange way. Don’t get me wrong – it was incredible, but the players will get overly encouraged by this one-touch play, which has led to three very tippy tappy and weak performances in the last few weeks. I agree that the Chelsea result does not matter, but the performance was a little worrying in my opinion – i recalled one attack where we finally managed to get into their box and three players backheeled it with their first touch to another player… Read more »

Arteta is back. His sending off only meant a one-game ban which he served on Tuesday when we played Chelsea.

TV, while being great in his own way, I don’t think has the qualities for being a DM for Arsenal at least – just look at Arteta’s passing – his distribution ahead of the defense is the key to our attacking play..

Get a grip, against opposition like norwich any cock can do it…try against the pool…This situation we face now is so familiar. Every season we enter a series of games that are decision makers on our progress and Wenger dithers and messes the entire lot up. Wenger looked clearly upset the Chavs beat us but he then pretends he doesn’t care by saying the Lpool game is more important- and if we lose that will he say the Dortmund game is more important and when we lose that the Manure game will be more important. Wenger believes he can choose… Read more »

If any cock can do it, then why has nobody done anything like that for years and years.

why do you even bother?

He’s an idiot. Parents are probably idiots too.

Yes – I am really going to listen to a man who seems unable to grasp the simple concept of paragraphs.

Guys what you make of the Pato rumors?? I think he’s alright, but too injury prone.

Yeah if Sanogo passed the “injury prone” with flying colours then pato is a sureity.

Look at this: http://www.youtube.com/watch?v=usUYH0vk5Dc It’s from last week. Pato is the most criticized player in Brasil, right now. His team got eliminated from the brazilian cup with this ridiculous penalty taken by him. He’s got some talent and hasn’t got much injuried recently, but his carelessness for the game, not just in this penalty but also during the game and even in the interviews, is astonishing. They say he’s a 24 years old veteram, more worried with the media, the parties and his girlfriends – Things that wouldn’t matter if he produced on the pitch, but that’s not the case.

Thank goodness poldi is back in training…

Hate to be the one to tell you but Podolski won’t be back for at least two weeks yet, he’s only running at the moment 🙁

No. Poldi is not training yet. He is only outside running. Diaby is a bit short. He appears jaded and that’s two weeks for him.

I hope we destroy them on Saturday. Our season’s hit a lull and we need to cement out position at the top by reminding Freddy Mercury why he should have signed for us!

While Freddie was an amazing front man, I’m not sure he was the type of frontman we needed….

I will take any win. It is a difficult game, made tougher by our absentee(s).

He did want to break free, and had a great bicycle kick and could have been our best friend, even got us singing we are the champions but given his behaviour he really should be living on his own.

Perhaps Another One Bites the Dust is the most apt one for Suarez!

There’s a Theo shaped space to fill in the starting line up.. When’s he back??

Falcao in January is all we need.

As back-up for Giroud of course.

I sang “nanana naaaa Geee-roooo!” in the pub I was at when Wilshere scored that goal. People were all “Dude it’s Wilshere who scored…??” and I just went “Dat assist!”

Couple of assists and a nice subtle goal on Saturday night would be lovely. Lets put Brendan todger in his place!

Aaaaah Giroud….I didn’t realise how important he was to our attacking play until the Chelsea game! Hope he bags 25+ goals and picks up quite a few assists too.

You can do it. Don’t mind the game vs Chelski. I’m pretty happy we out of carling cup. Should be out from FA cup too. Let’s just focus on premier league and maybe chammpions league. We don’t have the depth for all the competitions. I’ll be super happy if we just win the premier league. Buy more players in the summer defense our title and go for the champions league next year. If Giroud has more goals than RVP its like a cherry on top of our league title!!!

I really like Giroud; even last season when he was struggling a bit I thought that he was a decent striker who could make a great contribution to the team. But he’s not the world class goalscorer who will win us the Premier League. The most disappointing thing about Tuesday’s game was, after Wenger rightly rested Giroud, the sight of that waste of space Bendtner in an Arsenal shirt. But, of course, we should never have been in this position. The hopeless Dane should have be jettisoned at least two years ago, and, like I said at the end of… Read more »

Best striker in the prem on this form. Hope he doesn’t burn out given there is no substitute.

I was harsh on those that have been harsh with Bendtner. But after just re-watching the Giroud’s goal against palace it’s easy to see people’s frustration. The HFB makes even some midfielders look just plain lazy.

Aside from scoring goals, I can’t imagine any other striker in the Premier League has contributed more than Giroud this season. We ask a lot of him: defending set pieces, receiving most of our contested throw-ins and long balls, leading the defensive pressing efforts, and holding up the ball to link with the midfield often on his own. The last item, in particular, is what I’ve loved from him so far because frankly he wasn’t very good at keeping the ball or passing last year. As for the actual goal scoring thing, his finishing can and will improve I think,… Read more »