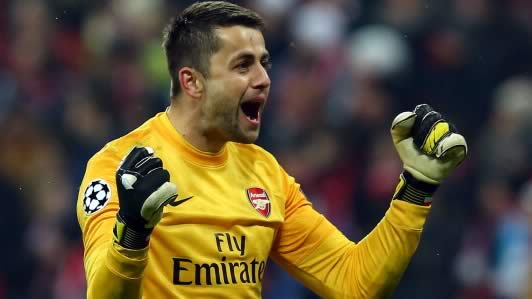 According to the Polish press, Lukasz Fabianski is wanted by Schalke and could move to the Bundesliga side as soon as January if he agrees to a wage drop.

The 28-year-old has played only twice so far this season for Arsenal, against West Brom and Chelsea in the League Cup, and hinted back in September that he’d be open to a move in the New Year if Arsene Wenger continued to overlook him.

While Fabianski hasn’t publicly outlined his desire to quit the Emirates, the new Polish national coach Adam Nawałka is quoted as saying the stopper is on the lookout for a new club.

Despite being on the books since 2007, the former Legia Warsaw stopper has only featured 69 times for the Gunners, providing backup to Jens Lehmann, Manuel Almunia and compatriot Wojciech Szczesny.

His good run of form during a five game stint last term, including a clean sheet away at Bayern Munich, appears to have turned a few Bundesliga heads with Schalke seeing him as a possible replacement for 34-year-old Timo Hildebrand.

The report in Fakt.pl claims the Gelsenkirchen recently failed in a bold attempt to land Iker Casillas from Real Madrid and are also keeping tabs on Kasper Schmeichel.

Were Fabianski to leave next month Emiliano Viviano, on loan for the season, would shuffle up the pecking order in the short-term affording the boss a bit of time to mull over future back-up.

Replacement for Hildebrand who is 3rd choice at Schalke? :{

Fair enough, at his age as a keeper he needs to be getting regular playing time so if he’s not getting it here – and with our other Pole in fine form only injury will allow that – good luck to him

He knuckled down, worked hard and did a job when called upon. Lovely.

I wonder if there are any other squad members who could learn anything from that attitude? If they’re not too busy pulling the doors off their basement swimming pool for a midnight swim, of course…

After Iker Casillas refused Fabianski was the obvious choice!

Would love him to stay, but for his age, he deserves more playing time

Will they take Bendtner too if we let Fabianski go for free?, alternatively we could pay them a tenner

I want the guy to stay. He does deserve more first team football but with Szczesny being in such spectacular form it’s going to be hard for him to get it here. If he wants to fulfill his potential then he’ll have to move on. I just don’t know who I would want to see replace him who would be happy playing second fiddle though.

Sounds like a good deal for all parties. I’m convinced he would be first choice at Schalke as they never had a decent goalkeeper since Neuer left. Speaking of Schalke and Neuer, have you guys ever seen this? http://www.youtube.com/watch?v=VD-mvkPAUGQ

I don’t want any of our players to leave but I want them all to play as well! Ahh stupid me. Good luck to him if he leaves though.
On a different topic, arseblog, could you please give me a pair of your shoes too? There’s no way I can afford shoes like those and I want to have such shoes like my friends do. So pleasee arseblog if possible please give me a pair too! Thanks! 😀

Considering Szczuperman’s form, it’s understandable that Fabianski doesn’t get all that play time. We’ve also got Viviano as a backup now, so it would be good for Lukasz to play a little again. I want him to go on loan or something though, and not a sale, as I like the chap.

Sorry if the text is badly written. I am running on 100 per cent pure caffeine right now.

Straight swap for draxler? Oh, go on then…!

Swap Fabianski plus cash with Hildebrand. He will be our third goalie.