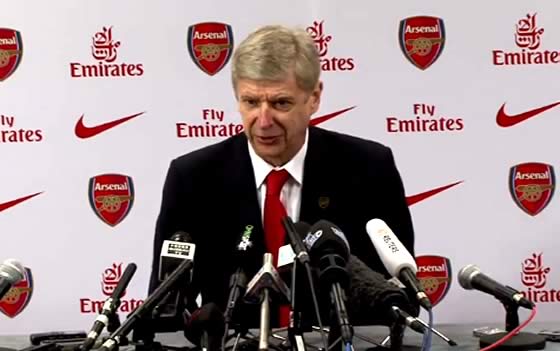 Arsene Wenger has responded to Jose Mourinho’s comments last week in which the Portuguese eye-gouger of people with cancer suggested the Gunners always had favourable fixtures.

Speaking at his press conference today Wenger, who insisted he was dealing only in facts, said, “It is simple – look at the fixtures and analyse it. I trust you will give an objective view.

“You will see Arsenal are behind all the other teams. In the last five years all the objective studies that have been made show Arsenal had less rest than any other team in the top four.

“That is fact. It has nothing to do with my opinion. It is an independent company that made the study that shows Arsenal had less rest than any other team in the top level.”

Mourinho had made the issue personal, but once again the Arsenal manager refused to be drawn into a war of words with an opposite number.

“It is not mind games. It is opinions,” he said, “but I don’t live with opinions, I live with facts and the facts don’t depend on me or Mourinho.

“It is depending on objective analysis. A day is 24 hours and you count how many times you have rest between games. I didn’t make the study, it was made by an independent company. I cannot influence that.”

There are those who will suggest it’s the boss moaning or, perhaps, bleating, but when asked a question about an issue what he’s supposed to do but answer it in the best way possible?

As it is he’s shown up the eye-gouger for the bluffing spoofer he really is. Job well done, if you ask us.

Bang on the money Le Prof. By the way was Rafa Benitez anywhere near Wenger before he started coming out with the ‘facts’ 😉
Moanino is rattled/

“It is not mind games. It is opinions,” he said, “but I don’t live with opinions, I live with facts and the facts don’t depend on me or Mourinho”.
Now that is pure class

Every time Morninho opens his mouth I like him less and less. Never forget that one time he told the press he made “11 mistakes” with the players he sent out on the pitch. Where’s the class? Can you imagine Wenger saying something like that? Never.

As usual Wenger deals with the press and Mourinho like a total professional, more than can be said for a lot of managers. He is the true representation of class that Arsenal have a proud history of.

sorry to put a damper on the spirit, but herbert chapman once bribed a waiter to double the alcohol in the opposite manger’s drink and put no alcohol in his to get the price down for the then record signing from 13,000 pounds to less than 11,000 pounds

But that’s awesome. Are you suggesting it was not?

no, actually i am also quite amused, but probably we can’t pass it off as classy

Depends if he was buying them top shelf hooch or bog standard stuff.

Proud to call this man our club’s manager.

It’s funny reading about Wenger’s statements in the press and then going on to actually watch his conference. You read words like “angry”, “rant” and “complaining”. Then you watch the actual conference and see Wenger calmly and rationally explaining his pov often with a quirky smile on his face. All just to attract a bit more attention, sell a few more papers. Sad.

While the most vile shit comes out of Mourinho’s gob, unabashed insults to his own players, to other managers, to referees at a scale even Alex Ferguson would be reticent to use, all the while jumping ship every three years from one sugar daddy club to the next (£100 says he’s going to PSG (on t’encule) in 2017). And then he is hailed as some sort of exotic managerial genius with a James Bond persona. What a cunt, and what brainless sports journalists the UK has.

You sir have just made the PERFECT description of Mourinho and I’m jealous tbh. However you deserve more likes! Quick Arseblog, give ^this^ man a cookie!

the man who would be bling
Reply to  Bonjour

Truth is its 18 years and the UK gutter press still don’t get this guy. He will never play their game and that drives them nuts.

Arsene Wenger is the definition of Class

Mourinho says stupid shit because he is rattled and scared. He knows Arsenal are miles better than this team and Wenger is a better manager. He is just being the attention seeking kid in the playground.

Sometimes this sycophantic shit gets on my nerves, I seriously doubt Moureen knows Arsenal are miles better considering Chelsea are 2pts behind, or that Wenger is a better manager, considering he has never lost to Wenger.

A dickhead he may be, but your fanboy nonsense makes you sound about 5yrs old.

If you think Wenger has so much class, try to be like him and live in reality.

the man who would be bling
Reply to  neutral

Why do you comment on Arseblog if your name is ‘neutral’?

neutral
Reply to  the man who would be bling

carryover from a previous forum. I grew up in the US and never followed any prof sports, starting following Arsenal ~2006, so I never saw them win anything. I can’t say I support Arsenal either, because I’ve never given them money or gone to a match, I bought a classic jersey once but was appalled by the quality. I’d like to think I keep a more balanced perspective, but to be honest some teams, and players, drive e up the wall. Gerrard and pretty much the whole Liverpool squad, ditto with Rooney and United, but I have respect for Giggs… Read more »

Only one Arsene Wenger! Proud to have him as our manager

” And Mourinho is a twat ” Arsene was heard to mumble afterwards. At least I hope he did.

I think Mourinho is a voyeur and should concentrate on his own damn team!

1-0 to Wenger. Now let’s finally do him over on the grass (Roger him). I feel like he’s the last boss. We crossed him near the start of the game and he’ll be coming back for more later. If we do them at Shamturd Bridge we’ll banish the hoodoo. But then of course there’s the ominous Man Shitteh. Anyways FUCK THE CUNT.

“we are human and open”

no – you needed the money to comply with FFP and united were the only team that came in with the right offer. you HAD to sell him.

“I live with facts”

He just fact that shit up.

Anyone else noticed how much of a cunt John Terry is?

Wish i could double thumb up both of those statements!

Two down votes. Nice to see that Terry and his agent read this site.

(I’d make a crack about ability to read, but thats dynamiting fish in a barrel).

We’ve had more rest than Justin bieber’s had from this scandal to the other!

I think that Mourinho is just a motor mouth, that 9 times out of 10 opens gob before engaging brain (that is if he has one). Just let him rant, he will dig himself a hole large enough to swallow him before he finishes!!!!

Mourinho, a man i despise more than Kastrinakas. If that a possible.

A self obsessed, cheating ego maniac. Wouldn’t loan us Ba because he seen us as a major threat following Ozils arrival , thus ensuring the lads career as now stalled. To coming out with all this bullshit about letting Mata join United because he didn’t want to hurt his career.

Not because chelsea do not have to play them again and he knows United are a busted flush. Oh no…

Mourinho is a cunt, plain and simple and he attacks those he is most scared of, typical bully.

Mourinho = arguments based on whining and his own twisted opinions.

Le Prof = arguments based on facts, numbers and statistics, that the Portuguese can shove up wherever he pleases.

Link to the study ?

I don’t know why this is being thumbed down, I’d also like to read that study.

Must be due to the agitation of having to think about J*se Mou*inho.

Class A cunts in their own right.

Maureen is a spoilt little bully boy that likes to make himself feel better by trying to put others down, only to make a complete turd of himself and have the gall to keep making a turd of himself!!! Grade A numpty

I’d like to read that independent study Arsene refers to. I don’t doubt it’s true but I would love it if the general public and gathered journalists could check the stats. It’s a pity he didn’t reference it. Maybe he’s sent a copy to Chelsea (audio version in case they can’t read).

Harsh, welcome to England mate. Nothing wrong with what you’re describing. And I don’t see why it needs dragging up anyway? Chapman was an innovative legend that made this club and shaped the game overall. We’d all like to think we can change the world with ethics and fairydust.

You’re all fucking wrong!! Mourinho will be sacked by seasons end for winning nothing. You thing RA will tolerate no trophies?

no way jose.. it Juan’t Mata what the fkuc u say… u just gonna be the twat who uses all the dirty tricks in the book to win (even tho it’s not illegal) cos u cant win with proper tactics… u got smashed by pep in spain and u gunner get smacked here by le prof…

I was hoping Mourinho would be less of a cunt this time round but I guess not.

Jose Moaninho – no more, no less.

Mourinho knows we have bad fixtures.. Hes just trying to unsettle us he knows we need to slip up for him to win the league and if we don’t stay focused he will succed… we have a job to do we should focus on that and not worry about what anyone else says. Problem is by reading these comments I fear hes succeded… hes playing mind games and we have to stop taking what he saids to heart hes obviously playing mind games I read his comments the day they happened and I took no notice cause the comments made… Read more »

I have to say the hysterical comments on this thread are pretty funny to read, on top of that, how does Mourinho winding up some posters on Arseblog affect how the Arsenal plays?

Tho must be said Wenger used it to his advantage to make his point hes clever that way..

I though you’re supposed to ignore trolls

Jose came to this country with a clear view of the footballing hierarchy which had Fergi sitting on the top & suck up to him. It was a fail proof strategy as it was trending at that point & he wanted to endear himself to the masses. He especially didn’t want to be in the pesky foreigner legion that AW was heading, which was doomed to fail. AW somewhat unwittingly made Jose loose his job at Chelsea the first time around – by selling the best player in the team (who at that point barely anyone else knew, was past… Read more »

It’s nice to be relevant again. It’s been a few years since other managers tried to wind up Wenger.

This is just Mourinho trying to unsettle Arsenal. As much as I think he’s a turd, he’s not stupid, he’s knows that to catch us he needs to trip us. Sadly for him, he’s not so smart to realize it won’t work.