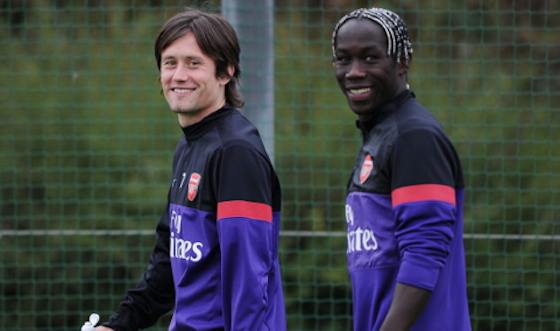 As the transfer window opens and people get all antsy about who we’re gonna buy, January also brings another issue: players whose contracts are running down and who can sign a pre-contract agreement with another club in another league.

Arsenal have issues with a number of players whose deals expire in June. Bacary Sagna is the most high profile of them with discussions apparently still ongoing, however the feeling is the Frenchman may look to use what’s probably the last big move of his career and head for pastures new.

Tomas Rosicky is another, and while he’s recently admitted talks with the club, he’s got some big offers from the MLS and at 33 may look for the security of a longer deal than would be on offer from the Gunners.

There are also Bosman moves on the cards for Lukasz Fabianski, Nicklas Bendtner and Emmanuel Frimpong who may move to actually play some football, rather than his current role of training ground jester.

It remains to be seen what kind of efforts the club will make to keep some or any of the said players, time will tell.

Sagna’s contract runs out, as does Ashley Cole’s at Chelsea. What chance?

You do know they play on different sides of the field right.

even if Cashley could play on every position in the world I just want to bitchslap everybody who’s just considering bringing that c*nt back!

Maybe if we “Took him out for an ice cream”…..
Sprinkled with glass hopefully 😉

I was reading this in my Bentley which almost swerved off the road.

If any of those 4 go I wish them nothing but well. Hope we can persuade Bac and Rosicky to stay though

Yes … what you said.. And we should make them stay ..TR is the heartbeat of our team our performance against Big teams improve massively when he sets the pace. And Sagna is the one guy that even when we struggled I felt could easily walk into The Invincibles team and Improve it. Make them stay.

Didn’t Rosicky talk about wanting to finish his career with Arsenal the way Giggs had with United?

I remember him saying that when he went on that great speech about how young he is in football years, correct me if I’m wrong.

I sure hope he has the same mindset.

Bacary is good. And I want him to stay. But he is not as good as Ralph. Fact.

Oops, the 4 being 5 actually

Lol training ground jester! Its true though, all the Arsenal training photos I see there is Frimpong somewhere, joking around or pulling someones shirt. He has to go unfortunately.

I hear the London circus is looking for a replacement clown.

Surely, Frimmers has a chance.

Would love to see Bendtner and Frimpong move on. Poor attitudes for “professional” footballers. Would also free up space for new striker (Benteke, Rooney or Costa would be nice) and a CDM (Lars Bender). Fabianski could gladly move on IF we get a better replacement (Casillas, Begovic or ????)

Hey hey! There is nothing wrong with hoping for the best.
(Spiderman fan)

Vincent Tan , that is all.

Hope Park also frees up space in the summer for another striker.

Would love to keep Bac and Tomas. Sagna is the best RB around and having a storming season while is our unsung hero as far as I’m concerned. Always adds zip to our midfield and has that fire in his belly when need it. COYG!!!

Aye, sadly I don’t see Sagna staying. Deal should be done by now (yes, I know about Theo last year but still) and there’s been a rather poor attitude towards him by the club (no contract talks, only 1 year extension etc).
Alas, if he does go, I hope we try and get Coleman. He won’t be cheap, but boy can play.
I think Rosicky might stay though, at least for another year.

I hope both stay, but Sagna must be a priority! Right-backs of his quality are hard to come by, plus he has shown to be a very capable CB when needed. Too valuable to lose, imho.

No mind the gap jokes please

If Sagna decides to leave then I’d like us to go for Seamus Coleman.

Our fullbacks see a lot of the ball when teams defend deep so they have to be quality on the attack also.

New deal for Rosicky, can’t imagine an Arsenal squad without him.

Sagnas crosses have been pretty tasty to me. If anything Gibbs is the one to improve his crossing. But if you’re gonna say sagna leaving is less of a blow due to his “inferior crossing” then go on right ahead.

It’s pissing with rain, windy as fuck and my head is killing me. I do hope the rest of the crowd keep the noise down today.

And particularly to some of the old boys that seem to have disappeared lately (Volders, Midfield Corporal, Frog etc).

rosicky will be a hard man to replace ass much as sagna. part of me is excites at this natural turnover, against a backdrop of more transfer spending. can 100% understand if they move on for a final retirement package boost. but sagna particularly will be a big loss unless we buy a seriously high profile right back.

The only person Arsenal still need is Sagna, the rest; let them go.

Please, stop! No Coleman or Barkley.

Have we signed anyone yet? 😉

Sagna can go IF we can find a better replacement.

For the rest, good luck at your future clubs!

Be sad to see them go. But if efforts are to be made I think Sagna is where those efforts should be concentrated. I like Rosicky but I can see him wanting a longer deal and finding that in the US. The others I am not bothered about particularly as they are below standard.

Park is not on a Bosman yet? How did we do this? :O

I really hope bendtner gets a new contract. I know it’s funny but i got a little feeling that he has potential to be in the standard starting lineup and that he will take girouds place (mabye!) and score goals. At least they could give him a chance.

For everyone continuing to bash Bendtner….all I have to say is 2 Premier League goals, 6 points won from those two goals.

I agree Bendtner has been in some respects unlucky he was done no favours by Wenger constantly playing him out wide he is a cf pure and simple , unfortunately for him when he was in and around the first team we did not play to his strengths, unlike now when we put in far more crosses and high balls than we used to,his former attitude did not help him but he is still the second highest scorer at the club at the present time overall , id like to see him stay

I believe Poldi can have a huge future here, its only been injuries that have plagued him. I don’t think he would even want to leave after Mert and Ozil are there with a chance of Draxler coming. As far as Rosicky I would love him to stay a year or two more. He looks as zippy has a fresh nineteen year old whenever he plays. I cannot say enough good things about Sagna. Excellent left back and dputy center for us who has been through it all. Certainly would not blame him for leaving but it does seem as… Read more »

Rather bring in a striker who has experience in CL and isn’t flavour of the month at the moment.

Whilst i mention (below) Michu as an option, I also think Pato on loan could be a good interim solution should we find it hard to land say someone like Costa (with every club likely to chase his signature and his agent likely to play games)

Both Pato and Michu should not be cup tied and both are familiar with some of our players. Michu knows Santi well and Monreal, and Flamini should be more than familiar with Pato.

You forgot Mr. Wenger as well Blogs! The most important one of the lot!

1) Sagna. It will be great to have him for at least 2-3 seasons more. It will afford us time to bed in Bellerin and continue to see how Jenkinson develops. However should he choose to leave in May, Debuchy or Seamus Coleman may be great replacements for us. 2) Rosicky. It may look like his last season for us and he is having a storming one showing the hunger to win a trophy that has thus far eluded both him and the club. Again, whilst we consider striker options in the window, Michu (although not at his best) could… Read more »

Stay Bacary! Stay!! We love ya!