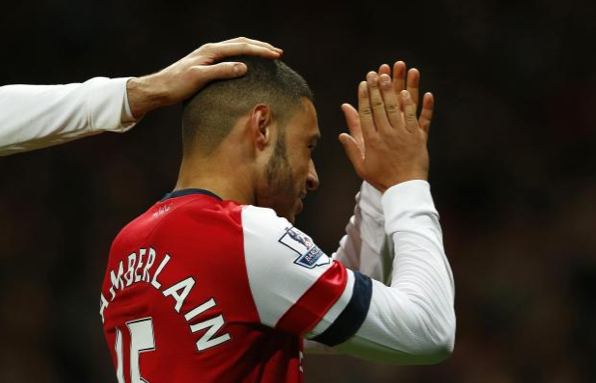 Speaking to Sky after the game, he told the reported, “It was really nice to get a start, and good to get a run out in midfield. It’s nice that the boss has faith in me in there. We knew if we kept up the tempo we’d get the chances, and we did.

“In the first half it was my duty to make more runs, but I didn’t really do that. I want to add more goals to my game so it’s nice to get them.

“It’s always an amazing feeling to score, especially at the Emirates, and it’s nice to help the team.”

Asked about being deployed in an unfamiliar midfield role, he said, “It’s nice to play in midfield with the players we have. Mikel, Santi, Mesut. The main thing is the team though, we had to get three points, the defence did well, and Wojciech made some great saves.

“We’ve got a lot of hard fixtures coming up, so we’ll take it one step at a time. We’ll put this behind us, take the positives, and it’s nice to get the win.”

The Ox also showed his comedy stylings when asked by the Sky reporter if he’d be watching the ‘big game’ tomorrow night.

“Who’s playing?”, he asked, with all sincerity. Beautiful (see the Vine here).

“Everybody ought to have a chambo…”

Its really Nice that they picked Walcott his friend to media train the OX.

Great banter after the match. Took that first cool as you like — as if he bangs in 20 a season. Great game from him. Wenger knows best as usual starting him at CM.

remember the invincibles
Reply to  Sanjeev

we have too many goal-scoring midfielders. All of a sudden. What happens when Rambo, Chambo and Jack are all fit? I like t

Sanjeev
Reply to  remember the invincibles

Me too. They’ll all fight like hell for the spot.

Goals from midfield a must with this squad. Giroud can play provider/decoy if they’re willing to run into space behind him. And they are. All of them.

rohit
Reply to  remember the invincibles

Wilshere in his suit with a coat on sitting on the bench, not up in a nice warm suite. I fucking love this team

Have to say that coat he had on was absolutely top notch. wish we’d signed it.

perhaps we did, I’m wondering if Lanvin supply the coats too

thank you ox and team now i can face monday with a smile.

A pic of Ox and some players with his Man of the Match award.

Heroldgoon
Reply to  Too Drunk To Be Offside

Was Ozils smile the lighting for this photo?

Nice smile he has.

Too Drunk To Be Offside
Reply to  Heroldgoon

Also who is the jobless Spud on here, thumbing down every comment. Even the positive comments have 1 thump down.

Chairman Meow
Reply to  Too Drunk To Be Offside

I know its fucking pathetic

Heroldgoon
Reply to  Too Drunk To Be Offside

There’s bound to be some sick to the stomach sp*rs fans in here. Don’t know why though they shouldn’t be mad not with our DOWNWARD SPIRAL!

maybe heroldgoon? everbody got one except him..

The kid is class

Even a parked bus can’t handle being hit by an Ox. :p

Welcome back to The Big Ox. Oh how we have misse you. COYG!

Did he mention by any chance that it was nice? 🙂

Now our every midfielder has scored a goal. Unless I’m very much mistaken

He hasn’t been seen for a while….perhaps its more like Peek Abou?

I’d say that’s his best game for us so far.

Was a match-winning game from him today no doubt, but I think his performance in that position against AC Milan was unbelievable. It was also almost 2 years ago incredibly.

it would be good for football if we win the epl. Clubs are overspending but arsenal always spends what is generated yet plays better football. I know it’ll be tough but I’m optimistic. we love you ox!!!

i want to boff bendtner and I'm not even gay

Who’s this year’s Freddie? Is it the ox? It could be. This year is the year with the oxe!!!

Dunno, he was very good vs milan

Love this team. Everyone seems to have at least a goal or two in them. Would love to see Gnabry score a couple more himself.

Fantastic game by the ox, great pass by Cazorla to set up the first, and what a flick to get himself in for the 2nd…..

Very gud day on the job 2 all team an great thnks to the. OX, we ar arsenal the gunners keep believing we cn do it wen all gv as no chance keep up the gud work it’s not dan as yet. !!!

Reporter: A really big game tomorrow night as well. Will you watch that?
Alex: Who is playing?
hahhahaha

birdinggooner
Reply to  Jimmy B

They’re still out there, then… that’s really, er, NOT nice. They should take a look at most of the clubs who play manager russian roulette and where it gets them.

The Ox In the Box. Great job alex.Let’s keep this team spirit until the end of the season!Now bring on the Reds!COYG!

I wonder if the Ox has a liking for late 60s rock? He can start with “The Thoughts of Emmerlist Davjack” by ‘The Nice’ and perhaps move on to “Here Comes the Nice” by the Small Faces (though that might have too many druggy references for a clean-living sportsman).

I’m the only one in my mini league that transferred the Ox in during this window. Now that’s Nice!!

His interview compared to EVERY SINGLE WAYNE ROONEY interview was well nice.

I was sitting in the North Bank upper, as I usually do, and I’d like to thank the Palace fans. They were fantastic, singing the whole match and doing their team proud. They never gave up

Totally agree with you dc ,could bearly hear the commentaters during the match,right to the final whistle