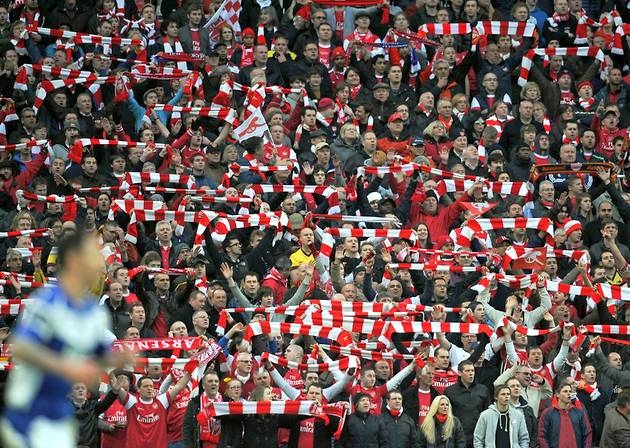 The BBC have confirmed that Arsenal will receive a bumper 42,882 ticket allocation for the FA Cup semi-final against Wigan Athletic.

The figure comes as a fillip to the club’s 42,000 season ticket holders who should as a consequence have no problem securing a ticket.

In the two previous trips to the new Wembley, the Chelsea FA Cup semi-final in 2009 and the Carling Cup final in 2011, some fans missed out due to the higher proportion of tickets taken by opposition support and those on corporate jollies.

Wigan’s allocation for the game on 12 April is 22,807 and has been agreed based on their supporter attendance at this season’s Community Shield and last term’s Wembley outings.

In Sunday’s semi-final sees a more even split in ticket numbers with Hull receiving 32,011 tickets and Sheffield United 31,796.

Will red members get any chance at all?

Its a valid point. Since we started doing well this season getting hold of tickets as a red member hasnt been so easy unless they are on the ticket exchange.

I need to start setting reminders so i can remember to book one of the 3,500 tickets at 6am the day they are released to red members.

Oh yeah we dont get a look in on the wembly tickets
http://www.arsenal.com/match/report/1314/tickets/first-team/semi-final-v-arsenal-ticket-info

Think I’m going to have to buy a ticket in the wigan end, they go on general sale on the 26th.

You’d like to think they’d set aside maybe 250 for red members just to give those fans that can’t make it to every game a chance, but do they fuck. Incidentally, if they make it to the final i’ve been offered tickets, via corporate avenues, but get this €500 a ticket. thieving bastards.

the divine ponytail
Reply to  MaliceMajorE15

its clearly fair that fans that attend away games get priority

It is time to make some memories at the new Wembley.

I’ve GOT THE TOP COMMENT.
I’d like to thank all the background staff who made this achievement possible.
I’d also like to thank my trainer, and nutritionist, and my family.

It was a struggle, but worth it in the end.

continue with your struggle

Thank GOD. I was so nervous that even as a season ticket holder I wouldn’t be able to go. 1st world problems and all that I know but now I’m worried about the final should we make it!

The Ox is a fox
Reply to  JP

The cup is already in the bag.

Hopefully, it’s not a rubbish bag that we put the cup into!

Damn it im on holiday for the semi.

I’m on holiday with a semi

we’ll be at home!

Shouldn’t you be getting lots of semis on holiday? Or are you taking the wife?

Mills (the other one)
Reply to  Me So Hornsey

Pity it didn’t match off against the original message, but still comment of the day for me …

Bendtner will never play for us again. It’s a shame what he did to him self but it will be a nice gesture sending a player back to ligue 2.

What a missed opportunity.

I’m way out here in Malaysia and was thinking of getting a ticket for the semi-final. Is it as impossible as it sounds in here? Anyone has any suggestions of how I might be able to get 1?

You’ll only get one via the corporates, but they’ll charge a significant premium, You;d be looking at a minimum €350-400.

Club website says they will first be available to Away Scheme members, then Season Ticket holders a few days later, so still some season ticket holders may be unlucky.

What about the ten thousand spuds who have now converted/upgraded to Wigan?

As a Junior Gunner, will I have a chance of getting a ticket?

I can’t be there myself, but I still consider this great news. Getting tickets for semi finals and finals is generally a pain in the ass.

With over 42,000 Gooners that will be more bums on seats than we get at some “sold out” home matches!!

You clearly don’t go to any home games.

I haven’t missed a home game in years mate. But when you take off the away fans and the empty seats, mainly on Club Level, I’m not far off.

It was also a fair point for a fortnight’s time when we’ll be faced with a large number of real fans who won’t be able to get a seat at Wembley when the corporate suits take up their option for a “big match”.

I take your point, to an extent. Club level capacity is 7000 but it’s always at least 75% full, and away support is typically 3000, so leaves about 52,000 for gooners. Yes there’s always empty seats, but not 10,000.
Worst i’ve seen was about 4 years ago, cup match against Blackburn, we’d only just beaten Bolton – in a replay I think – a few days before so the tickets couldn’t be sold quickly enough using traditional avenues, I reckon only about 35,000 attendance at that one (total).

Guyz don’t let us down… Win that game!

What’s the chances of Silver getting a looking in?

Mike ‘Spud’ Dean will be reffing the NLD:

It will only make the victory that much sweeter.

As much as Wigan won the cup last year, their fans sure as hell can’t win anything for punctuation.

Musgrove: “I cant sir Ive never heard of commas apostrophes and ultimately full stops so all I can do is churn bollocks”

Time to clean the dust from our cabinets. The good times are back. Now get me that FA cup trophy you Rampaging Gunners!

Golden oppurtunity for some silver, and i hope we dont fock it up.

Murphy plz stay at home for this one. Dont need anything to go wrong now.

To be fair we’ve got about 10000 more tickets than usual, so that’s a plus, but given that we’ve got 42k season ticket holders plus the members of the away season ticket thing (if that still runs?), As a red member I have to disagree with those complaining, I think it’s totally reasonable we don’t get a look in, how could they justify that to the people who commit to going to every home and / or away game at a cost of probably at least a couple of grand? Being the semi you may find some can’t make it… Read more »

The away ticket scheme does still run (I’m a member) but you have to be a season ticket holder to join it, so you can just use the 42k season ticket number for the math. Being on the away scheme means you effectively have a Season Ticket both home & away which is why you get first dibs at the”rare” fixtures. As I work a 60hr week & scrimp to afford every match, I think that’s fair. It will go down to Silver at least so some non-ST members will get a chance but, as you say, Red members are… Read more »

Can you hear the Wigan sing? No..No..