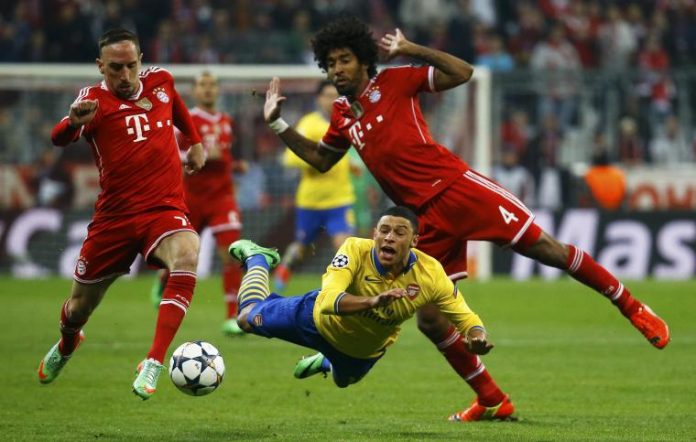 Arsene Wenger has revealed that Alex Oxlade-Chamberlain is facing a race against time if he’s to be involved in the FA Cup final.

The England midfielder wasn’t part of the matchday squad for the win over Newcastle United last night with the boss revealing the 20-year-old has strained his groin and will be rested for a full two weeks.

“He [Oxlade-Chamberlain] has an inflammation of his groin,” told press last night.

“He couldn’t practise. I put him on Friday on the team sheet and played him when he was needed, but it came to a point where it didn’t progress. We decided to give him a complete rest for two weeks. Will he be involved with me? I think he has a chance. But will he be ready for England? I think so.”

Injured on the first day of the season against Aston Villa, Chamberlain has endured a frustrating season making only 12 starts in all competitions and only 20 appearances in total.

Having announced himself on the international stage with a stunning volley against Brazil last summer he was tipped for big things this year only for knee ligament damage to keep him out until January. He looked sharp against Bayern Munich at the Allianz Arena in March but having been pressed into action against Wigan Athletic (when obviously not fully fit) his body again seems to be suffering. Fingers crossed he’s back soon and fit enough to be selected for England.

He’s not the only one of Roy Hodgson’s young charges racing the clock. Jack Wilshere is facing the same battle to get up to speed, although the boss did confirm last night that the 22-year-old is back in training.

You suspect if we beat West Brom on Sunday he may well get himself 30 minutes against Norwich on the last day of the season.

His energy was the reason we progressed in the semi.

Lets all hope Ox and Wilshire dont go to Brazil. Lets face it we aint going to win and i want my players fit and fresh for the new season.

Maybe, but I wonder if that may have some psychological impact, and give the media something else to criticise us about.

While i do get your pointe I don’t agree. I think it will do both of them a lot of good to get the experince. An they haven’t played a lot this season so I think they should be up for it..

Gutted for the Ox. Rest and recuperation has not been our injured players friends this season. What’s happened to Gnabry? Is he injured?

Will Gnabry be fit in time for the final?

Hope he makes it in time for the final. He really deserves a medal, and to get it on the day.

By the way, is it just my warped mind, or does ‘an inflammation of the groin’ sound like anything but an injury, especially as a Wengeresque euphemism.

Couldn’t read the next paragraph with a straight face.

I’ll get me coat.

“Inflammation of the groin”. It’s those damn supplements, I tell you! Damn you supplements! Damn you!

If you’re still having problems after 4 hours, you should see a doctor.

We need more depth having to rush players back after lengthy spells out is not the best is it…..

A Yank
Reply to  Jstin

We have plenty of depth at midfield: Ox, Wilshere, Arteta, Özil, Flamini, Walcott, Santi, Rosicky, Ramsey, Podolski (okay technically a forward, but we play him out on the left like an advanced midfielder), Gnabry… the problem was that 2/3 of them were out injured at the same time.

Injuries have been a problem for the past, what, six seasons? Just hope Wenger changes his alarm clock so it no longer wakes him to the sounds of “I Got You Babe”.

Rufusstan
Reply to  A Yank

I don’t think our injury problems will stop until external attitudes are changed. While opposition teams see ‘putting a foot in’ as the only way to compete, then we will have to deal with disproportionate amounts of physical challenges. When refs wave away blatant fouls on Arsenal players every game, opposition teams will continue fouling them. When commentators keep calling potential leg-breakers ‘strong but fair challenges’, attitudes to them will not change. …..and we will continue having disproportionately large numbers of injuries. It happens everywhere, but against us, ‘rough them up’ is a primary strategy. I’m OK with that, if… Read more »

Well personally I hope they are both fit and go to the world cup. How could you want to deny a player that honour of pulling on a three lions shirt.
Just pray the dont get injured.

Hopefully next year we will have a bigger squad filled with more quality players that can share the load and we can see the team finally fulfill its fucking potential.

Who cares about England, I want him for the FA cup final! We all know what happens to our players when they play for their national team…*cough thanks agger cough*

How old is this boy? Giroud can point him in the right direction for groin inflammation.

The football, the groin! It works on so many levels!

“… inflammation of his groin…” *titter*

In seriousness though. Crapweasels!!!

Get well soon OX. Watching from the stands last night it was obvious we really missed your pace and directness. You have 2 weeks to sort yourself out, and get your groin back to normal size.

Hull cant play jelavic and long, so ox’s absence wont be a big concern. But, yes its always nice to see him charging like an ox through the middle. Hope hull wont park the bus.

Will be absolutely gutted for Alex if he’s not lifting the trophy at Wembley. Especially after his motm performance against Wigan.

Hope he makes it as it would be terrible bad luck for our man of the match in the semi final!

Ox would be exciting at the WC. i remember watching the England qualifiers soley because he was on the pitch,moreover with Walcott out it should be perfect for him.

first things fast though, get fit for F.A cup then we will pick it up from there.

I agree and cannot believe why so many thumbs up for our lads to miss out on the greatest footballing event in the home of sexy carnival football. I.amagine how lifted Jack would be to play a part in it. I cursed the friendly game that Jack got injured and disagree with Blogs entirely that it was a fair challenge. I doubt the mugwasher would of gone in half so hard had it been Sterling. I think with Ox, Jack and Lalana in the line up we are strong with Shrek and Sturridge up front and Gerrard as DM despite… Read more »

Ozil and Ramsey in, The Ox out.

Well at least the “players in/players out ratio” has improved somewhat.

“He has an inflammation of his groin,”

a side effect of Giroud’s ‘blue pill’ parties?

I know this is completely irrelevant to the article, but just hear me out. If Manchester City does end up beating Everton on Saturday, doesn’t that guarantee us fourth spot? And if that’s the case, do you think that Wenger should field a squad full of youngsters? Not only would this be a great chance for them to prove themselves, but it would give us an opportunity to rest players for the cup final