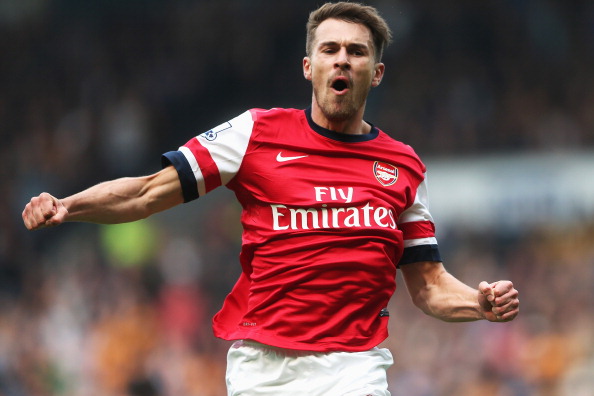 After scoring the winner in the FA Cup final against Hull in May, Aaron Ramsey has his sights set on more Wembley glory this weekend.

The Gunners face Premier League winners Man City in the traditional season opener, and the Welsh Jesus is looking to enjoy another day out in the famous old stadium.

“It was definitely a great feeling winning the FA Cup,” he said, “and we want that feeling again as quickly as possible.

“We want to try and win things this year and we believe we have a great opportunity of doing that.

“We always felt we were heading in the right direction. We had a lot of changes over the years with big players leaving for other clubs but we are a settled team, one where everyone gets on with each other and enjoys each other’s company.

“I think you can see that on the pitch.”

Having had the best season of his life (despite the fact he missed a big chunk of it through injury), Ramsey is also ready to push on again in the new campaign.

“I can still improve defensively and obviously I want to improve on the goals that I scored last season. I feel there is still a lot more to come.”

No resting on his laurels, fingers crossed he can do it because the idea of an even better Ramsey is a very exciting one indeed.

So excited to see us smash Citeh!!

Not sure if anyone saw, Sky are saying United have withdrawn interest in TV5. Excellent news! Off the Barça it is!

I’d love Aaron to have an amazing season again and his improvement is huge but let’s not start shouting “one season wonder” if he doesn’t score right away in August. He is going to be super marked every match this time around.

It is hard to mark him as he is coming in from deep positions. In order to disrupt Arsenal it is far easier to try locking down Ozil with a DM or Arteta with your forward.

Doesn’t matter if he’s super marked, that’ll give more space to the likes of Alexis and Santi and we all know these guys have an eye for goal too ! Quality everywhere… ahh, good days to be a gooner.

looking forward to Sunday, it’s a no-lose scenario, if we win – brilliant! but if we lose then it’s fine as we can mentally trade a meaningless loss against three points in the league in the manner of superstitious fans everywhere

i’m sure sagna will get a warm round of applause from all us gooners lucky enough to be at wembley, but whoever is occupying our right back position will get a bigger cheer…

Alexperson
Reply to  the only sam is nelson

Haha, that’s definitely what I do when we lose.

Yeah….they will double mark Ramsey to leave room for Sanchez, Walcott and Ozil……..(faints)!

Exactly. There are only so many players you can double mark, and the way we’re collecting/developing superstars there will always be room for one of the others.

Go on Rambo, give them a taste of what they are in for this season.

Reloading the cannon I see…

I think it’s fucking mental that he matched Yaya Touré (arguably the best midfielder in the league over the last few years)’s stats after spending half the season injured.

More of the same and less injuries, through the great Shad we pray in the name of Welsh Jesus.

Actually he was better than Touré last year.

I chose 17 categories to compare Ramsey and Toure which seemed relevant (don’t ask why), and Ramsey won 11. But somehow Toure managed a higher overall score.

Actually, it’s worse for Toure, because those Squawka stats include penalties in the ‘Goals Scored’ stat, so it isn’t actually a fair comparison, because Toure scored quite a few penalties last season. I can never find a website that gives ‘non-penalty goals scored’, if that stat was included, I think their scoring would be more even.

I think you can do better with the choice of stats; from the important you are missing clearances, tackles lost (to see the tackle % success), fouls committed and suffered. On the other hand, ‘total score’ is complete bs, and, personally, I care very little about shot accuracy – if you are scoring one in five say, I couldn’t care less if the other four are on target or not.

I didn’t include clearances because what does it really say? That a player cleared the ball a lot? Er, ok? Not that important a stat don’t you think, compared to tackles and interceptions?
Ramsey makes three times more tackles than Toure, so is tackles lost important?
And fouls isn’t exactly an important stat, at least you hardly ever see it in an anlysis.
But mainly I didn’t choose them because I already had 17 categories. I might as well have chosen all the categories if you think I was still missing some.

Praises be to the Welsh Jesus for he has come to deliver us goals and joy over the oil-rich non-believers!

Followed by a sinking feeling that leaving us now might have been a bad idea.
COYG!