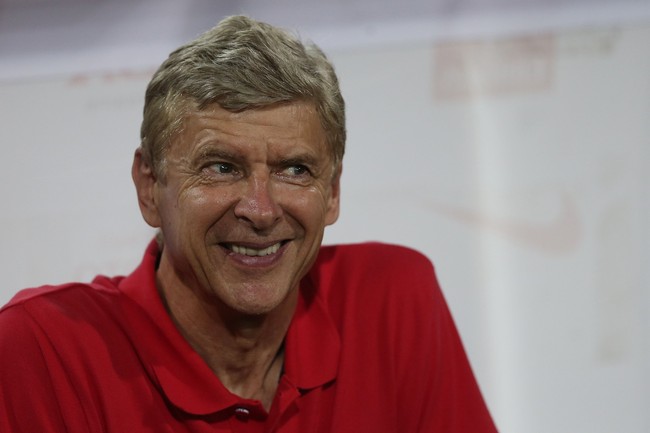 Although he’s been silent on the subject of the Danny Welbeck signing, Arsene Wenger has finally gone public about his deadline day capture.

Having been away in Rome, bringing about World Peace, and at a manager’s convention in Geneva where he had to stop Jose Mourinho from giving Brendan Rodgers a hyper-wedgie, the Arsenal manager took time out of his day to speak exclusively to Arseblog News.

“Sometimes I feel I live an almost futile existence,” he said. “I look up at night, and the diamond brilliance of the stars on that blue velvet sky makes me realise just how small I am in the grand scheme of things.

“How did it come to pass that 11 men kicking a football becomes the centre of the universe for so many? It puts me in mind of Baudelaire when he said ‘The insatiable thirst for everything which lies beyond, and which life reveals, is the most living proof of our immortality.’

“What we do, and how we do it, lives on through the ages. Our actions, our creations, our progeny, they are all echoes of ourselves that travel through history and time.

“A little piece of each of us will live on, somehow. Great men will have statues, but even the man who works at the shipyard or digging into this great earth for fuel, plays his part in the wonder of what we call life.

“When we all give the power, we all give the best. Every minute of an hour, don’t think about a rest. And that is life to me. It matters not if we think so little of ourselves to ignore what is right in front of us.”

Wenger grew wistful then, as he continued.

“It makes me sad that we fail to see the beauty in one another, choosing to divide and fight over abstract constructs which cause so much hurt and misery throughout the world. I am a man who will fight for your honour.

“If only people would unite more readily. In this advanced civilisation we live in, with such technology, how is it that we’re still so far from what Phil Oakey dreamt of back in 1984? Until we can live together, together in electric dreams, then I fear for our future.

“Oh, and I signed Danny Welbeck.”

It says so right in the second paragraph:
“the Arsenal manager took time out of his day to speak exclusively to Arseblog News.”

I’m sorry but having watched the standards of journalism from this institution fall, I’ve reached the point where I must now publicly voice my displeasure with the what passes for content these days.

I shall be writing to the accounting offices to request my yearly subscription sent back.

Does make me wonder though because usually there are the grinning pics of AW and new signing holding up a shirt and other such nonsense but this time…..nothing …weird. Maybe Arsene doesn’t know yet, maybe the board decided to get him a surprise present for when he gets back. Look Arsene a striker! “Oh just what I always wanted thanks you guys”

You want fries with that?

Fuck blogs, I was genuinely excited to see what he said about Welbz lol.

Dude, I actually thought it was genuine until I read your comment. I feel like the most gullible idiot alive lol.

Actually, it is the kind of the thing which Arsene might say; probably, he could be the only one in the world of football managers who could be saying these words. 🙂

The only words out of that speech that Tony Pulis could possibly understand are “the”, “it”, and “of”. And I’m not too sure about “it”.

The interlull is so very boring.

Not only that but, I am suffering PL and specifically arsenal FC withdrawal symptoms…. Help!…

Is tonight the last night of the interlull? So we’ve just got Wales and Chile (admittedly bad) and a couple of under-21s with players at injury risk?

Ssssshhhhhhhhhhh…….do not speak of the remaining international matches involving AFC players until AFTER they have made it thru unscathed

You’re right, I should have kept my mouth shout. Ramsey’s limped off. Ankle.

GoonerGary
Reply to  The Only Olivier is Giroud

hahaha, should’ve known when I saw that picture.

PMSFL so this is Pedro’s attempt by claiming he spoke to Wenger hahahahaha, the same guy who believes he lunches with Gazidis – Welbeck was a board signing end of deal with it!! wenger was on his way to Rome and was in Rome refereeing a charity football tournament organised by the pope

Do you hear that whistling noise? It’s the joke going right over your head.

Am I the only one who wasted 1 minute and 10 seconds here??

Two minutes, because you wrote this comment too.
But it made me laugh, and that is priceless; good 2 minutes invested for me.

Obviously not, considering the time of the post and the amount of comments.

Easy with the wild mushrooms, Blogs.

In the difficult times when one cannot rely on media, sometimes pushing their agendas through outright lies, it is priceless that the Arseblog, the last fortress of honest journalism, stands it’s ground as strong as ever.

Blogs and Hound, well done for bringing us yet another valuable piece in extremely timely and precise manner. Well done and cheers!

are they really his words? how poetic and philosophical, he deserves noble

Now that was truely profound.

Son of a bitch stole my ideas….

Did you have ideas first ?

I actually want to hear Wenger say this. And how he pronounces Phil Oakey.

Still a more believable article than that from the Sun, Metro, Daily Mail, etc.

Liked the Baudelaire quote, but can’t help wishing he would say something about Welbeck.

He did – last line of the article

Baudelaire did? Excellent, especially if he thinks it would be a waste to play Welbeck on the left.

You been at the jimsun weed again?

That was unnecessary tbh…

Sigh. The presence of greatness.

I give it twenty minutes before the Daily Heil picks up those quotes and publishes them!

We need to contact the Vatican, just saying. Or issue an Interpol ‘Coach Missing’ bulletin.

Can I get a little help with the song titles and artists .. Can’t work them all out

(thanks Blogs – I now see how I should reply to any article).

These qoutes would have been out by 3rd September if not for wenger’s dithering..

The story was under a strict embargo until Welbeck scored twice for England.

Has me met him?

If Football was to become extinct Arseblog would be sent to a mental institution.

The African Panther
Reply to  BeeBrian

Or he would move to the base of the Alps where he would then spent each of his day in a nearby tavern.

They’d be full up mate…

Football can’t become extinct because it isnt an organism or species.

but if it did can John terry and mourinho be hunted into extinction… by arseblog readers, maybe as a readers prize

“When we all give the power, we all give the best. Every minute of an hour, don’t think about a rest. And that is life to me. It matters not if we think so little of ourselves to ignore what is right in front of us.”

And with that the Master Manager leaned back in his chair, crossed his fingers and with a deeply contemplative look on his face he blasted his favourite tune by his favourite band.

That’s certainly a unique interpretation of that song

I was actually hoping for some interesting coments about Welbeck..

Was so excited but fcuk!!
Actually you made me look like a fool:D

Acutally I think you’re doing a fine job of that all by yourself.

Let me ask differently. Does Arsene know we signed Welbeck ? 🙂

ItsWilshere'sSeasonBitches
Reply to  Nationality ? a Gunner

Hahah Fine, you got me so bad with that headline.

I was excited initially, but it all faded away as I was reading hoping to see the gaffer speak about Welbz to no avail. You owe me, Blogz!

you owe yourself a sense of humour

strange what an interlull can do to you!!!

I am actually thoroughly baffled by the fact that Wenger has yet to talk about Welbeck at all. Every new signing is accompanied by a few Wenger quotes on the Arsenal website where he goes on about what a good signing it is. Is he really so hard to get in touch with right now? No e-mails, phones, fax machines, smoke signals, nothing? How about a post card from Rome? No? A small message flown by a pigeon then? Letter delivery via drones? And the list goes on and on. There are quite a few ways to communicate! It’s not… Read more »

i think people are suffering under the misapprehension that when Wenger (or any manager) is quoted, that they have run out into the street crying ‘is there a journalist about, I have something to say’. But, actually even the arch-villain jose probably just waits till the pre-game press conference. Given that we are in an interlull and all the journalist were busy writing obits for Woy, which they then have to rub out (does crayon even rub out) and rewrite, then we will have to wait till Friday to hear about Welbeck and why we didn’t sign that centre-half stroke… Read more »

Nope, not buying it….over a week later & no comment is weird no matter what way you spin it

This is generally the case when it comes to injuries and what not, but not new signings. Big signings are always a major event, followed by photo shoots and manager quotes. This is our 3rd biggest signing ever, it’s not a “oh and by the way, we signed some guy” kind of thing.

At any rate, I’m not worried by it or anything, I just find it a bit strange.

He said so much about Welbeck there. I’m sure he has a lot more to say for not buying a CB.

damn I did believe it for few seconds…

“spoke exclusively to arseblog” was the give away

I was expecting at least a reference to French author-provocateur Houllebecq.

Andrew, give me 2.5 reasons why I should forgive you for this.

I will accept the .5 reason.

Photos signed by parents and grandparents as well as the queen, or it didn’t happen…..

C’mon bro…you write well but this sucks…anything to get clicks and hits and increase your page views, huh?! Downer!

I will refund your annual subscription fee as soon as I get a moment.