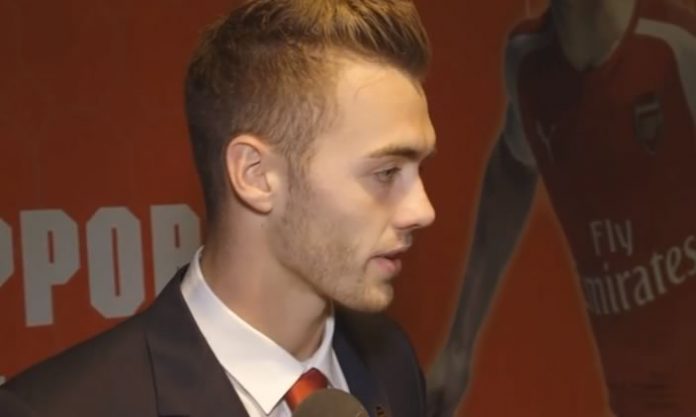 Calum Chambers has been called up to the England squad for the upcoming games against San Marino and Estonia.

The youngster had been named in Gareth Southgates Under 21 squad, but after Everton’s John Stones picked up an ankle injury today, Chambers was given the nod by Roy Hodgson to join the seniors.

He’ll travel to  St George’s Park on Monday for the initial training sessions before they play San Marino at Wembley on Thursday, before a trip to Estonia for the game on Sunday 12th October.

Chambers also picked up his 5th booking of the season against Chelsea and is now suspended for Arsenal’s next game against Hull on Ocotber 18th.

Auch that’s rubbish! I’m over for the Hull match and was hoping to see Chambers. Suppose it will be good for him to have a rest after his heavy involvement so far.

Think he got his 5th booking of the season and will miss that game. I’m sure you’ll enjoy watching bellerin!

I thought that harsh yellow kinda slowed and restricted him, i remember shouting at him to get away from hazard when he forced him towards the middle, was scared he might get a second yellow. Funny enough though i was shouting at the tv screen! Lol!

One of the signings of the season so far!!!

definitely one of the top 5 signings we made this summer!

I am still depressed.

I hate Mourinho, and i hate losing, we better smash them at the Emirates.

Totally deserved the kid has been a revelation.

However, slightly concerned that he’s barely had 3 days rest since pre-season.

this aint FIFA bitches
Reply to  Me So Hornsey

More concerning is that he has picked up 5 bookings in only 7 games.

But no sending offs – Which means he knows how to walk the defensive tightrope. It is like Flam who gets 1 a game too but we’re fine with that. Personally I think Chambers has been amazing since joining us.
As for Hull lets see what Bellerin can do. Kid has a lot of potential.

And i think Chambers deserves his call up, he has been an excellent.

But what i would love to see, when Debuchy gets back, is Wenger giving Chambers the DM role. I think he could play that perfectly. Because when he is in front of the oppositions attack, he is hard to get passed, and he has a great touch, and that ball he played to Özil today was brilliant. And we seen already he likes the odd shot. Wherever he eventually settles at, he has a very bright future.

Signing* is supposed to be after excellent.

We need an edit button Arseblog 😉

After everything, i look at the team and i realise we have sanchez and i’m just fine! Can’t wait to see a front four of ..
……………..danny………….,
feo – ozil – alexis,
and wenger chooses to play on the counter against the big sides. I really miss feo, our big game player!

am i the only one who regrets buying Ozil? we could of had our beloved Cesc by now! i don’t think Cesc is necessarily a better player than Ozil but it’s just the fact that Fabregas is (or should i say was) Arsenal through and through and grew up in the club, unlike Ozil who was a ready made star who we had to pay for 42m like other plastic clubs do. seeing Fabregas produce that pass to Costa while Ozil doing shit today doesn’t make it easier either. it really isn’t about the quality of the 2, just the… Read more »

I also thought seeing Cesc playing against us for Chelsea would hurt, as Blogs wrote in his Guardian piece. It didn’t.

Fergie the Gooner
Reply to  Crew

Ozil had 2 great games coming into this, so let’s go easy on him. Yes he was poor on Sunday, but we need to give him our support not a kicking.

Crew
Reply to  Fergie the Gooner

it’s not about quality. Ozil is a fantastic player no doubt. it’s just my personal preference that we have as many players who are developed and minimum players bought. he’s a great player, but i don’t like the fact that we need to buy quality to compete. especially when we have the home grown Ramsey and Wilshere + Santi and Rosicky to play there. Debuchy on the other hand was a must buy.

And what are the odds he comes back injured? Yes, I’m always this pessimistic and cynical after losing to the scum.

Calum Chambers is the only player who brings some kind of positive to this mediocre start of the season. And he doesn’t even play the next match…

John Terry is a thundercunt.

IMO its going to be really great to watch bellerin hes a definite candidate for that RB spot in the future and against a team like Hull he’s get to perhaps showcase his skills a bit more that say against Dortmund in the CL can’t wait!!

The more he plays, the more I’m convinced he may be the real deal.

He’s terrific for someone so inexperienced at the highest level. But even than wasn’t good enough to stop Hazard and co. destroying us at the Bridge yesterday.

Damn you Wenger, I wish you’d bought better in the Transfer Market.

Chambers should play centrally , either right sided centre half in place of BFG or CDM in place of Flamini. He is that good and the best signing of the last few years.

I think Chambers is really taking this “future DM” idea to heart. After all, why else would he be trying to emulate Flamini with all these cards?