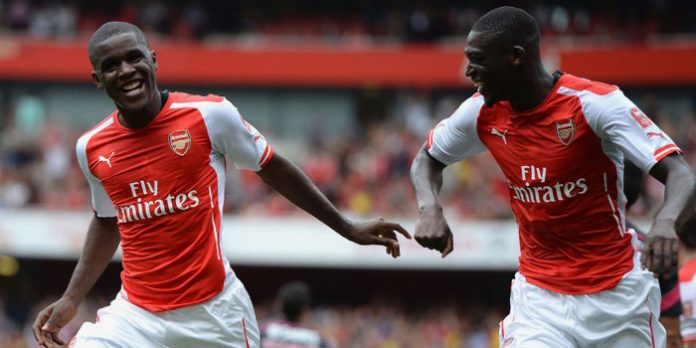 In Greek lore, the Siren were enchanting creatures who lured seamen to shore with their ample bosoms, beautiful song and captivating voices in order for them to shipwreck on the rocks.

While Steve Bruce may indeed share some of the chesty qualities of these mythological beings, it’s hard to imagine his singing voice being quite as beautiful.

Nevertheless, he is doing his best to lure Yaya Sanogo to Hull City on loan. Yesterday, Arsene Wenger confirmed The Tigers were one of the clubs interested in the young French striker, and Bruce backed that up by singing (aha!) the praises of the former Auxerre man.

“I don’t know how many starts he’s had,” he said, “but he played against us in the cup final and I was very impressed with him. I saw him play for Arsenal against Dortmund in the Champions League as well.

“For the French under-21s he’s been nothing short of fantastic. I saw a game when they beat England and I thought he was terrific.

“When you take a young boy, especially a striker, it’s a question of whether they can come and do it. I took Nicklas Bendtner when he was 18 and he won me the Championship.”

Bruce was backed by hefty midfielder Tom Huddlestone who said, “I was speaking to a couple of the lads yesterday when we heard the rumour and they were saying he’s a handful.

“He’s an intelligent footballer for one so young. The times I’ve seen him at Arsenal, I think he’s done very well.

“He’s been a bit unlucky at Arsenal in front of goal and at the highest level, which Arsenal is, you probably need to be a bit more clinical but football-wise he’s done well. He’s impressed me.”

It does look as if something’s going to happen sooner rather than later, but Hull face competition from Crystal Palace whose managerlessness might be an issue.

I can’t work out if the Crystal Palace ‘managerless’ comment is a joke or a mistake… Pretty funny either way ha.

Palace are managed by Pardrew now.

I liked Bruce until he complained in the fa cup final about the first goal wasn’t a foul. He didn’t talk about the 4 pens we should of had.

Now I will go to eat.

He didn’t talk about them moving their free kick 20 yards forward for their first goal either.

Don’t forget to drink too.

Alcohol is for peasents. I prefer to dine with orc blood

“Rar rar rar were going to smash the orcs” (young ones)

Hope he goes there and score a couple o’ goals against our rivals to help us in our race for top 4.

Palace are managerless. That is a 100% correct statement…..just like Newcastle were managerless before them….

They make good points. IMO everytime hes played hes done OK. He holds it up well, links up well with midfield and brings them into play. The only thing that is missing is goals. But his record proves he knows where the net it. Im hoping he has a lot of football between now and end of season and comes back with more confidence. I personally believe in his potential. COYG

Agree with all of that

If we want Sanogo to learn about eating multiple sandwiches and defending for 89 minutes we’ll send him to Hull, if he wants to learn and play football, somewhere else maybe

I’d be surprised if Sanogo started ahead of Jelavic and Hernandez. They aren’t amazing, but they are established internationals.

Both got injured playing yesterday

I have a feeling this Sanogo saga is gonna have more twists and turns than Steve Bruce’s nose by the time we hit the finish line.

He does have potential in football manager, doesn’t he? Steve Bruce?

Here’s hoping Steve Bruce can turn him into a fighter like Robert the Bruce.

I will eat now too.

Remember there used to be a time when Sanogo didn’t score for us, feels like a lifetime ago…… Le Coq jokes are much funnier than Sanogoal jokes, he finally rose to the occasion

Sanogoal jokes still works perfect, he is as ineffective as Nicklas Bendtner.

Which team are you a striker for?

Nick b scored more goals for arsenal than kanu in similar no. of games