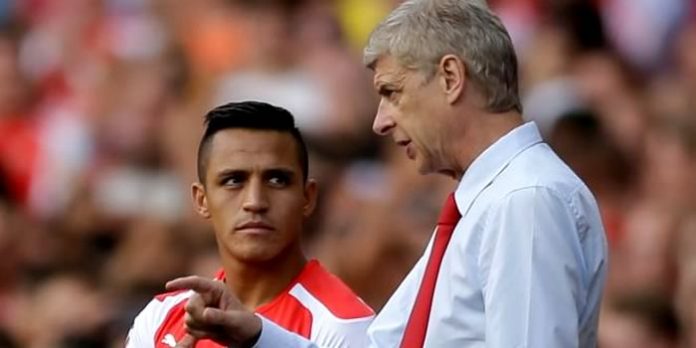 We’ve all seen pictures of players who arrive at a club where they clearly don’t want to be.

But Arsenal have had no such issues with Alexis Sanchez. Since his £30m arrival from Barcelona, the Chilean has been a driving force in the the Gunners team, despite the fact he’s had to get used to a new club, a new language, culture, weather and everything else.

Speaking to the official site, Arsene Wenger says this is because despite all the options he had in the summer, Arsenal was the place he really wanted to be, and as well as that the culture of the club from a football and personnel point of view played a big role in how quickly he settled.

“Alexis had a few options and he chose us because he felt that’s where he wanted to go,” he said. “Sometimes a player moves somewhere and it’s not the choice that he deeply wanted.

“In his case, I think he really wanted to join us. After, another step is that a team welcomes you with the values that you rate, and that in some parts of the team, you can feel at home when you need it sometimes.

“That means there are people inside the squad with a similar culture. For example we have plenty of Spanish-speaking people and I believe that helps to integrate people well.”

The other thing to consider is that Alexis is just goddam awesome, which is always a help.

What a top lad. So grateful he chose us..

Remember a rival club, though they even had an edge in the negotiations, claimed it was the choice of London over their city that saw Alexis sign for Arsenal.
Alexis quashed that face-saving lie in his first interview. He said that he chose us:
1. For the style of play which suits him better.
2. The chance to work with Arsene Wenger who impressed him when he analysed his game and showed him that he had been following his game from his native Chile.

Like Mesut Ozil, Wenger uses his knowledge about the players, shows them how they can improve even better and most importantly, they know that the Club will value them. I am sooo proud of to be a fun of the Arsenal and glad that some footballers appreciate that!
COYG! Bring on the red chitting devils!

and some people want WENGER out…. pffff

This is exactly what Arsenal means to me. It’s not just about employing a footballer, it’s about making him part of a family. I’m so proud to support and be a member of this amazing club!

Yup. Its like the stories that have come out about many other signings.

Such as when Santi was signed, Arteta being assigned as his ‘buddy’ to help him adapt– even having him over for dinner until he got settled.

It even stretches down to the way the youth players are handled these days — Bellerin’s interview recently sounded almost like he was fostered out at first.

As they say: Class is permanent.

Alexis and any other talented footballer joining the club will be made more than welcome by the staff and fans of Arsenal FC no matter the colour of his skin or religious beliefs
Yes ,I am appalled at what happened on the Paris Metro yesterday!!

I think they’ll be disappointed after all these years when they find out what colour Drogba is.

Make sure Pogba knows that!

A Yank in King Arsene's West Stand
Reply to  Possession

As fervently as I agree with your sentiment, I had a guy behind me chanting “dirty fucking yiddos” during the NLD a couple years ago and the only reason he stopped with the chant is because I turned around and told him off. But I’m only one woman surrounded by a sea of silent permissiveness. He’d been chanting xenophobic epithets at our *own* players for ages. The guys I sit with reported him to the stewards, but he’s still there from time to time. Don’t doubt this happens elsewhere in the ground. I don’t think it’s nearly as pervasive with… Read more »

The squad seems really together now, all pushing to improve and be good.

Isn’t it good to have more money in Arsenal’s coffers to buy great players and more competition for places?

We have 25 spots for players to register in order to play them.. so having more players is useless if they cant play.

That video of Anelka though

Damn he looks miserable .If i hadnt known i would have guess it was from somebodys instagram titled
“First day in guantanamo”.

Couldn’t find Exhibit C video of Frimpong to Barnsley. Plus, these two players have things in common attitude wise.

Oh yeah, he looks sooo joyous, and Lennon looks like he is about to spew up. Stroll on… They should have joined The Arsenal….. oh wait Anelka did…. a moody restless man, but young at the time too…

Could you imagine he joined the racists in blue?

Be careful. We all hate Chelski (for me they rival the the Tottenham as most hated) but let’s not paint them all with the same brush. I’m certain those guys are just a disgusting minority.

Aye well said. Scummy cunts Chelski fans may be, but I’m sure they’re as horrified by those cretins’ behaviour as everyone else.

True but when a club backs a racist player then it does send out a wrong message to its fans. Doesn’t make it right for them to abuse others but clubs should be setting out precedents that racism is not acceptable.

This was the major reason why I was oppose to us buying Suarez. I don’t think its right that club should be associated with racists players. They should chuck them out asap.

Suarez has reiterated it many times that he is not a racist. The word ‘negro’ does not have as much negativity/insult associated with in Spanish (in Uruguay) as much as it in English.

Terry has also claimed many times not to be a racist and we all know he’s a lying cunt.

He would say that wouldn’t he.

He also said that he didn’t bite Chiellini, just “lost his balance” and his teeth “accidentally” hit Chiellini’s shoulder.

A minority, but a worryingly sized minority. I’ve reported people for racist and homophobic language at football and rugby. I urge all fans to do the same

Exhibit B had me laughing my arse out In class.. If only they knew why I was laughing…

Its easy to Integrate with Sanchez – after all, aint he great?

I can just imagine Arséne describing the signing of Sanchez or Özil… “He has settled in well because err… sometimes I believe it is not a question of football or the language, but one of culture. He has not only the culture, the quality and the sharpness, but as well he is just goddam awesome”.

Fair fucks for that Anelka video, it’s the music that makes it! 😀

leroy
Reply to  The Only Olivier is Giroud

it reminds me of ‘nothing from nothing’ by billy preston.

Completely off-topic: Fantastic (in a bad way) to read Phil Neville’s commentary on BBC live text for PSG-Chelsea yesterday. Phil’s conclusion: Chelsea will be “happy with a point”. Sure, that really helps them on the CL last 16 league table…

I’m sure they’re quite happy. Now Mou can park the bus & scoring is of secondary importance. Always good Mourinhoball.

I think YOU missed the joke. The point being made here was about Phil Neville’s moment of cluelessness….yammering away about Chelsea getting “a point” in what was s’posed to be a knockout tie. Last I checked,thought those two-legged Champions League knockout thingies were sorted by goal aggregates…..

I love the camaraderie in the side now. It might have looked like we were shipping our best players a few years ago, but every single one of them had attitude problems and more than likely acted like twats in the dressing room. Song, Van Persie, Fabs, Samir, good riddance.

The Chelsea fans are some of the dumbest I have met. I was on a flight from Valencia to London and a load of them were singing antisemitic chants. I then pointed out the irony as at the time they had 3 Jewish players, a Jewish manager and a Jewish owner. They then turned on me as I am american and I just laughed in their unemployed faces.

I guess that shows it’s so easy to hate Chelsea that if they stop concentrating they accidently hate themselves.

Spot on, I hate them even slightly more than Man Ure (yes it is possible), ever since Moremoanio returned….. I could go on….

Lennon should be cracking a huge grin for leaving the hot turds.

We are brilliant, welcoming players from all over the world and combatting racism unlike some clubs. So isn’t it about time we got rid of the “Yiddo” rubbish once and for all.

We owe Wenger a lot for signing such a player, but in turn he owes the fans for standing by him through some difficult years.

In short, thank you for delivering Alexis and Özil, Prof!

Player motivation is high on the list for Wenger when bringing a player into the club. He is also more than likely to let a player go if the player is not fully committed to our cause (See Nasri for example) In the case of Alexis, he also benefits from the fact that Wenger has a laissez faire approach to the game in which the players are given maximum freedom within a interpretive framework to express their football. Ozil has had a slightly harder time adjusting because he is more used to the slightly more rigid systems with Germany and… Read more »

Could you elaborate on that?

Another interesting development little attention has been paid to is how monochromatic the team is in terms of composition these days. Where we are hodge podge of nationalities not long ago, the current squad is dominated by 4 nationalities – The British core (Ox, Walcott, Welbeck, Ramsey, Jack, Gibbs, Chambers) French steel ( Giroud, Coquelin, Flamini, Debuchy, Koscielny) German efficiency (Per, Ozil, Gnabry/Zelalem) Spanish flare (Santi, Monreal, Bellerin) South/Central Americans include Martinez, Alexis, Ospina, Campbell (who have affinity to the Spaniards in language) Gabriel of course is a Portugese speaker but at very least part of the South American stable.… Read more »

1. Tottenham make it into the CL ahead of Man U and the implications it then has on the laters Adidas sponsorship deal.

2. Man U make it into the CL ahead of Tottenham and the joy I would feel in seeing them fail again for another season.

Obviously I wouldn’t like either of them to make it through but a little 1=thumb up and 2=thumb down would be interesting to see.

Now let’s get that winning run back on track! COYG!!

Rufusstan
Reply to  Alexis of Evil

Southampton to finish 4th and leave both the Bastards in the Thursday night cup.