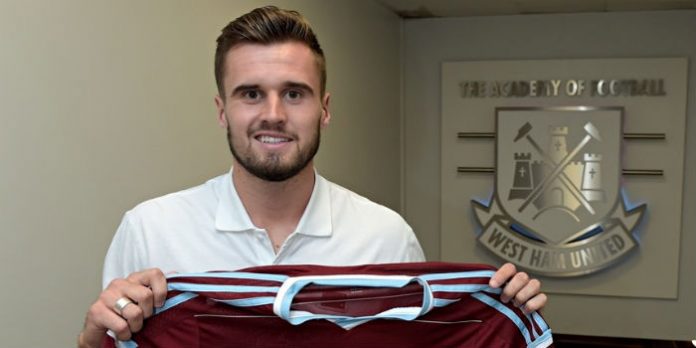 West Ham United chairman David Gold has confirmed that Carl Jenkinson remains a transfer priority even though Sunderland have reportedly had a £2 million loan fee accepted by Arsenal.

The right-back made 29 Premier League appearances for the Hammers last season as they finished 12th in the table.

Eager to ensure new boss Slaven Bilic has suitable cover in defence, Gold told the BBC that a move for Jenkinson is still being worked on.

“We know we need a right-back and will work tirelessly to bring in Carl. If that does not work out, we have other irons in the fire.

“We said to Slaven ‘get your priority list and let’s see what we can do’. We have a track record of working with our managers.”

It’s thought Jenkinson would prefer to stay in London rather than make the move to the North East. Either way a decision on his future is unlikely to be reached until the 23-year-old returns from the under-21 European Championships in the Czech Republic.

West Ham qualified for the Europa League via UEFA’s Fair Play system and potentially face six games in the competition before the Premier League even starts. Their first game is scheduled to be on 2 July.

He is great, Carl the Gooner.

Hope he comes back to fight for the right back spot after his loans.

Passionate lad. Still not sure if he is a proper RB or a CB…

Gunner From Another Mother
Reply to  brucejuice

What have you seen to think he’d be suitable at CB? We are talking Carl Jenkinson, not Calem Chambers 😐

Get Zlatan in just for the banter.

WestHam loan will do good coz he is well settled there and they are playing Europa.So more games to play and more experience to gain.Then he should be ready for his boyhood club,the Arsenal.

He’ll end up back at West Ham. The Sunderland thing is just a way to put pressure on them to cough up the loan fee we want to extract. Everybody knows he’s better off staying where he’s been than going off to that horrible cold place in the north.

Maybe we should offer Chambers instead.

Gunner From Another Mother
Reply to  Guane

I believe Apocalypse, foe of the X-Men, put it best when he said:

“Foolish fool, your foolishness amuses me!”

I love Jenko, but Bellerin is too much of a rocket in a pocket. You then have to say Jenko or Debuchy for the number two role. Loans are good if we can call them back in emergency a là Le Coq.

The probability that Debuchy gets his place back is much higher than people tend to think. He has a lot more experience than Bellerin and wasn’t on the bench for underperforming but due to freshly coming back after injury. Plus, Debuchy will need game time to be selected for EURO 2016 in France. he will do whatever it takes to get back in the starting XI.

West Ham for another year, then replace Debuchy maybe? Not sure how long his “long term contract’ is for….

I’m not shedding any tears for West Ham, but starting in the first qualifying round of the Europa League is absolutely brutal, and for fucking Europa League. What a joke that competition is. They need to drastically cut the number of teams involved in qualifying, it’s absurd that qualifying begins in the first week of July honestly. I’m so glad Arsenal have never dirtied their hands with the kinds of clubs that frequent the Europa League. I really wouldn’t be surprised to see West Ham relegated this season, having so many games and basically not having a summer will just… Read more »

Who are you kidding mate, if we were in Europa we might stand a chance of getting somewhere in terms of a trophy instead of the embarrassing non-progression we have every season in Champions League..

That’s exactly why the Europa League is such a horrible competition. Chelsea won the thing in 2013 after crashing out of the Champions League, it was their worst European season under the Russian thug. Yet they won a supposedly major trophy. Arsenal meanwhile have never even been in the competition, and this is a good thing. How backwards is that? They need to stop having Champions League teams drop into it. Arsenal surely could have won it once in recent years if we were ever poor enough to not reach the Champions League knockout rounds.

Well looks like you are forgetting or ignoring the laws of natural selection in football mate. Put it thus way: there are teams predestined to play that competition. That’s their fate no matter what they do, how much they spend and who they sign. Their destiny is to play on free to air shannels on a Thursday night, end of. On the other hand, there are those predestined to higher glories and only play on a Tuesday or Wednesday nights. At this level it’s does matter a little whether they win it or but the feeling of belonging to that… Read more »

Nice one mate…got me cracking!

West Ham was above us in the table some mid-season weeks. I think you underestimate them a bit.

Playing in Europe is about the squad rather than the 1st 11.
They don’t have the squad for it and it’ll effect their PL form negatively.
I wouldn’t say they’ll go down but they certainly won’t do as well as they would have if they’d missed out on Thursday night football.

I’d like to see him stay at West Ham personally, it would be great for him to get some European experience under his belt. Do the job this season Jenko and come back fit and fighting with Hector for the starting spot in 2016/17

I love that David Gold said “we have other irons in the fire”.

I wish it was the Blues in the fire, not the Irons.

Mr media that accent is on the wrong ‘a’. It’s called accent grave ( pronounce aksan graav). It’s usually put on ‘a’ adjectives. The ‘la’ there, is a indefinite article at the singular feminine, as opposed to ‘le’ the masculine contrepart. Le Coq being a bloke should go with ‘le’ which is incidently there already. Furthermore, if ‘a’ precedes a feminine noun or subject, you have ‘a la’. If it’s a masculine, then you have ‘au’. Simply because ‘a le’ sounds horrible, despicable and shouldn’t be heard in 21st century. In the light of all the gibrish above, you should’ve… Read more »

Man, I should just give you my name!

Can we swap please mate?

Mate, you just owned the internet

“à la le Coq” is hactually pretty much correct, short for “à la manière du Coq”. “Au Coq” would mean to or by the cockerel/Coquelin, which might mean something different. Pedan’ts Corner out 😉

Well first of all I have no idea what you are on about mate. Hactually is not french nor English unless I’m mistaken. As a general rule, a single noun cannot have 2 articles. The example you gave is correct but has 1 article whilst the original sentence has 2 as maniere has only ‘la’. Anyway you are perfectly untitled to speak broken french. Freedom of speech eh?. When I go back to France my brothers try to impress the missus by speaking broken English too. Although it hurts it has been pointed out to me that you cannot arrest… Read more »

I’m a professional proofer reader and still make mistakes. This probably isn’t the right forum to be picky, even if you were 100% perfect.

Your apostrophe is in the wrong place in the word Pedan’ts.
If Arsependant sees that we could be in for another 700 word essay 🙂

Jesus Pearson! Give the guys a break. Now THAT’S is called 2 faced lol

Guys please calm down. Please put yourselves in my shoes: TV is dull, there is nothing tangible to talk about as the transfers won’t be happening for few weeks. Only speculations from tabloids at the moment and some frankly traumatising like Jack (the martyr) going to Shitty. Jon Snow is dead (most likely), England Women only play once or twice a week, Wimbledon is dayyys away. I somehow cannot concentrate on Copa America, even Chile games. Found myself working from home because the office above ours flooded. It’s clearly a desperate time. I the french grammar pickyness was just one… Read more »

No offence taken by anyone I reckon.

However it is funny to see mistakes by someone who is pointing out mistakes.

All harmless stuff to fill time, no apology néeded.

The fingers of Dave