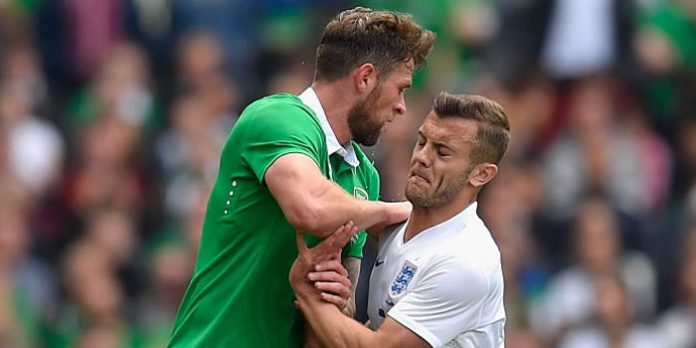 Jack Wilshere has expressed his unhappiness at the FA charge of misconduct he was given after Arsenal’s FA Cup parade celebrations.

We all know why it happened at this stage, and I think we all accept the fundamental truth he was trying to share with the world, but the FA didn’t take kindly to it and Wilshere could miss the start to the season if handed anything more than a fine.

Speaking yesterday after England’s dull as dishwater 0-0 draw with Ireland in Dublin, Jack was asked if he was disappointed with the disciplinary action.

We’ll find out in due course what the punishment will be, meanwhile Wilshere is likely to feature for his country next weekend as England face Slovenia in a European Championship qualifer.

“All the boys want to go away on their holidays and enjoy it, but before that we’ve got a big game,” he said.

Meanwhile, Sol Campbell has announced his intention to run for Mayor of London, the first step of his ambitious plan to become SUPREME GALACTIC RULER of the UNIVERSE and BEYOND.

Whatever happens, one thing is for sure, the banter will be just lovely.

Sol – if he gets in let’s hope he doesn’t storm off at half time.

Or join the opposition and become Mayor of Paris.

does this matter even come under the jurisdiction of fa?!

They get short of things to do over the summer…

What do you think of the FA?

Same as what I think of Tottenham.

I hope one day, there’s another (club) player make a worse thing than jack & the FA realize it, charge him & apologize to jack publicly for their mistake. Still can’t accept the fact that jack is being charged on a ridiculous thing.

Any word on charges for the Leicester City players?

every week you hear disgusting and sometimes racist/homophobic chants from the crowds of all teams. Yet this is what irks the FA…

What bothers me is that he did exactly the same thing last year and no charge was brought. In fact, from what I can remember it went completely unnoticed by everyone except those who were at the parade and those watching it on the Arsenal website. The only difference this year is that it was picked up by the media, which worryingly seems to suggest that the FA are influenced by the media’s agenda and are using the press as a means of discovering disreputable behaviour (which this barely qualifies as…) rather than having their own ears to the ground.

who else is rubbing their hands at the thought of Ibrahimovic being a gooner next season?

Mark Hughes
Reply to  Just telling it like it is

He had his chance to join us and didn’t take it.

This is true, and quite sad. But if he came back then we’ve no doubt lost him when we could no longer afford to keep him.
**IF** he were available I’d have him in a heartbeat. He’s always seemed like a guy made for premier league – big physical presence – and could do a similar job to Giroud in terms of holding up play.

There’s only one problem with him. If he’s in the mood then he’s unstoppable but when he isn’t, he’s completely anonymous and add zero to the team. I’m not sure we have any games where we can carry any player and add the problem that if we’re losing and want to sub him, then he could get stroppy and not be in the mood for the next 5 games but insist he should start. IMO PSG is the right place for him where they have +/-8 difficult league games per year plus the CL games which is enough to keep… Read more »

Who the fuck did Wenger think he was, offering Zlatan a trial?

I wonder if Sol can cure leprosy?

I think we have to stop calling these lads “invincible”. Its starting to turn em all weird like.

Vote tory boy weirdo, I go to see mama mia 7 times in the same season, Sol for mayor??? Are you having a laugh? All joking aside, I’d gouge my own eyes out and eat the neighbours kids before I voted the Tottenham of politics in! (not a reference to Sol…more “what do you think of Cuntservatives?”)

The Mighty Arse
Reply to  David Hillier Handled My Luggage

How dare you?
Leave those kids aside mate.

In other news we are being linked with zlatan.
#daretozlatan

I want to know what treatment he got after fucking off to Belgium at Half Time against West Ham. Must have been some really bad shit to turn him into a fucking tory.

Wilshere for President!!! Oops it’s a constitutional monarchy. Wilshere for CBE!! since the Queen is Gooner

“What will be, will be
WE’RE GOING TO WEMBERLEYYYYY”
~Arsene halfway through his interview.
…
Anyway, An FA insider has told me the punishment will be 763 lashings, before deportation to Terra Del Fuego (spelling?)

Sol claims that politics never affected him until he became a multimillionaire with a property portfolio. But he’s driven by equality. Best of luck to his campaign manager with that one…

Yes, he’s equally strange to everyone.

Sol for the people……the very rich elitist people and fuck the feckless idiots that paid for all my massive houses. #VoteSol

In as much as I enjoyed that, I think Wilshere went a bit overboard. Last year, I was worried he was going to get fined and banned.
Credit to him for having the balls to do it a second time. Unprofessional, but I enjoyed it.

Can’t see the problem with shooting a bird and eating it. Can’t see the problem with not shooting deer. Can see that author of the Sol Campbell is an imbecile. Shooting and eating a grouse is immeasurably more ethical than buying tesco chicken. beinf left wing and having common sense / open mind shouldn’t be mutually exclusive. plus Sol is a legend and of all the stuff he’s said over the years this is not the most ridiculous by a long shot.

all hail the mayor Sol….

God is Bergkamp, Bergkamp is God