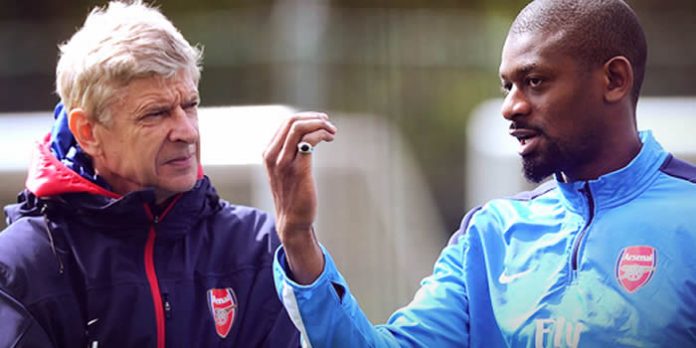 Abou Diaby looks set to sign a two-year deal at Marseille after the Ligue 1 club confirmed they’d reached an agreement with the player.

The midfielder, who was released by Arsenal in July after nine years under Arsene Wenger’s stewardship, turned down the option of a ‘pay-as-you-play’ deal at West Bromwich Albion in favour of the move to the revamped Stade Velodrome.

La Provence claims the France international has taken a big pay cut to move to the south of France and will work closely with club doctor Christophe Baudot to reach the required fitness level.

Marseille are said to be realistic about their ambitions for Diaby setting the player 20 appearances as a target in his debut season.

Diaby will be joined at Marseille by fellow ex-Gunner Lassana Diarra. The 30-year old, who hasn’t played competitive football in a year due to a contract dispute with Lokomotiv Moscow, put pen-to-paper on his deal last Friday.

Good luck to Abou, we’re really pleased to hear he’s found a decent club and that he won’t have to watch Tony Pulis gallivanting in the showers.

Trully, trully, happy and excited for Abou.
Wishinv him a great return to the game.

Good luck Abou! Hopefully we’ll get to see some of that fantastic potential fulfilled. Watching some of those highlight reels makes you think what might have been. Hopefully he can tear up Ligue Un for a few years yet.

Here’s hoping we don’t meet him in the Champions League group stages, because if he kicks on, he’ll be quite something to deal with.

Marseille didn’t make the Champions league this year, so that’s that problem solved for the time being.

I’d love it if we played against him in champions league we’d score a bucketful the amount of time he gives the ball away in dangerous positions in midfield!

Good luck Abou. Show what you can do.

Not looking down on the Albion or anything but if Abou (in a Bromwich shirt!) had to line up against us this season man-tears would flow and other teams fans would talk and the FA might fine Jack again for no reason and other bad stuff would happen.

One of the Beeb’s gossip items that announced the Marseilles deal noted that Diaby “turned down an offer from West Brom”. Well done, Abou! No true Gunner would ever want to play for Tiny Pubis.

Really good news that. Good luck to him.

There are many players who could learn many lessons from his professionalism and dedication.

Good luck Abou! Here’s hoping that you easily surpass that 20-match target and pick up a trophy on the way.

All the best to Abou. Really sad that he never got even one injury free season with us. Looked like he was back when he destroyed the mugsmashers a few seasons back (ah, the memories) but wasn’t too be.

On the plus side ‘The Jeff’ (based on very limited viewing) looks like he could be a similar kind of player (touching all the wood i can find).

I love that picture because it looks like Abou the manager is giving Wenger the player instructions.
Anyway, I refuse to sell him on FIFA. Going to make him my highest paid player and build a team around him. Fuck y’all.

Hi everyone. Me again. Just back from playing FIFA. Um. Turns out I sold him months ago and now he doesn’t want to come back even on a 300k/week 20% goal bonus super contract. Oh I’ve ruined everything *sobs uncontrollably*

Really happy for him.
Ok. Is all this news about Benz true? The media is reporting that he left the Real Madrid tour of Asia and posted a cryptic message of “Destination Futur”
Is his” futur” the Emirates?

Go forth and take Lige Uuuuun with storm Abou !

https://www.facebook.com/ThePremierFootball/videos/862342003841864/ BENZEMA IS NOT COMING TO THE ARSENAL HAHAHA this video is all the proof you need

smart move to get out of the premiership for the sake of his health and better chance of prolonging his career. the prem is too touch for that fragile body.

It is worth a gamble for Abuo Diaby to change from one League to a new league to see if he can still save his football Career.

Great move for him. I hope he does well. It’s sad that he couldn’t have had the Arsenal career he deserved, but at least he’s still in the game. Class act all the way.

I’m now Marseille fan. Where are they from again?

I think they’re in the Macedonian 3rd division.

Thanks Blogs. The thought of Pulis in the shower, totally naked except for his daft baseball cap – there goes my breakfast.

Wouldn’t it be fun to play them in the CL? I’m not sure if they qualified and too lazy to look it up, which is strange because this sentence has required more keystrokes than it would have taken to Google it.

I really hope he hasn’t regressed after not playing for 3 seasons. If he can pick up where he left off, he might pull off a Rosicky in his mid 30s and hopefully late 30s.

Not to make jokes at poor Abou’s expense, but if we’re going with the Rosicky analogy his “football age” must be in his early 20s still! Marseille can get a decade of top class footy out of him still.

I just hope he can find some of fitness and get some games. I’ll be watching the french league for sure. All the best Diaby…hope Jeff is our compensation for the club treating you with class.

Fucking heart breaking what happened to him, good luck fella.

I love the word gallivanting. Or I did until you used it in that context.

Hope Diaby does well over there.

All the best to him. A real shame he never got the chance to live up to his potential, he could have been a really special player for us. I hope the less intensive pace of ligue 1 means he can keep fit and rejuvenate his career.

All the Afro guns favour A-Diaby. Will always be thankful. Gun em down

How much are Marseille giving us? By his talent and at the peak of his career things could’ve been different. best of luck Abou

I think it is a great move for Abou.
League 1 is less physical than the PL.
Let’s hope he stays injury free now.

I Marseille all the best to him.

This is a fantastic move for Abou!

Marseille are a top team in need of a bit of reinvention.

Diaby can still make the most of whats left of the career and rebuild in France.

All the best for you, Abou. Arsenal Legend!

Arsenal legend?
This man kick down john terry. He is more than a legend

Whenever I’m feeling a bit down I like to watch the video of that. *Bam!*

Best of luck to Abou!

Great move for Abou. Marseille is among the top teams in France and their coach Marcelo Bielsa is fantastic. Not much trophy in his career but the model for Guardiola, Sampaoli (The Chile coach) and so many others … All his teams play great offensive football.Still remember the lesson Bielsa ‘s Atletico Bilbao gave to Ferguson in the Uefa cup a couple of season’s back.
Hope Abou will be fit enough to support the rythm. Because Abou +Bielsa that could just be magic.Best of luck.

the one where they asurped the metro

Best of luck to him. He really deserves a change in fortunes. I heard they’re hoping to get 20 games a season out of him. If he’s able to do that he could make a huge difference for them.
The only concern I’d have with Marseille is that Bielsa plays a heavy pressing game and I just hope that it isn’t too intensive for him.

Great move for him I think. Surely he can find fitness and form in a less physical league and a warmer climate. Wishing him all the best.