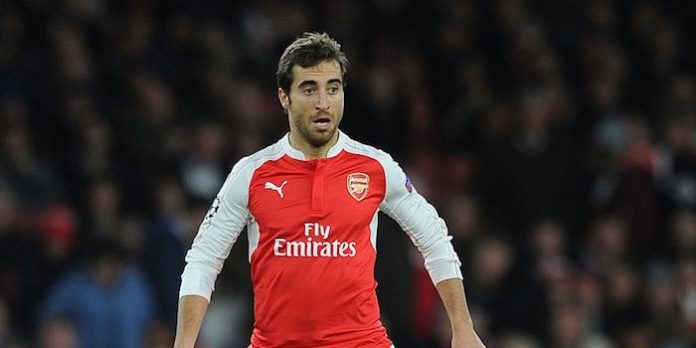 Mathieu Flamini has bemoaned the spate of injuries to teammates this season, but says it’s part and parcel of the modern game and that the Arsenal squad will have to cope.

It doesn’t make life any easier but Flamini says they’ll just have to get on with it.

“Of course, it’s never easy but it’s part of the game,” he said. “The season is very long, it’s always like that, and you have to face the problems and the injuries.

“But to win titles, you don’t win it with 11 players, you need 25, and everyone has to play a role during the competitions. With such competitions and so many games, you need everyone ready.

“But sometimes you have to face reality, and injuries are part of football and part of the title race.”

Flamini may be called up to deputise again for Coquelin this weekend when Arsenal face Norwich.

Also … he could just buy us what we need .

Just what exactly is a “Pulsating gooch” ? Being half way around the world I’ve obviously missed something in the local lingo! 🙂

Reminds me of a girl called Clare in 2nd year uni..

The gooch is the bit between your balls and your arsehole. I’d imagine if it was pulsating it would seriously hamper ones ability to play football.

So John Terry is a gooch

Zorro in the Box
Reply to  Arsene's zip

I got one of their albums on E-bay.

Are you telling us you’re actually familiar with the other six terms?

Dammit welbeck…stop using the incognito mode so much :/

Those ailments got rather spicy rather fast

Hope Flamini has another trick up his sleeve – something that will make even Diaby a regular!

No tricks; he cut the sleeves off…

I can hear the cry of super injuction from here.

Watching match of the day and listening to the CUNT makes me want to strangle him.

Champions league highlights not match of the day.

Would be funny if United draw at Wolfsburg a

Do us a favour and buy us a new club Doctor. I’m told Eva is available

Didn’t Chelsea manage last year with just 13 players or something?

Because all of them were doped and didn’t get injured.

Incorrect: Past couple seasons Chelsea did two crucial things very well, first/ they’ve made some brilliant signings and had a very well balanced squad. Second/ fundamentally perfect preseason last year is what guaranteed title for them. Their preparations were well timed and well balanced intensity wise. On contrary, this year the moaning one became complacent( and improved his arrogance) therefore his squad only Bowie starting to show signs of life, and I believe they will start picking up few extra points that might just put them in top 5 in EPL come the end of the season. Regardless, what Chelsea… Read more »

Flamini should just invest in a company that ensures only ryan shawcross, chelsea players, and of course spuds get injured.

Thankfully we were spared the heat maps.

Gudang Pelor
Reply to  The Only Olivier is Giroud

Was watching the highlights last night on ITV. I knew Roy Keane was a twat but still surprised how bigger tosser he is. The guy is a complete moron

Blogs please am lost here…..what on earth are these out-of-space ailien injuries? lols.
How I wish sp**ds, chelshit and stoke city players have them more!

It’s also called a “taint”….taint your balls and taint your arse. Cyclists know it taint fun the first rides after time off. Regarding the Flamster….kick arse and take names Mr. Flamini, some of us realize you have much levulinic acid left in your tank!