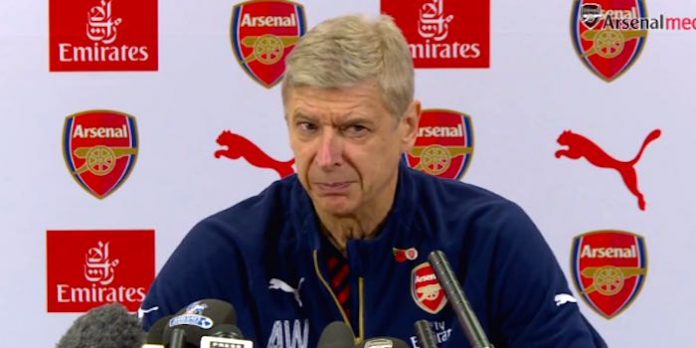 Arsene Wenger has confirmed that Alex Oxlade-Chamberlain ‘could be available’ for selection against Norwich on Sunday.

The England international hasn’t featured for the Gunners since limping off against Sheffield Wednesday in the Capital One Cup and will provide welcome competition in a midfield missing Francis Coquelin, Jack Wilshere, Mikel Arteta and Tomas Rosicky.

The boss also confirmed that no new injuries were picked up against Dinamo Zagreb meaning Aaron Ramsey came through his return unscathed.

There is a slight concern over Alexis Sanchez who apparently has a minor hamstring issue, however, despite the temptation to rest the Chilean it looks as though he could play at Carrow Road.

“I will assess that later,” said the boss. “It might not be the right time to rest him.”

The right time to rest Alexis might well be the end of the season.

the only sam is nelson
Reply to  Man Manny

the end of his last season before he retires from the game, you mean?

Cape Town Gooner
Reply to  the only sam is nelson

Lucky for us, there is ANOTHER Copa America next year, because it is the centenary. Poor bugger is never gonna have to wait until summer 2017 for a break…

Confederation Cup is 2017 and as Chile won the Copa America they’ll be there. Then there’s the World Cup in 2018…

That end of his last season just before his retirement comment is looking more and more likely.

Third Plebeian
Reply to  the only sam is nelson

Even God knew when it was time to take a rest.

? a minor hamstring problem. Not the right time to rest him. Against Norwich. Even though Ox could be back.

Is Wenger trolling us again?

lettraggad
Reply to  Me So Hornsey

It was only West Brom, only West Ham, only Zagreb.. some people.

They seem to have forgotten we play in a league where every single week there is an upset of some sort, no such thing as an easy game, especially seeing as teams like to really turn up when we play them!

He’s right. Now is the time to build some momentum again, so this is a must-win game and Norwich (away) shouldn’t be underestimated at all. Perhaps when a few more players return Alexis could be rested.

Wenger will rested Alexis against Norwich in the 90th minutes I think.

Whilst no team in this league should be taken lightly, the fact that we cannot rest a key player (with a niggle) for this match destroys any argument for us having the squad depth to win the title I’m afraid

You seem to be omitting the fact that our squad has a number of key injuries. It’s the squad depth that Wenger had to dip into to keep 11 players on the pitch.

I loved Wegers comment when he joked that a rest might make Alexis tired. What a specimen!

I really hope Alexis can play against Norwich. Whether I hope he WILL play is a different matter, however.

Alexis will be roaring to start another scoring run.

The only person who can rest Alexis is Alexis…I’m not sure he can either maybe God can.

Since neither the toothfairy nor any god exists, the assumption that he will never be rested, must be made.

I cant help go off topic here lads…………plse forgive.
I watched the Scum last night , playing some team from Holland.
The hundreds of millions on the pitch was staggering and Im delighted to say they played like the shit they are.
There was one bloke who sports a nice comb over and is allegedly paid 300 a month, who trotted his way around the park ……………………what a disfunctional/mercenary group………… looks like theyre goosed in Europe with an away game to the Germans next.

With Alexis finally back in the goals, I honestly can’t see Wenger resting him this Sunday. For me the question is whether or not to start Ramsey, and if yes who to bring him in for. Suspect Ramsey and Ox will both be on the bench and the team will be unchanged from Tuesday.

Not a med expert or a physio but he will play with a minor hamstring problem? I definitely agree that Sanchez in the squad is necessary for us continuing momentum and consecutive wins which is very important for morale (even though we could win without him), but I think we’re increasing the chances of aggravating a minor injury. Holiday break is a long, mentally and physically run of games, I think we should rest him and give Gibbs a go. Flamini did a good job but wouldn’t mind seeing Chambers given a go as a BWM in the middle of… Read more »

Would love to see Chambers get more games but as for holding midfield. He gives the ball away too many times in dangerous positions, can’t afford that

Sanchez has a minor hamstring problem? A good idea really to play him? I agree back to back consecutive wins is great for morale and later performance but I think we can win this one without Jesus Sanchez, put Gibbs in instead. Give him a rest, because if we don’t we run the risk of injuring one of our most important players ahead of a long, tough, gruelling run of holiday season fixtures. Flamini did a good job as a BWM, but wouldn’t mind seeing Chambers given a run in this position- he’s not really impressed so far but he’s… Read more »

I think Wenger will start Cambell ahead of the Ox

What the eff is a BWM?

Ball Winning Midfielder- basically a DM who plays in the middle of the park as a central midfielder rather than just in front of the defence.

That sums up the thumbs down, then.

I’ve had to go back and mark your post down now for bringing in an abbreviation from a game to talk about an aspect of a game. How dare you mix games with games. It’s just not cricket.
Yours in disgust,
Angry of Dagenham

Some men see things the way the are and ask “why?”: others dream of things as they ought to be and say “why not?”
Surely with £200million in the bank, things ought to be that we do not put so many of our eggs in the single Alexis basket….
Surely, we could and should have a team where if a player needs rest, he gets it knowing that someone of similar capabilities will step it….
Only remaining option is to ask Wenger: “why not?”

Not sure if anyone available in Jan has similar capabilities, but Wenger largely values team cohesiveness over new signings. With that being said team cohesiveness and spirit should be a minor consideration when as a whole the team is prone to many injuries. City had 3 major injuries and you can see how that has affected their performances recently, and we need adequate cover to challenge even just for the EPL (ignoring the CL and FA Cup). My main concern is what if Ozil gets injured then we are really missing our creative spark. Hopefully our little Czech magician gets… Read more »

Would prefer to see Gabriel given a run. Only problem is Per and Kosc have a better understanding and Gabriel and Kosc both are aggressive in closing down which can unbalance the defence. Still Gabriel will develop that understanding with Kosc given the time.

Per still is solid, but personally I get nervous watching him, because any form of relentless pressing (i.e. Spurs or Liverpool) can unsettle him

Start Alexis.
With a hopefully 2-0 Arsenal ahead, bring Alexis out say….min 65 and rest him.
Thats of course perfect scenario:)

Ramsey’s gonna play alongside our diminutive Spanish magician. Campbell will retain his place on the right. The rest of the team will remain unchanged.

No need to rush Ox back although he certainly will be a bonus as Ramsey.

I think Campbell has shown great apttitude. He protects the ball well, uses it intelligently and supports the fullback both going forward and tracking back.

he is a genuine option ON PAR with Ramsey or Ox for RW, all 3 have varying assets to bring which is a very good thing indeed.;)

This website uses cookies to improve your experience while you navigate through the website. Out of these, the cookies that are categorized as necessary are stored on your browser as they are essential for the working of basic functionalities of the website. We also use third-party cookies that help us analyze and understand how you use this website. These cookies will be stored in your browser only with your consent. You also have the option to opt-out of these cookies. But opting out of some of these cookies may affect your browsing experience.
Necessary Always Enabled
Necessary cookies are absolutely essential for the website to function properly. These cookies ensure basic functionalities and security features of the website, anonymously.
Functional
Functional cookies help to perform certain functionalities like sharing the content of the website on social media platforms, collect feedbacks, and other third-party features.
Performance
Performance cookies are used to understand and analyze the key performance indexes of the website which helps in delivering a better user experience for the visitors.
Analytics
Analytical cookies are used to understand how visitors interact with the website. These cookies help provide information on metrics the number of visitors, bounce rate, traffic source, etc.
Advertisement
Advertisement cookies are used to provide visitors with relevant ads and marketing campaigns. These cookies track visitors across websites and collect information to provide customized ads.
Others
Other uncategorized cookies are those that are being analyzed and have not been classified into a category as yet.
SAVE & ACCEPT
wpDiscuz
43
0
Would love your thoughts, please comment.x
()
x
| Reply