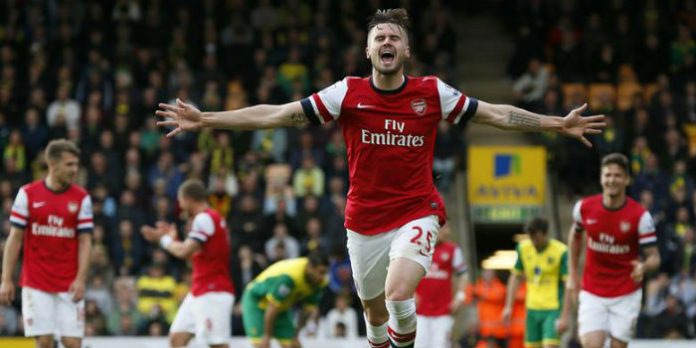 Arsene Wenger has confirmed that Carl Jenkinson’s season is over after the defender suffered anterior cruciate knee ligament damage in West Ham’s 2-2 draw with Manchester City.

The right-back, on loan at the Hammers for the second successive season, picked up the injury in a collision with Sergio Aguero that also earned the Argentine a penalty.

Earlier this week West Ham revealed Jenkinson’s injury was serious although their official website stopped short of publicising the specifics of the problem.

Speaking at his weekly press conference, Arsene Wenger shed more light on the situation: “He has a cruciate, so that rules him out for six months.”

Asked if the 23-year-old had subsequently returned to Arsenal to begin his rehabilitation the boss nodded affirmatively.

As is often the case with cruciate injuries they require a long time to heal; often longer than the six-month timescale predicted by Wenger. If there is a positive side, if his recovery goes to plan he should be in a position to challenge for first team football from the start of next season.

It’s worth remembering that Jenkinson signed a new long-term deal at the Emirates before moving to West Ham in the summer so his future at the club isn’t under threat.

What a guy, first a fan. Now a player with true Arsenal DNA

And the savage comment of the year goes to….

Suspect he will be Bellerin’s backup next season. Hope he’s back to fitness with Coquelin-esque speed

Doubt it, I’m afraid. As the article says, Wenger’s ‘six months’ is highly optimistic (to put it politely). Cruciate injuries normally take close to a year – Pires was a full year, Gnabry nearly as long – though the players almost always eventually come back good as new. As for whether poor Gnabry will return to his full potential after a second year out . . . Fucking grudge-driven West Brom. Seems the chairman is as much responsible for this insane situation as Pulis himself. Apparently they’re two bugs in a rug, both equally chippy and obsessed with how the… Read more »

I agree with you on the suspicion.

But, what if Jenks does a Coq and actually beats out Bellerin for the #1 spot, eh? That would be a nice trouble to have, no?

What if we keep him and play him occasionally on the wing? I’ve always thought he had good accuracy crossing the ball into the box. He would be a good sub off the bench to protect a lead and create some space/chances off the wing.

Really would love to keep the guy around for the banter.

Looking around the football world, crossing the ball is going the way of the dodo, as it just doesn’t deliver. Pardon the pun. Statistically speaking, crossing the ball has a low success rate, and manager’s like Wenger and Pep Guardiola recognise this. Hence the oft heard complaint be certain sections that Wenger’s teams try to “walk the ball into the net”. That’s because crossing into the box has been successfully countered by the central defensive pairing. And the tactics and formations have now pretty much neutered the style of game played in the 50’s, 60’s and 70’s. Whilst the likes… Read more »

Funny how they rarely get them during training though, right? I’m no sports scientist, but I’m pretty sure it wouldn’t happen as soon as they play on a softer surface.

I’m assuming Man City, Man U and Liverpool also train on a hard surface, seeing as they’ve had equal or more injuries than us this season, despite ex-player pundits from each team claiming that our injury problems MUST be due to the hard surface at London Colney.

I reckon Jenkinson’s injury is probably due to him training with us two years ago though.

Really hope he finds his form from last season and builds on that, if he does then our RB position will be sorted for a long time with two quality players

How I wish it was Aguero with the cruciate injury instead. How I wish I tell you.

tough break for the lad. He always seems optimistic so that will help him through the recovery period.

Sucks for him and hopefully won’t prevent him from coming back to Arsenal and backing up Bellerin next year. Can definitely make it back to the training pitch in six months, but the season starts in just over 6.5 months and will take a while to get back close to 100% (at least another three months usually).

As mentioned, when Debuchy departs on loan (or a sale), Chambers is the likely player to step in back into his natural position which he played at for Soton.

Chambers is more technical and plays with his head up where Jenkinson tends to whip crosses in blind.

Looking forward to tomorrow, do you guys think Elneny will start?