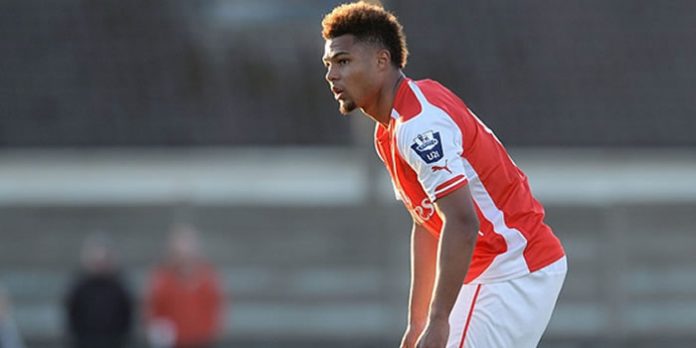 A trio of Championship clubs are vying to take Serge Gnabry off Arsenal’s hands now that the emergency loan window has opened.

Having prematurely ended the German winger’s loan spell at West Bromwich Albion, Arsene Wenger has said he’s eager for the 20-year-old to see first team action on a short-term basis.

Fulham are the latest side to be linked with a move for Gnabry, who is also wanted by Brighton and Charlton.

Charlton, who recently signed Yaya Sanogo on loan for the rest of the season, are currently bottom of the table and in desperate need of reinforcements.

The Addicks have been credited with rehabilitating the form of both Alex Song and Francis Coquelin in recent years. Both midfielders spent short spells at The Valley before returning to the Emirates and regaining first team places.

The emergency loan period runs until 24 March meaning there’s plenty of time for business to be done.

A scrap at the bottom of the championship for the reinvigorators that are Charlton, may just be the stepping stone for Gnabry. So promising.

The championship is a tougher league now than years gone by. I think it’s just what he needs in order to be back in contention in the first team.

Let him go to Chalton. He will do a Coq.

Gnab him while you can

Watch whichever club he goes to Serge up the league

It’s a double win, our lad sees first team action and learns some grit and Charlton get a top player for nothing.

Yep….They should while they still can!…..Gnabry is really a very special talent and we wouldnt even be thinking of loaning him out to any team, if not for his long term injury that now neccessiates the need for him to get 1st team football playing time to get back into form.
when In form?..for me, he is definitely a 1st team player

Just had a look through the Coquelin link that’s provided and read the comments. Although all the comments were hilarious, it just makes me so proud that our Coq has become such a big part of the team (haha). I mean there was a guy who was wondering if he was being deployed as a winger or something. I hope he goes on to have a fantastic career with us because his resurgence has really been something. Go and Gnab this opportunity Serge! That thrashing you gave to Spurs in the cup shows that you have the potential to make… Read more »

Btw, I must also mention that there’s a guy towards the very end who predicted that our Coq would come back and nail a place in the team. So kudos to that guy!

Off topic, Guardian mentioned that football supporters federation is planning talks with supporters clubs about protest over ticket prices.would ve great to get news updates regarding arsenal supporters club view on that

Serge gnabry, the guy who looks like he eats too much cadburys. I hope he can recapture the form that made us all so optimistic about him!

There was a young man named Serge, who we all thought was on the verge, then he got crocked, his progress was blocked, now lets hope Charlton helps him emerge

Is it me or is the Sergeman looking pretty trimmed down these days?

Anyway I only really wanted to comment so I can make a joke about Alex Song but I really can’t think of any. Except just thinking of him leaving us for FC Barcelona makes me chuckle.

And then thinking of him warming the bench at West Ham while still being owned by Barcelona makes me chuckle some more. Thank you for reminding me of Alex Song.

He needs to get out there and compete.

He’s fallen off since coming back from injury.

There are very hungry players eager to (and have been) impressing in Iwobi, Akpom and the naturally talented Jeff not to mention the likes of the younger Willock, Bennacer.

Ahead of him Campbell is making the step up as is Ox.

Gnabry just needs to work hard at it. He was a bit heavy coming back but if he can put the work in, he has the assets to be something exciting for us in the not far future.

Its not just Coquelin (whom by the way many did not give a chance of succeeding). I mentioned Wenger kept him for a reason. But also Bellerin. I mentioned he was ready for the step up yet many preferred to think Jenkinson was a better bet despite his limitations. I have now been saying Chambers is a potential to back up Bellerin in Debuchy’s absence yet again many belittle his chances and think he is a natural Cback when he is actually a Rback at Soton. Again this is all part of what people wish to see, much like they… Read more »

The latest one to get me is this whole bollocks about Elneny. Suddenly to those who want to believe it is so, he becomes this fantastic player that should start ahead of Flamini even though he was out muscled for the ball on one occassion too many against a championship side. Think. Granted he has massive potential like any young player, not every player is going to suddenly be a Coquelin (or Bellerin or Campbell) and crucially it will take time for him to adjust to the Premiership. Yet the simple minds would persist that he is ready to start… Read more »

Not convinced he’s good enough to play for Arsenal.

He’s quick, strong, skillful and can shoot with both feet…Personally, i rate him as much as the Ox when fully fit. Send him to Fulham to get fit and ready for next season when we will be defending our league title.