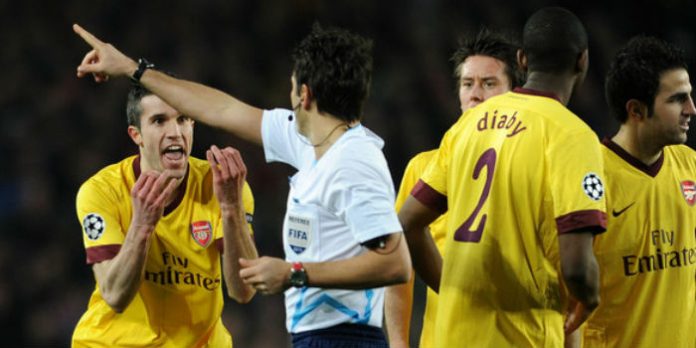 Arsene Wenger says Arsenal must avoid giving away ‘stupid fouls and red cards’ if they are to stand a chance of beating Barcelona in the Champions League.

Arsenal beat the Catalan side 2-1 when the teams last met at the Emirates five years ago only to get turned over 3-1 in the second leg; a match that saw Robin van Persie given a second yellow card for shooting at goal after the referee had blown for an offside. The boss was later handed a three-game ban by UEFA for comments made about the referee in the aftermath of the defeat.

The Dutchman’s red card wasn’t the first sustained by an Arsenal player against Barcelona. Gilles Grimandi was sent off for an elbow on Pep Guardiola in an away draw in 1999 and Jens Lehmann was infamously dismissed in the 2006 Champions League final for fouling Samuel Eto’o after just 18 minutes.

Barcelona’s only red card against Arsenal came in the 2-2 draw at the Emirates in 2010 when Carles Puyol fouled Cesc Fabregas to concede a penalty that the midfield scored.

The need for Arsenal to maintain discipline is all the more important with Joel Campbell, Olivier Giroud and Mesut Ozil just a yellow card away from a one-game suspension.

Our German midfield maestro was involved in several feisty encounters with Barcelona while on the books at Real Madrid, on one occasion – in the 2011 Super Cup – being dragged from the pitch by teammates after a stoppage time red card.

Nacho Monreal has also been sent off playing for Malaga in a Copa del Rey tie at Barcelona in January 2013.

Listen to this week’s Arsecast Extra, looking ahead to the Barcelona game and much more.

Two fixtures without the influence of the ref and/or naivety, please.

Not possible. Barca is the Uefa favourite team.

Just would like two fixtures without Mike Dean, please.

Diaby in an Arsenal shirt.

Regardless what we think of Coquelin he should really behave himself in the field for tomorrow’s game. He is fond of shouting or arguing when he commits foul. Instead of walking away, he will continue gesturing and arguing with the referee. That kind of behaviour is absolutely not needed tomorrow. Wenger should speak to him about such behaviour.

Agreed. Also, Mertesacker and Cech need to be a calming influence during the match.

His fighting spirit and shouting at part of his game and role in the team. I would be the least worried about Coq picking up a red as he usually is still pretty disciplined in his game. More worried by brain farts like mertesackers red against Chelsea

Barca will always pressure the ref for small decisions to go their way. We need more players to show spirit like coq to give the barca cunts a ticking off. One player doing it is not enough, it’s a collective effort to prevent the cunts from portraying us as dirty players.

Just like how the crowd reacted to Martin aktinston and eventually turning the tide in our favour, the players got to do it on the pitch once those barca cunts get at it.

One thing from the picture: Diaby was playing??

That picture answers you

That Ozil clip is brilliant. Fucking do ’em Mesut!

Footballer fights are so fucking ridiculous. Not a punch thrown, all handbags and pushing and puffing out chests. Pathetic.

Very very pathetic. One would’ve wished to see Mourinho dish out a blow to the ref and get a life barn ?

I’d love to have a life barn, somewhere I can stay at…

A fistfight brawl would get them banned for ages

The snake Mourinho, hiding behind everyone, stoking the trouble. Tasty challenge by Marcello though, granted we can’t have serious injuries being inflicted but who doesn’t love to see a quality reducer from time to time?

Sheesh.. I didn’t know Mesut had that violent streak in him.

Mourinho showing his class in the clip yet again.

I personally think the main problem is that every time we play Barcelona the majority of decisions go their way, including red or yellow cards. That is obviously influenced by few factors. One is weak referees, other naive Arsenal players, tactics can be influential too.

Most disturbing is how often Barcelona players are simply diving and cheating trying to con the refs into wrong decisions. That is my major concern, cheating.(similar to that of certain Bayern Munich players)

Great tackle. Right in front of the dug out. ‘Ave it

That tackle has got “Matthieu Flamini” written all over it.

Comment: Shit! The referee wouldn’t dish out a red if a Barca player had done the same thing RVP did during that match, UEFA’s fucking bias, thank goodness! that hell of a cunt called Michel Platini is gone for good.

Two close relatives, who support Man U and Chelsea respectively (one is a glory hunter, the other has supported Chelsea for like 50 years including when they were relegated, so fair play!) to this day reckon the RVP red card was the worst and most blatantly corrupt sending off they’ve seen in top level football. And they usually agree on nothing, especially when it involves Arsenal. You can’t do anything about a decision like that. But you can avoid stupid unnecessary fouls and dissent which makes it easier for the ref to screw you over.

@ zip: if a player throws a punch on field that might be classified as an assault if the ‘victim’ chooses to press charges, do your research before going all UFC, that might save you few years I a brig.

Are yellow cards not wiped after the group stages? If not then Camp Nou…no Özil no party

We’ve been talking about that game on the Guardian. It still makes me seethe with rage – I haven’t seen a referee so bent since, well, the time our unbeaten run was ended by Utd. Besides the ludicrous RVP thing, which we see every week in every league in the world go unpunished – the Barca players were rolling on the floor at every opportunity and on three occassions held our players by the throat. I know it will go down as sour grapes, but we were fucking robbed in that game. Barca were FIFA’s darlings, so they couldn’t let… Read more »

That yellow card against van Persie was a f****** joke

Ok, I’ve reached my quota of RVPussy’s name for one day. That’s one year’s quota of reading “it” on arseblog. I need a shower.

The only way arsenal will have any chance of getting anything out of tomorrow’s game is this—-arsenal are not suited to bus parking so arsenal will have to press barca high up……don’t give busquet breathing space, but you have to be careful as he is a scuba diver and can get somebody sent off for nothing. …..choke rakitic and inesta. ….if the ball gets to MSN it’s game over….that’s y coq , Ramsey and elneny should start in midfield, ozil on the right. …..if barca breaks the initial press then everybody should rush back to the front of the penalty… Read more »

Hope we don’t give them even the slightest advantage tomorrow. With our guys on their A game, we have a chance. These Catalan folks however will try everything to make matters worse for us. Pray we have an upright referee. COYG!

That mourinho. What a guy.

You got to be joking

We need per’s positioning not Gibbs

Seriously? Can’t you see suarez just rolling him like the tree he is? He will be sat on his shoulder with at least 8 teammates capable of rolling the ball just out of his reach

Boy am I glad you’re not picking the team tonight.

We need our fullbacks + Ramsey to have solid games. Ramsey in particular needs a to make sure he doesn’t rush into challenges and jockeys back well. Coq and Ramsey’s job of screening our CB’s is key to success tomorrow.

Crumbs a tackle like that on fiberglass, when at Arsenal, would have resulted in him being out for months!!! Still ain’t happy with him for being duped by Barcelona and then going to the blue scum – think whatever respect I had for the guy disappeared at that juncture!!!