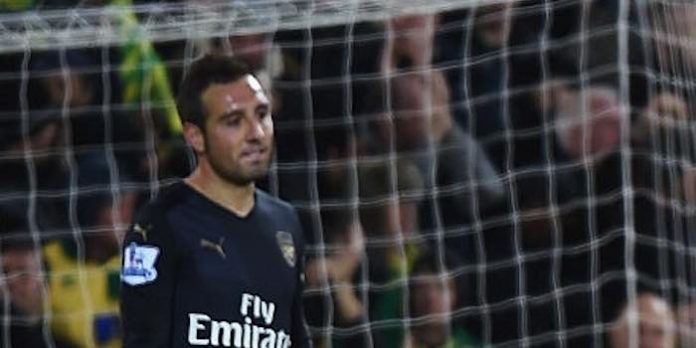 Santi Cazorla says he can’t wait to get back on the pitch for Arsenal after knee ligament and Achilles injuries have kept him out of action since the end of November.

The Spanish international has had to watch from the sidelines as the season fell apart, and that’s added to a sense of frustration already high by the fact he simply can’t play.

Speaking to the official site, he said, “I hate not playing. I need the daily routine of football so when I can’t do that I don’t enjoy it. I’m dying to play again.

“Obviously it’s been difficult for me to be out for a long period of time. I also had another problem on top of my knee injury, which was the original issue. During the recovery phase I started feeling some pain in my Achilles and that was something nobody was expecting.

“Everything was going well and my recovery was even ahead of schedule, but sadly it all went wrong on my second day running outside with the fitness coach. I started to feel a really sharp pain in my Achilles and that’s why it’s been five months.”

It’s hard not to wonder if he might have made enough of a difference during the time he spent out, but also impossible not to wish he’d been around when we went through that difficult spell when we almost ran out of midfield options.

He’s back in full taining, and although he’s still a little way from full fitness he should be involved in the final weeks of the season.

We all hate you not playing too, Santi.

It was just so obvious from the start of the season that if he or Coq got injured we were going to be in real trouble. After stumbling upon their partnership against City last year it was imperative that we had sufficient cover on the bench. Did we? Did we bollox! Sorry Santi, it would have been nice to give you something to look forward to on your return. Great to have you back all the same.

An Ox-sized Coq
Reply to  Easy as JVC

Honestly I’m getting tired of the “not enough cover” complaint. Sure it may be true, but all the cover in the world wouldn’t have made a difference cause the partnership being broken up is much worse than lack of cover.

Easy as JVC
Reply to  An Ox-sized Coq

But partnerships will always be broken up due to inevitable factors such as injury, loss of form or suspensions. In those circumstances the squad must be able to provide addequate assistance. When Flamini is the best like for like of the Coq, and nobody that can offer anything remotely like what Santo brings to the party then it’s a recipe for disaster. Hence our capitulation since we lost them both within a fortnight of each other.

Aww, he’s like a little puppy – how can anyone not love Santi?

Biggest miss of the season

Him? Or that penalty he took ehen he got injured? Honestly though I miss the little guy so much.

Note to self, keep shit jokes to myself and find the w key.

Still wont accept that he was allowed to continue playing in that game. Poor mismanagement from the medical team. How long would he have been out for if he was subbed after the tackle, surely not 5 months.

I genuinely think he is that important.

Also…Don’t read this ‘book’!!! it’s rather disappointing as you might imagine.

Just help them get 3rd please
Such a disappointing season but again, if anyone had offered me the chance to finish above city, chelski, manure and loserfoolat the start of the season, I would have grabbed it with both hands. Been such a freaky season all round. Miss St toteringham tho

There’s no silver lining to this season.

In hindsight. Cazorla getting injured started our rot. He was too influential in our system that was getting the best out Ozil and others and balanced the shit out or attack and defense. Had he been fit, or had we a player who could’ve done a similar job, we would be 10pts better off.

I hate wenger for playing Cazorla when he was not supposed to be playing but because Cazorla always hates not playing so he played and we paid.

With Wenger we will win!

Get out while you can Joel!!

Also wondering if there is a plan to find a successor for Santi next season. ElNeny is clearly an Arteta replacement. We can use a creative midfielder in the middle with Rosicky possibly departing as well. It’s disconcerting the number of players that we might need in the summer just to maintain status quo let alone improve.

What, even cheese strings?

Just hasn’t been the same without him. Nobody turns defence into attack like Santiago. Shit.. nobody does pretty much anything he does, like Santiago

Sometimes I wonder why we don’t sub players off after a situation where they risk injury. Could it be because Wenger doesn’t want to disrupt the flow? In this case it clearly means either our system is too rigid or our bench is too shallow.