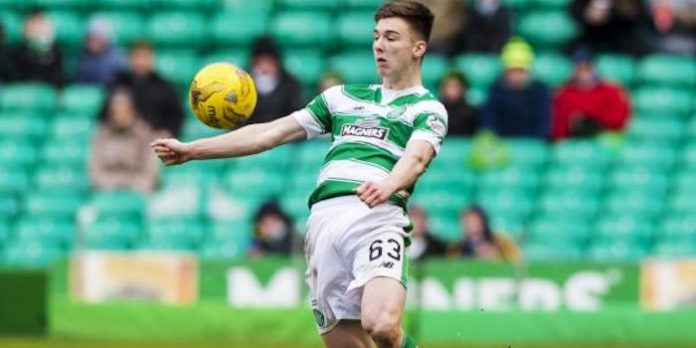 While much of the focus this transfer summer will be on what Arsenal do in terms of attackers and midfielders, there’s work to be done at the back too.

Kieran Gibbs is hotly tipped to be a summer departure as he looks to play regular football again having fallen behind Nacho Monreal in the pecking order. The Spaniard is no spring chicken though, and at some point a succession plan has to be put in place.

Monreal signed a new deal in January, but having back-up for him if Gibbs go is one of the key issues this summer.

Today, we add another name to the list as the Daily Record says that Arsenal scouts have been watching 18 year old Celtic talent Kieran Tierney. The 18 year old made 34 appearances for the SPL Champions last season, and would fit the bill in terms of profile – someone who could understudy Monreal for a couple of seasons, and develop into a first team player.

However, a fee of around £10m seems a bit high. As such we’re giving this one a six on the transfer poo-o-meter (where 1 is a rock solid no wiper and 10 is a flaming hot torrent of lava that scorches your ringpiece on the way out).

Quality player – similar to Monreal in that he doesn’t over commit in attack, so could work well with Bellerin. Good crosser and very strong in the tackle. 6 foot 2 and quick with it. I’d be very happy with signing him, though I’m not sure he’d want to give up first team football at Celtic yet – he’s a lifelong Celtic supporter.

But his name’s Kieran! Just like Gibbs! We could have a younger, whiter Gibbs, better in every way! Racist jokes aside, I don’t think Gibbs will be allowed to leave, it’s too contrary to what Wenger has been building these past few years. In my opinion, Gibbs should be held on to for at least one more year before a decision is made by either the player or club. He’s only 26, so selling him at 27 means we’ll recoup a good fee if he has more chances to perform. Also If Monreal leaves after next season, there will be… Read more »

I was just thinking about this the other day. What about Gibbo? Wouldn’t it be in place to actually start rotating him into the team for real? El grande Nacho is 30. It would be such a shame to let Kieran go, a long time Arsenal player, loves the team and has always been working hard. He is quality and I reckon with enough of confidence of starting and routine first team game time he could be great.

I’m afraid I disagree. While he certainly has the quality to be a good Premier League left back, but with his often-suspect defensive positioning (he gets caught too far upfield too often) and average delivery in the final third, I think he’s just short of the level a top club like Arsenal needs. If he wants to stay as backup, great, but I think he’ll leave to play regular football. I will always love him for that goal-line clearance in the FA Cup final against Hull though. Kieran always gave 100% for us when he played, is a fan and… Read more »

Couldnt agree more. When nacho first arrived it was gibbo that kept him out of the team for the majority of the season and most people thought he wouldnt make it with us.

Look what happened and now its been a sensational 18 months for nacho. Abit more rotation next season and there’d be no reason why gibbo has to leave. I cant imagine we could buy better then him either thats willing to fight it out for his spot. He’s arsenal through and through, i would be surprised if he leaves.

I think, unfortunately, there are also a lot of injury question marks over Gibbs still too.

The main football website in Australia last week suggested Tom Rogic from Celtic was also an Arsenal target. Theworldgame doesnt usually post shit so there must be some background noise there.
Anyone heard anything?

First time in a long time we haven’t had an exciting prospect waiting to come through at left back, it’s a position we’ve had decent fortune with over the years. As much as Gibbo is an Arsenal man, he’d be silly to spend another season on the bench when at his age he should be at the peak of his powers. This is part of why I can’t believe Arsene was being honest with his “3 transfer targets” story. If we include a leftback, a rightback, at least 1 midfielder and at least two forwards that’s a minimum of 5… Read more »

I think 3 transfer targets would be the aim, if only Flam, Rosicky and Arteta have left this summer. If Debuchy, Gibbs, Theo, Ospina or anyone else leaves, we certainly shall need to replace them, or promote someone from the youth teams. We also have our loan stars coming back, and guys like Jenkinson, Scz, Sanogo and Hayden will be evaluated before any further signings are made. I just hope we sign people early, like Bayern did, to give them time to settle in…

I don’t think Arsene’s going to let Gibbs leave, and for me he deserves to stay.
He is Arsenal through and through.His celebration with Wilshere on the sideline was special to watch wasn’t it?
Classy Lad.

Exactly – still seems pretty invested in the club if he celebrates like that! Let’s hope he stay on and fights for that first team spot

Ten million for an eighteen-year-old fullback from Celtic’s academy? Haven’t we already got better in our own academy, not to mention in Gibbs? If not, I can’t believe there aren’t kids with equal potential, plus a much better technical education, to be found practically anywhere in Europe available for less than a million. When was the last time Celtic’s academy produced a good player? So poor has Scottish football become the Scottish clubs themselves have had buy in talent from elsewhere, e.g. the excellent Virgil Van Whatsit whom Celtic got from the Netherlands and sold on to Southampton and who… Read more »

When was the last Scotsman to play for Arsenal. Charlie Nicholas? It is about time.

I’d wager it was Paul Dickov.

Pretty sure it was Scott Marshall. Didn’t he score vs Newcastle around 95-96ish?

The Power of Merse
Reply to  Crash Fistfight

Nah! Scott Marshall. I thought he would be the Scottish TA for about two or three weeks.

Oops did that twice as the first time reported an error sorry blogs. Plus then I switched names and changed the comment. Ah well…

the best young left-back I’ve seen in a while is Bologna’s Masina. especially his defensive side of play. he is really something!
and most complete left-back (who is not already playing for a big team) Wolfsburg’s Rodriguez.

If we’re really letting Gibbo go, Jose Gaya of Valencia would be a great addition. A left legged Bellerin really, in his own words “He is the left back at Valencia and he is my age. Last year was his first season and he had a very good season as a very attacking left back. His game is similar to mine. I have played with him since Under 16s for the national team and he is a player that I think will go really far in his career.” Hmmm

Too bad we missed out on that other Scottish player…..Van Dijk.

sorry — I meant other player from the Scottish league

The Arse in Namib (AITG)

Instead of a small cartoon turd with eyes why not go the whole hog and use a picture of Donald Trumps head for your shitometer?
In its favour, his barnet has a twirl that would make Mr Whippy smile,he is known for being a complete shithead and Donald Dump is a well known pseudonym.
Or is arseblogg scared that getting involved in the US election could sour our special relationship a la Cameron? Especially when the US is the only country to bother about FIFA thieving; Dump may claim that the US is the New ‘soccer’ capital of the world.