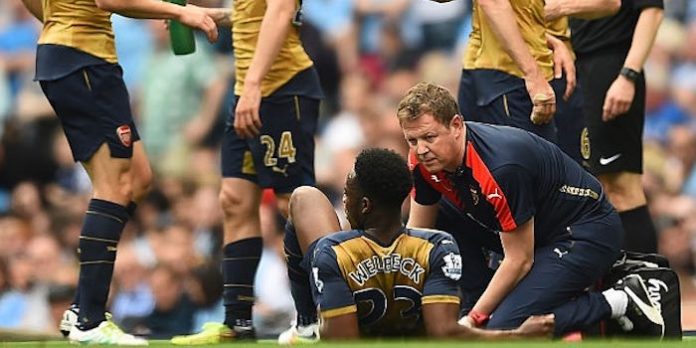 Arsene Wenger says that Danny Welbeck may have torn his lateral meniscus, putting the forward’s chances of playing at Euro 2016 in real doubt.

The striker picked up in the injury in a challenge with former Gunner Bacary Sanga, twisting his knee as he planted his foot. He tried to carry on, but left the field in the 22nd minute, heading straight down the tunnel.

Speaking after the game, the Arsenal manager voiced his fears that Welbeck’s injury was a serious one, but at this early stage it’s impossible to know what the prognosis is.

“I’m worried,” he said. “We’ll try and be optimistic and wait for the scan tomorrow. The first signs, the medical people told me it looks like it is a lateral meniscus – and I hope they are wrong.

“But Danny looks down, so he knows. He’s not a guy who wants to off, so I’m a bit worried.”

It’d be a real blow for Welbeck, having come back from a lengthy injury absence, to miss another prolonged period, and the summer international tournament.

This new injury is not the same knee, so it’s not a side effect of the previous.

Get Wel Soon. Typical. Poor lad has no luck.

I am gutted for Danny, and the Arsenal…..

Give us fucking break please. And I don’t mean literally

Gutted! Feel for the lad.

Let’s hope it’s not that,
as he would be back in time for Christmas if so………..

by thumbs downing me are you hoping he’s out that long or just a bit “weird”?

If its that how long will he be out?

Feel bad for him, doesn’t deserve another injury! Bit worrying though that we’re supposed to be looking at Sturridge – the medical guys will have no time for anyone else.

Cross all your fingers and toes….this is Arsenal.

How long are typical length of time out on these types of injuries?

Good article on Leicester’s approach to fitness and their relative lack of injuries this season leading them to play with the least amount of changes :

We could learn something from them.

Also worth noting we are third in most goals and shots from the counter which suggest we haven’t been as inefficient on the counter as many make us out to be.

Playing once a week helps.

Yeah, but Leicester played probably like half amount of Arsenal games. It’s much easier to scheldue the training if you not playing CL, and your gone from FA Cup at the begininig of the competition.

Not on a topic, but I just wonder what is going on with Cech, and this low shots from distances, for the second goal should have been saved.

Tell you what.. the day our club asks our entire useless medical team to fuck off is the day we will finally see some progress. The amount of injuries we acquire during a season has got to be the highest for the entire Europe’s top flight.

Absolutely gutted for the lad.

Wellbeck was playing?
Its like having a car accident and saying the manufacturer to stop making cars.
The medical team consists of well qualified professionals. There maybe room for improvement and if u can point that out objectively, great. If not, no need to slag off someone without knowing facts

Edit:no ? symbol
There has also been talk of a cryogenic center at our club.it might help out

There was also a point made in the article that a lot of managers tend to ignore much of what their medical team tell them. If you only think of them as doctors who treat injuries, or people who are always trying to prevent you from picking the players you want to pick, then you’re missing 90% of their value.

Do we actually have any performance psychologists or do we just rely on Wenger telling everybody we’re mentally strong?

I agree. The arrival of Shad has made a difference and there’s no evidence at all it’s the medical team that’s at fault as opposed to any of the other factors – the training regime, the pitches, an inherent injury-proneness in the players we buy, the fact that our squad is increasingly elderly and therefore more likely to be injury-prone. While it’s true that Welbeck lost less than half the number of days to injury while he was at United – around 100 compared to over 300 with us – it would be absurd to blame any of the things… Read more »

Never missed more than 9 matches at United; comes to Arsenal, misses 30. And then again next year… Seriously, this club is destroying some player’s careers.

Didn’t get injured this often at Utd. Are we that unlucky or is there a fundamental flaw in our training regime?

It has to do with our style of play – every club that plays somewhat like Arsenal has to contend with star players being out injured a lot. Welbeck either played out wide for United (which is very different to how we play) or as a pressing striker – he wasn’t expected to score much but he did a brilliant job of disrupting any team trying to build attacks from their CBs. Fergie’s wide play was all about getting as high up the pitch as possible before firing a pass (not a cross) back into the box. Wenger wants his… Read more »

Please explain how passing to overlapping fullbacks or cutting inside makes you get an injury.

We do more 360 degree turns/spins than United used to? Lots of lateral strain on knees and ankles.

Que the ‘oh well, at least this might mean we buy a striker!’ comments.

Oh my days, we just don’t have any luck do we 🙁

Danny is a fighter, he’ll be back soon. Wishing him a very quick recovery.

The lateral meniscus is cartilage in your knee which absorbs shock. Once it is torn it does not heal without surgery.

Fingers crossed he comes back fighting fit next season

It’s different depending on what’s done. Mine was a complex lateral tear resulting in arthritis and after key hole I didn’t need crutches, and a week later I was walking 2 miles in a day and up and steps at a stadium. Never even took any of my codeine or ibuprofen after day 2. I returned to light running after 2 months and a further month on I’m able to do squats for the first time. Also a lot people just have physio (a lot of debate in the profession about this at the mo). So – hopefully a pro… Read more »

I hope Danny ok, he such a wonderful talent…

Terrible news. He had been great since coming back from his previous injury. I hope it’s not as bad as suspected and he can make a speedy recovery.

If Pep, our manager he will kill our medical staff