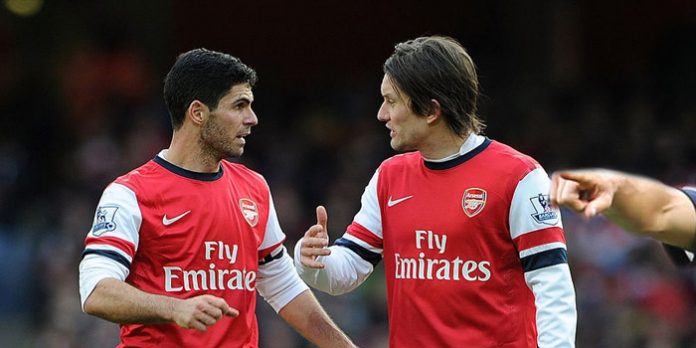 Arsene Wenger says he doesn’t yet know if Mikel Arteta, Tomas Rosicky or Mathieu Flamini will play in the final game of the season against Aston Villa, but he has paid tribute to their contributions as their playing contracts expire.

The three are set to leave the Emirates this summer, and it would be nice if they could play a part in Aston Villa match, however the Arsenal manager was unsure if they’d be in the squad.

“I don’t know yet,” he said when asked if they would be participating, before speaking about their impact on the club.

“Mikel Arteta is the captain of the club and has been a great leader,” he said.

“Tomas Rosicky has been with us for 10 years and I think everybody loves him as well. Mathieu Flamini has been an extremely strong leader on the pitch and off the pitch. We lose three big personalities.

“All of these players will have to decide if they go on in their careers as a football player or a coach.”

“They all come back, always.”

We all float down here.

Good luck to them.

IT reference made my day

Did you see that ludicrous display last night?

What was Wenger thinking putting Walcott on that early? 🙂

And that statement still applies, yet that episode is like 5 years old.

I came here to drink milk, and to kick ass. And I’ve just finished my milk

ASyD was referring to the Stephen King one, not the IT Crowd 😉

Jon with a J

That two goal salvo…. what a game that was https://www.youtube.com/watch?v=IE3Ql2al6_k

Don’t think arteta gets the credit he deserves off some he joined the club at the worst possible time and helped steady the ship somewhat when we could have easily dropped out of the top 4. Good luck to him. What a pity rosicky was injured so much when fit he was immense. In his 2 spells at the club i thought he served us well bit nuts at times but hey that’s flamini.

Will miss the other two as they have been greats servants to the club as well, but dear god will i miss Tomas the maestro. dont give his and Robert’s 7 shirt to just anyone…

Nickgooner
Reply to  the american

Well that’s easy, we can give it to Reus when he signs.

A man can dream for fuck sake!

Thumbs down for that? Oh come on people!!

Good luck to them all. Enjoyed watching them.

Rosicky has to at least play a part of that game. One final bow at the emirates

Having Arteta earlier in his career would have been a cracking signing, before his cruciate injury he’d much more power and ability to get around the pitch, still he came in and settled us down after the early season nightmare in 2011, overall an astute signing.

Rosicky is the big regret though, injuries really destroyed his career, was capable of so much more. Those mysterious 2 years out in particular took their toll. Wish all three the best

Have Flamini and Rosicky really played an identical number of games?

With all due respect, but we shouldn’t risk losing our 3rd spot just so we can honour them. Plus it would be better if we could pay them respect in a more relaxed testimonial instead.

Top characters and I really hope Arteta will become part of our coaching setup. His immense experience playing as a balance player would be of high value to our team!

TommyTee
Reply to  someone's something

At 3 nil up then we can sub them all on I think.

Jan
Reply to  someone's something

Artera is rumorued to go to man city for his coaching badges. Flamini will invent an alternative energy source, get super rich and buy Kroenke out of the club! And then spend some real money on players with champions league ambition. One can dream right?

Yankee Gooner
Reply to  Dave A.

Or have Flam buy out Stan

Dave A.
Reply to  Yankee Gooner

Now that these 3 are leaving, does it mean jersey number changes for Alexis, 7 and 8 for Ozil, numbers they both wear on national duty?

I don’t like thinking about Rosicky too much. Upsets me.

I read Jacks Instagram about Tomas and I’m still crying. I really wanted us to win something this season because it was the last season for these three who each in their own way gave us so much. I hope that wherever they end up they are happy, I’ll always have good memories of them, and I really hope Mikel can stay as a coach.

How strange that Flamini and Super Tom have played the same amount of games.

I hope Flamini makes enough save the world money to buy Arsenal and save us from Stan.

Rosicky would’ve been so much more if not for injuries. Makes me sad that we never got to see a fit and in from Rosicky for a full season. He’ll definitely be missed.
Arteta was superb in his first 2 seasons with us till injuries and age caught up with him. I think Wenger persisted with him for a bit too long hence the reason why his contributions in his first 2 seasons might be forgotten by most.
Wish them all the best…

I remember watching Arteta when he was playing for Everton and wishing he was an Arsenal player. Was over the moon when he signed. Wish he was fitter these last couple of years. Great player …

We signed him 2 seasons late. He should’ve been signed when Cesc, Nasri and Arshavin were still around.

Have Rosicky and Flamini really played the exact number of games?

Sweet dreams little Mozart, will always remember you at your best, zipping around the pitch, picking up a ball and launching straight up the field looking for the next pass to make with the outside of your boot. And that sweet, sweet bombastic strike to the opposite top corner at White Hart Lane…

Remember when Mark Lawrenson said Rosicky was too afraid to tackle. What a bellsprout.

Get a big lead in the game and bring all 3 on! That would be a great tribute to these players. Of course, Arteta and Rosicky will be hurt within 5 mins and there’s a great chance Flamini will get a red card as well 🙂

Can barely think of a more fitting swansong for Flamini than getting sent off for a bonkers challenge he had no hope of making cleanly.

Hope he goes on to save the world.

I’d love it if Shawcross could play for Villa for just one game so Flam can leather the fuck out of him.

I think we will require the minimum of five players to replace and strengthen considering the leaving midfield trio besides Debuchy at right back and the injury to Welbeck and hopeful departure of walcott. .

Not to mention contract extension for Ozil and Sanchez. ..

As for AW I don’t think the club can afford not to offer him new contract…problem is will he accept it?…finger crossed ..hope does

Rosicky is even loved by people who don´t even support Arsenal. That says a lot about him. I really wish we could have just gotten to see him for 1 full season without any injuries, imagine what he would have been able to produce

I will miss all 3, but when Rosicky leaves Arsenal little part of my Arsenal love will die. That’s how much I love that guy. Hope he will play on Sunday.

I hope he pulls out his guitar during his testimonial to give us all a kick-ass solo to remember him by.

Rosicky is my favorite player at the club, my summers are spent watching youtube compilations of hes best games

Strangest thing is my Dad thinks he useless and plays risky football, but what does the old man know 🙂

Best of luck to all 3 of them in whatever they decide to do in the future.

Special thanks to Tomas for scoring the greatest goal I’ve ever had the good fortune so see in the flesh https://youtu.be/bU2dQMz1FF0

They all had their flaws but gave absolutely everything for the shirt with some very memorable moments along the way. Thank you lads

That has to be flamini doing his thang. ?. Pointing at what needs to be pointed at.

That’s over 100 points per minute played by Flamini. Amazing.

Wore my Rosicky jersey to work today in his honor. Is there any chance that he plays against Villa on Sunday?

He’s departure would affect me deeply. Life is so unfair.

Imagine life as an arsenal fan if Rosicky n Diaby were injury free.

It was a great time back in summer 2006. Despite the disappointment of the CL final, Henry said he was staying (yeah right) and we signed Rosicky, who then scored some screamers in the world cup. Rosicky became my favourite Arsenal player and even now, when he’s not playing, just knowing he’s there is somehow kind of reassuring. It’s really hard to see him go and the end of an era for sure.

Why we love arseblog in 1 post right there. Those stats almost brought a tear to my eye – I’ve enjoyed having all of them in the squad over the years for different reasons. Tommy and flaminator goals against the spuds might be tops tho

Cant help thinking he’ll suit Leicester’s style of play.
I hope they they him.

I just spotted the pointing arm in the picture. Played Bloggs!