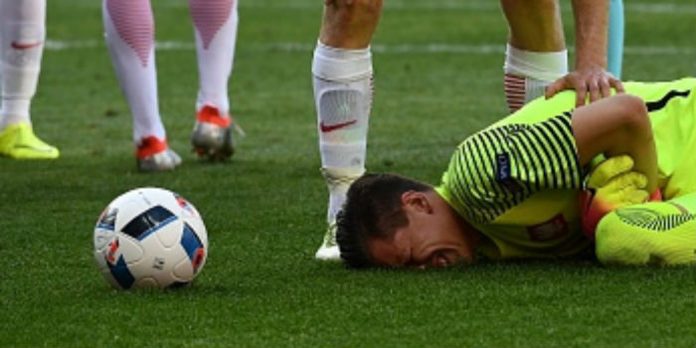 Mixed emotions for Arsenal participants in France over the last 48 hours. Here’s how they fared…

Having been sent off in the first game of EURO 2012 – on home turf no less – it’s fair to say Wojciech will have enjoyed his clean sheet against Northern Ireland although reports suggest he may have picked up a thigh injury.

Szczesny played the full 90 minutes despite a collision in the first half and is undergoing tests in Nantes to determine whether he’ll face Germany in three days time.

The Poles dominated their opener from start to finish but only found the net once; Arkadiusz Milik’s clinical second half strike enough to seal the points.

Speaking after the game Szczesny dismissed speculation about his future, stressing his focus is on Poland’s EURO campaign.

“My teammates and I are focused exclusively on the Euros. I hope to achieve a good result with Poland, I’ll only think about other things once the tournament is over.”

Mesut Ozil delivered a sumptuous stoppage time assist as Germany overcame Ukraine 2-0 in Lille. The Germans rode their luck at times against the plucky Ukrainians before the Arsenal midfielder broke their hearts with a lung-busting charge down the left wing that ended with a killer pass for Bastien Schweinsteiger to finish on the half volley.

Özil assists Schweinsteiger who secures a 2-0 win for Germany pic.twitter.com/Wt6ROFYSBP

“I think it was important for him [Schweinsteiger],” Ozil told reporters after the game. “He was injured for a long time and with that goal he’ll probably gain a lot more self-confidence.”

Petr Cech made a string of fine saves to frustrate Spain only for Gerard Pique to head home a winner for La Roja with three minutes remaining. The Gunners keeper was at the top of his game to keep Alvaro Morata at bay in the first half but could do nothing as Pique headed home a late teasing cross from Barcelona teammate Andres Iniesta.

Tomas Rosicky cut an energetic presence in the Czech midfield but found it tough going against Spain’s possession game. He was clearly frustrated to be substituted in the moments after Pique’s goal although he might have been cheered had teammate Darida buried a last-gasp chance on the volley in stoppage time.

Hector was an unused sub as Spain beat the Czechs.

As soon as Ozil got that ball you knew the ball would end up in the back of the net.

Cannot help but notice an interesting thing about that assist though…. Ozil was the player furthest forward yet he is pointing for the ball to be placed out wide, when he could have gotten it ahead of him to score on his own. Yeah ‘assisting’ on the responsibility..lol. He was probably lacking some confidence after the earlier one and one he fluffed.

It’s not a thigh problem; Szczesny has a “nyyyyy” injury.

After listening to Robson tun down Mesut Ozil all day on the US TV coverage that sweet Ozist was excellent, both on its own terms and because it forced Robson to eat his words.

Whoops run down not tun down

Well he probably did it about a hundred times.

We should go out and spend every last penny on Banucci. What a player.

I still struggle to accept Tomas Rosicky isn’t with us anymore. Not just because I think he’s great and can still have a role but Ramsey. Ramsey is similar to Walcott in that one game he’s great n in the next awful, there seems to be no middle ground. Life is harsh

Anyway injuries aside I would pick 35 year old rosicky over Ramsey and I do not hate Ramsey by the way just way way inconsistent.